So at the end of last year I didn't get a lot done due to preparations for moving house, and all the crap involved with that (and a number of screw-ups and damages along the way, most of which came from the moving companies).


Anyway, onto the new year, and I've already completed one monster this year: Yig, Father of Snakes. 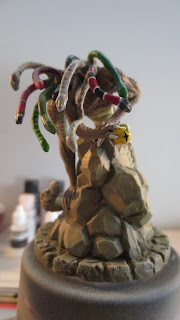 This is the father of snakes. In Mythos lore he turns those that have displeased him into snakes, specifically spotted snakes. As such, a number of the snakes making up his 'head' are spotted, speckled, or use patched patterns found on vipers and pythons.

The other snakes are far more colourful, ranging from deadly coral snakes and the infamous black mamba to the relatively harmless milk snake and the emerald tree boa. 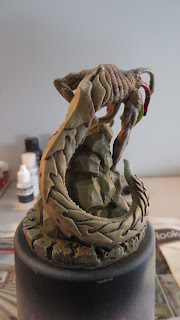 The scales had the base, but were given a highlight of 50/50 khaki/buff before the wash. The belly scutes (more visible in other pictures) were painted buff, then given a shading wash of 3:2 stone:dark sepia. 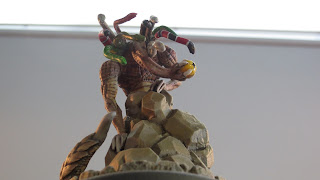 A low angle view showing off what puny mortals might see.

The rocks were painted much like the back plates, but used desert yellow for the heavy drybrush, and a wash using the same mix as the belly scutes for the recesses, then a very thin wash to knock back some chalky highlights.
Posted by Ravager Zero at 20:35