So, after many months of being lazy and working on other projects, I have finally finished painting the Yellow Sign forces for Cthulhu Wars. 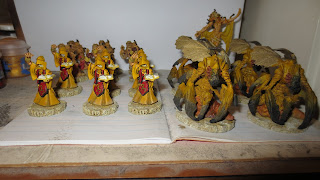 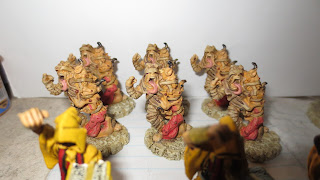 The Undead hordes, pulled from the desecration of the world.

I tried to keep these guys simple, but in the end there wasn't enough contrast so blacklined the bandages and shaded the tentacle tips. 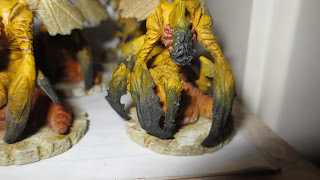 The Byakhee, winged horrors not of this earth.

I tried my hand at some two brush blending on these guys, using black over yellow, followed by a wash of dark sepia. 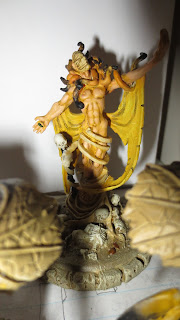 The King in Yellow, a lesser avatar of Hastur, and the embodiment of his desecration. His power is to corrupt the lands to increase the power of Hastur.

The flesh took the most time on this guy, being about eight stages, with a transparent yellow intermediate layer. The base is just drybrushed with small details picked out. 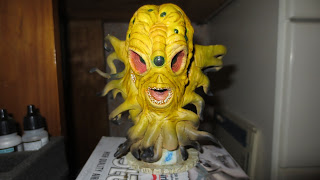 Hastur, He Who Is Not to be Named. On the dais we see that Elder Signs no longer hold him back.

Shading the yellow proved something of a task over such a large area. The tentacles are my first real attempt at airbrush blending on any kind of detail. 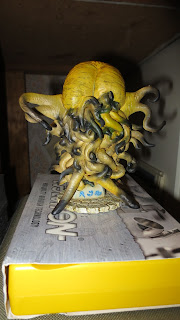 From the rear Hastur is no less intimidating, a great mass of writhing tentacles and malign intent, and carved into the dais the symbols of his rule over the desecration.

The symbols didn't come out exactly how I wanted (more of a glow effect was hoped for), but the effect is nonetheless good, and I like the way the blue acts as a spot colour against the yellow and sandstone. 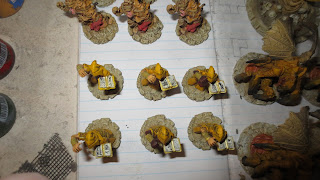 Acolyte cultists, loyal to the Yellow Sign itself, and capable of bringing forth the minions of Hastur into this plane.

Each spellbook is slightly different, though the cultists are the same. This is about the only place I can really put in any individuality, so I go to town on it. 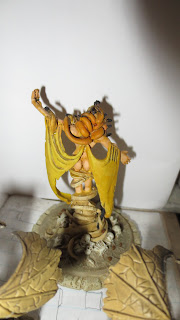 And something a little cheeky to end 2015 with. For a boardgame, these miniatures are lavished with detail, some of it subtle, some, not so much.

As one might guess form the title, I got some Cthulhu Wars swag for Christmas. (Actually arrived on Monday, but it's been a bit nuts this week). So, without further ado, the stuff (which also joins my ever-growing painting queue). 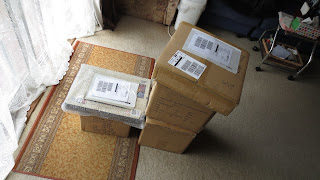 Yeah, this stuff is kinda bulky, and comes in very nice thick cardboard printed packaging (which I did not, in fact, think to photograph). 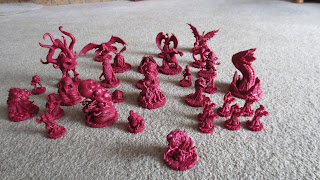 The first part of the 'one of everything' bundle for being a KS backer of the original game. These might become display pieces or something. 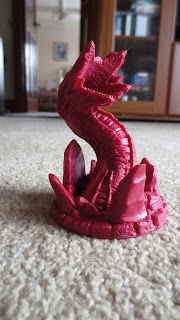 I especially like the Bhole… and in game it's horrifically evil as an indestructible Great Old One with 6 combat dice. It also has a nasty habit of eating gates—and everything on them. Whole. 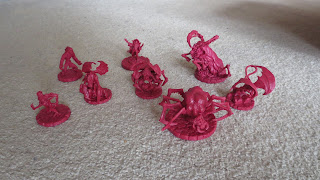 More stuff. Includes a couple of monsters from the core game that aren't in the top photo. 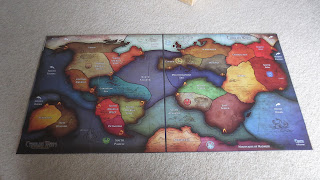 The 6-8 player Earth map. I have a 6-8 player Dreamlands map on pre-order from the Onslaught 2 KS. 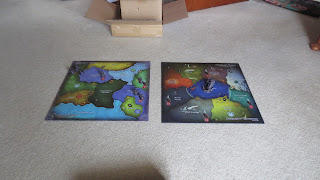 The Dreamlands map… or maps. They don't 'wrap around' like the Earth map, but tunnels like the Surface and Underworld of the Dreamlands. 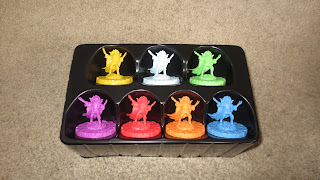 High Priests. One for every extant faction. Sacrificing them grants extra power. 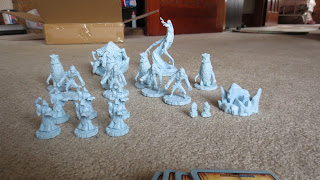 Ithaqua, the Windwalker faction. Starts at the poles, and creeps forward. Playstyle is to cause attrition damage to opponents and them hibernate to conserve power for next turn. Also gets to summon monsters in any battle where casualties were caused. 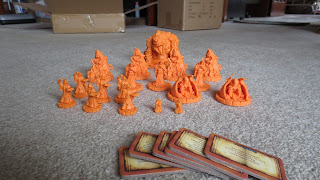 Tsathoggua, the Sleeper. Can steal other factions spells and abilities for temporary gains. Also gets a free monster every turn. Not particularly tough, but has some devious plays, like capturing and sacrificing enemy monsters, or holding a gate in suspended animation. 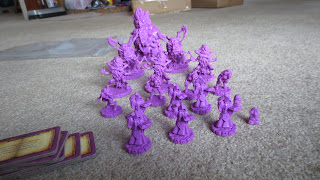 Yog-Sothoth, the Opener of the Way. He (it?) serves as a gate. His monsters can be promoted through various forms instead of being summoned. In addition, he can start anywhere (that isn't already occupied), and can shuffle gates around with his spellbooks. 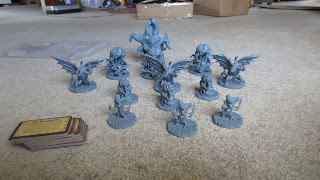 Azathoth, the blind idiot god. This is a neutral faction, and anyone can pay doom points to buy his monsters' loyalty; or trade their spellbooks for his. 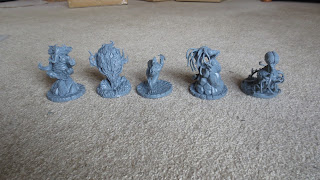 Great Old One pack one. Five flavours of gribbly that can be summoned by anyone willing to pay for them. Some are good for you to have, some are bad for your enemies. 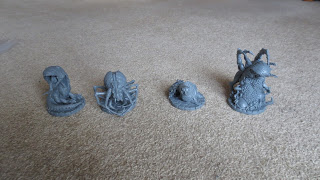 Great Old One pack two. Only four gribblies, but each has a very nasty flavour. Bokrug is immortal, and destroys your enemy's infrastructure when you give him as a 'gift'. Atalach-Nacha spines webs of fate that can win the game. Father Dagon makes the sea yours to command, washing your enemies into it. Ghatanothoa mummifies enemy cultistis, preventing them from doing anything in the doom phase.
Posted by Ravager Zero at 23:09 1 comment: