Out of place, out of time (USMC vs Japan, somewhere in Normandy…)

So let's start by getting one thing straight: I'm terrible at this blogging thing. Thank you and goodnight. No, wait—I have a BatRep for you first. Maybe I'll even remember to occasionally post y building/painting progress here too. 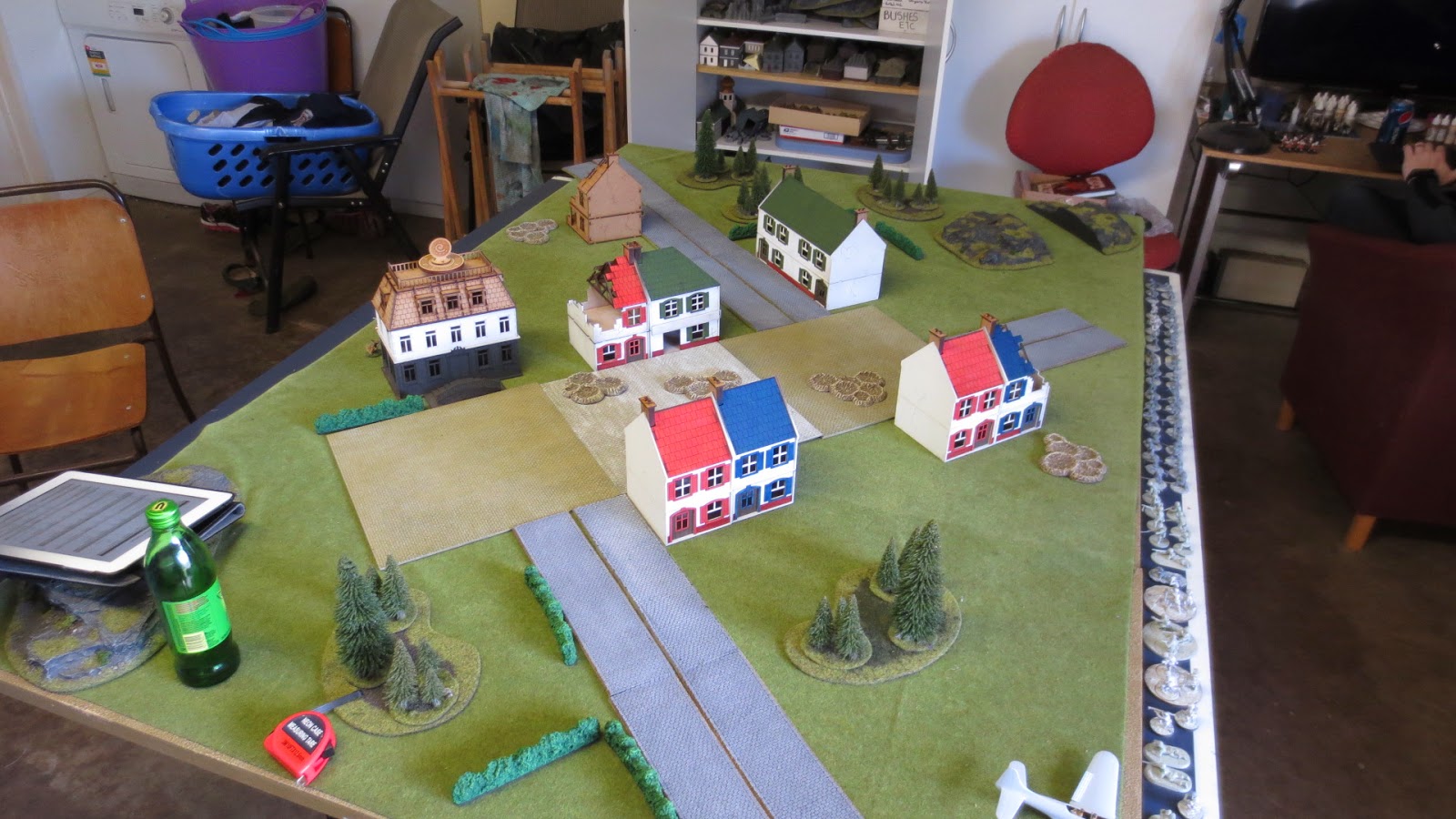 So, this was our battlefield. Nice open centre, good cover towards the edges. Sort of, anyway. Lots of buildings to run through as well, good for some missions, bad for others.

So, first mission playing against Rob, and his Imperial Japanese Army. #4 in the scenario list; Hold Until Relieved. Turns out the japs were holding something important, and my first USMC division had been tasked with getting it back. 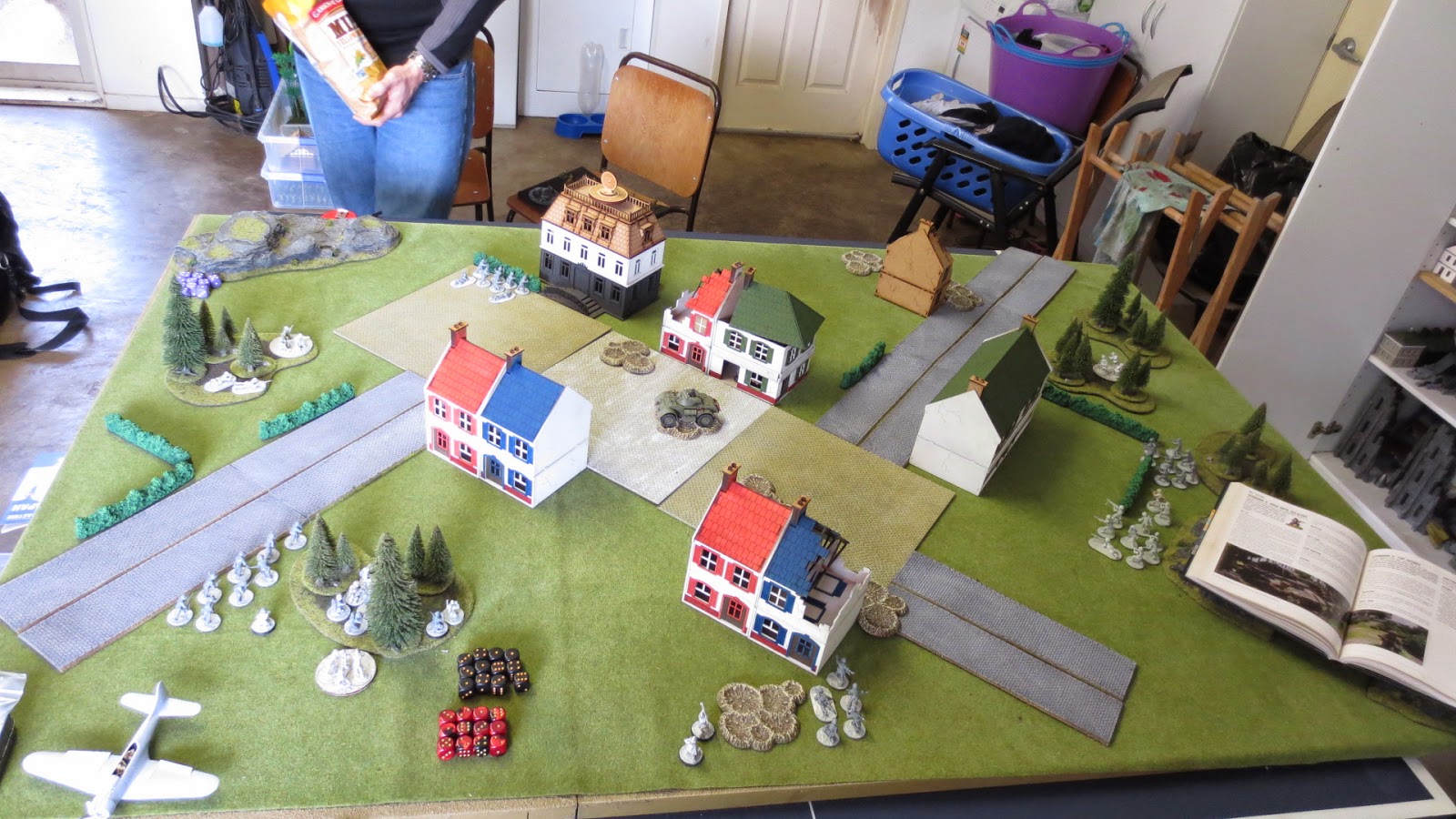 Thus the game began, Rob having set up an MMG and a veteran infantry squad in the building adjacent to the objective. My Marines could deploy every infantry unit on the table, at least 18" from Rob's units and the objective. One time playing an infantry platoon is more fun.

No, I'm afraid you won't see much paint on my models. Rob, on the other hand, has put as all to shame with his speedpainted IJA.

Squads set up in a rough encirclement pattern around the objective, preparing to take the buildings nearby and fight room to room if need be. My twin MMGs were set up in forward positions on opposite flanks, while one brave (if ultimately foolhardy) USMC squad formed up behind some hedges to take potshots at emerging Japanese troopers. 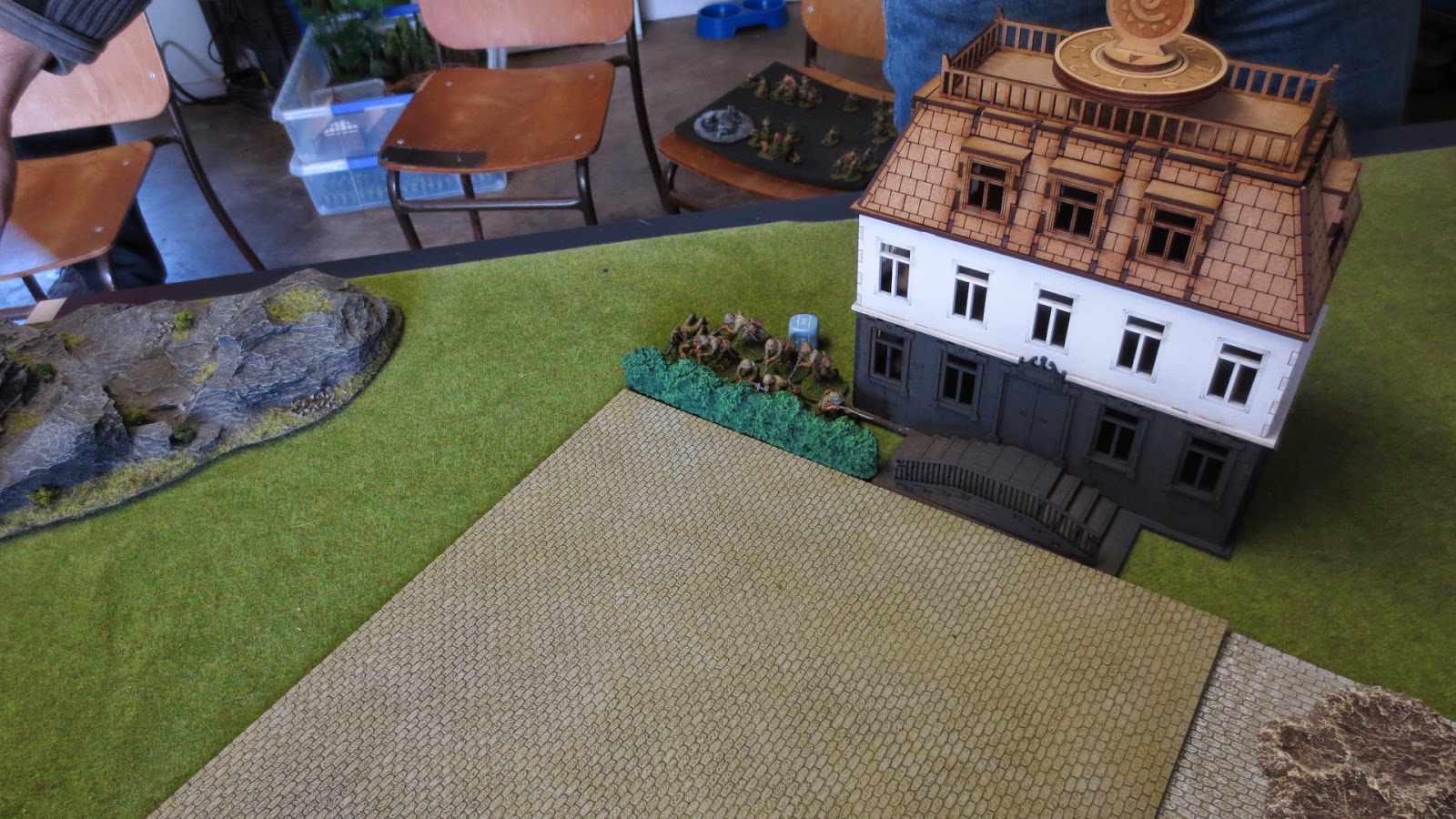 This rather proved to be a mistake, as they were within 12" of the board edge, allowing Rob's troops to assault on the turn they entered. This was the second order of the game, the first being mine, placing an airstrike on Rob's MMG in the building, the only target my Forward Air Observer could see to vector in a strike.

The unfortunate Marines in the corner murdered four incoming Japs with reaction fire, and brought down another two in melee, but sadly, it wasn't enough to stop the fanatical Japanese troopers. 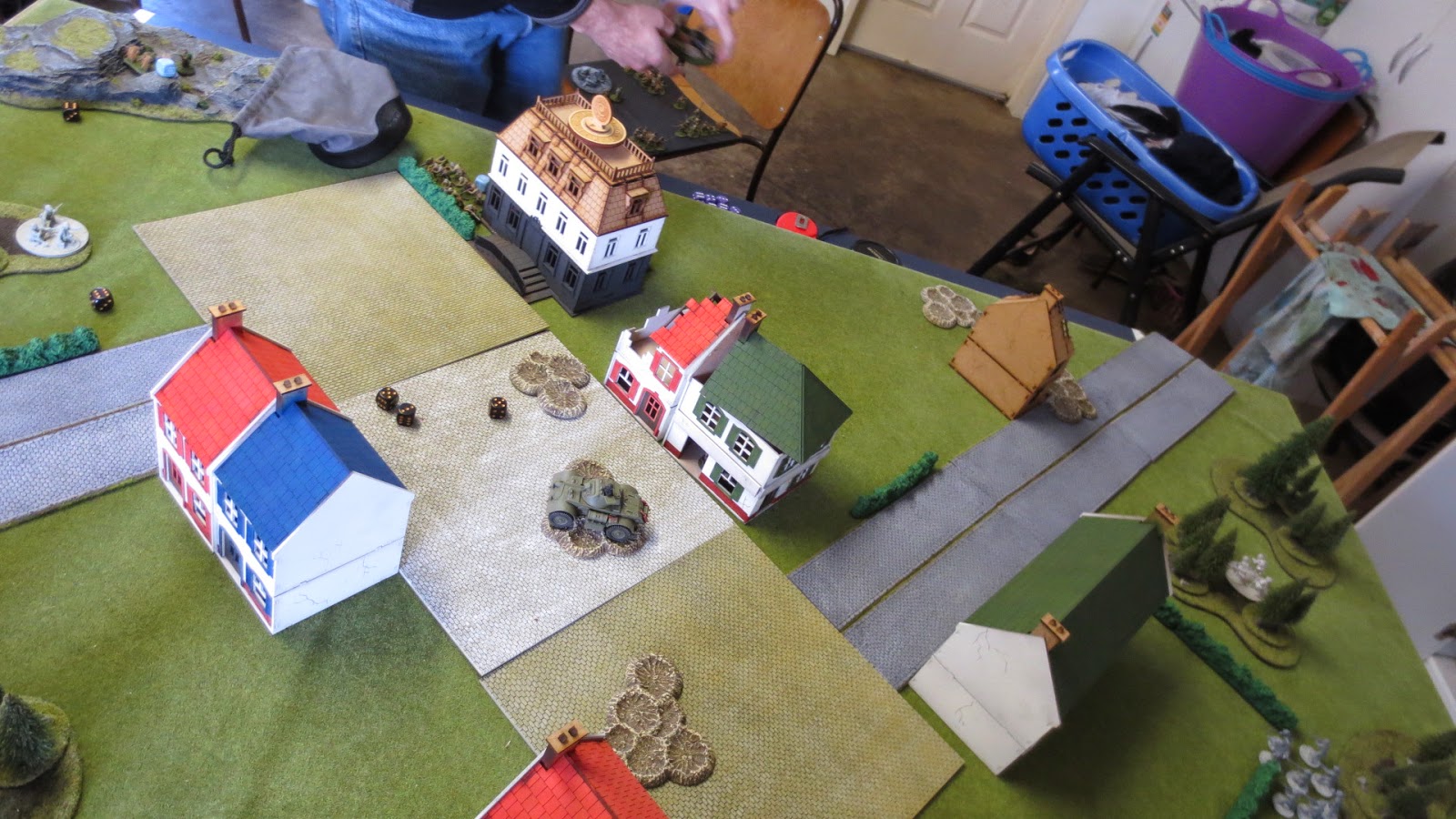 The next major event was my medium mortar getting a round off, managing a hit with the first shot—requiring a 6 to do so. What followed was a chain of luck so good it was almost painful. Because the mortar shell crashed through the roof, exploding in the midst of Rob's MMG team, all three members fell to the high explosive, removing the need for an airstrike. The mortar was to prove just as effective the next it actually managed to hit anything, several turns later. 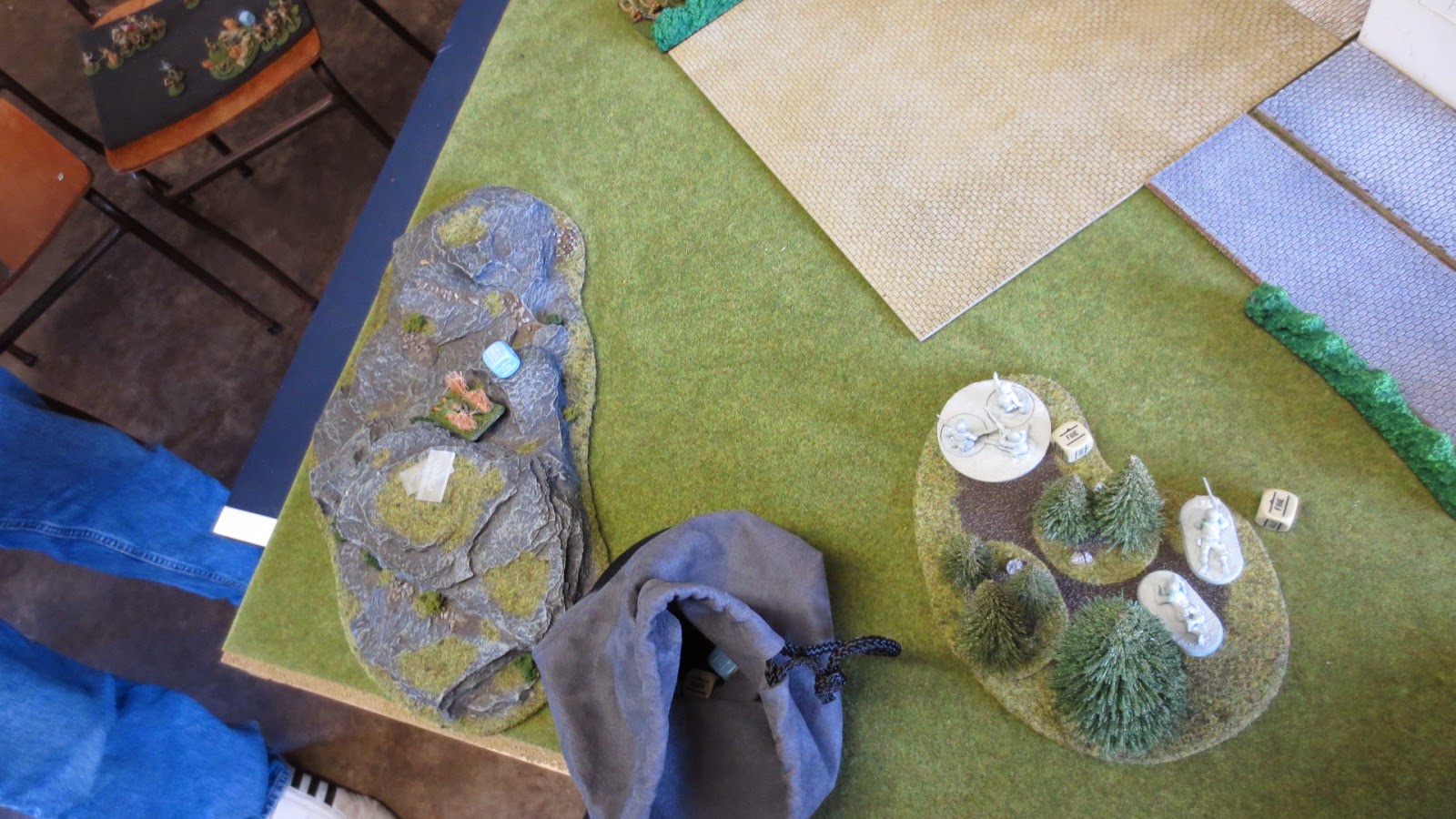 A comedy of errors in sniper vs sniper warfare followed, my sniper hitting but failing to wound the Japanese marksman, the Jap sniper failing to hit at all (needing only a 2), and my MMG causing only 1 wound out of 4 hits. It was enough to remove the threat of that sniper for a couple of turns, which was a welcome change from what Will's sniper normally does. 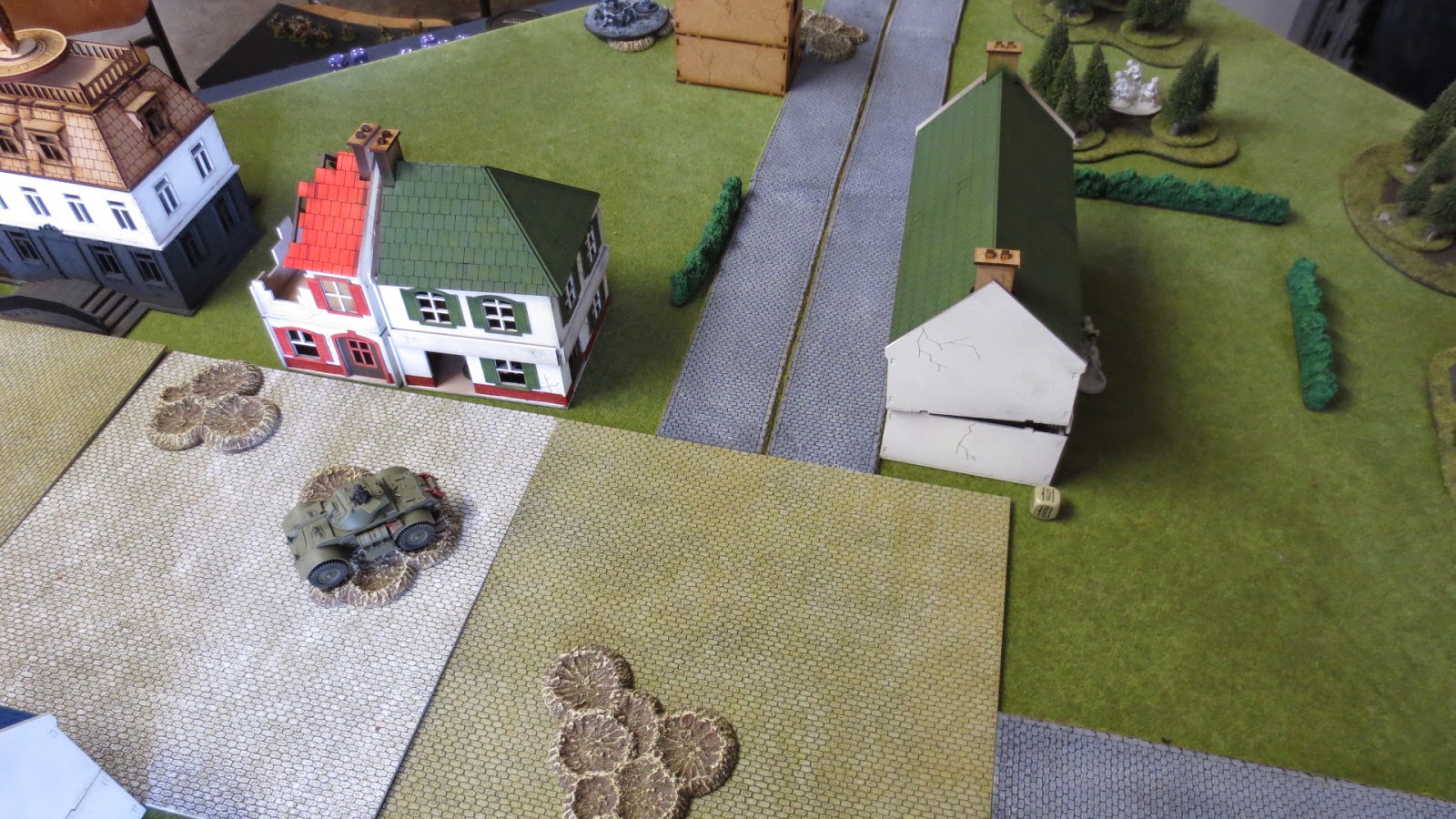 The rest of the turn was all movement, squads entering buildings, and Rob bringing on the rest of his first wave. My airstrike turned up promptly, strafed the empty top floor of the building, and left.

The turn opened properly with Rob bringing on a couple of units, then I rallied my Marine squad in the south-central building from 4 pins. The First Lieutenant's +2 Morale bonus proved invaluable this game, helping pass six order tests at insane numbers. 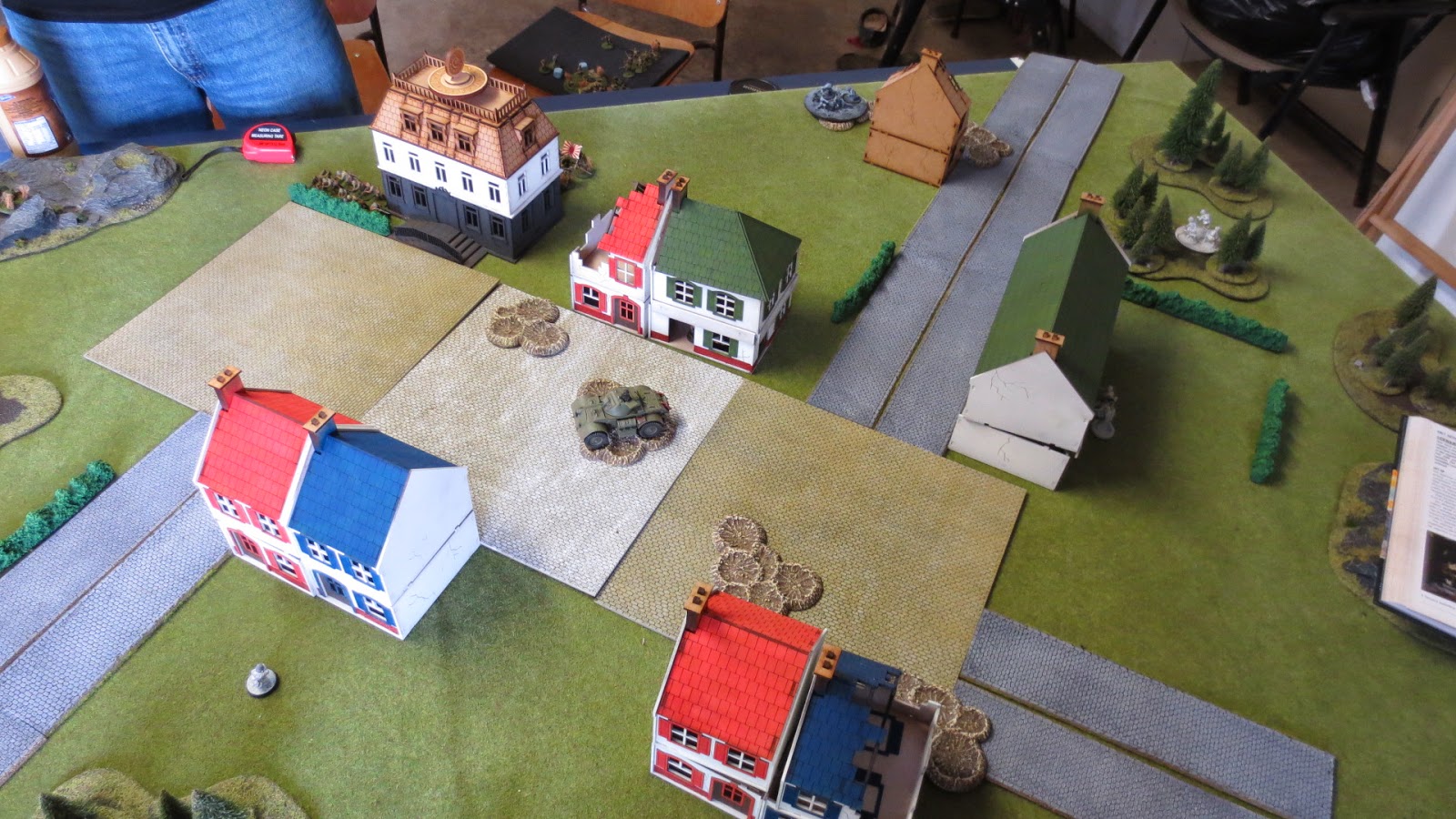 The rest of the turn was once again rather uneventful from what I remember, mostly those troops that had fallen short last turn now entering the buildings to the lower left of the picture, while other pinned units rallied.

Rob managed to get most of his reserves on this turn as well, getting lucky with his reserve rolls, and even luckier with his light mortars in his grenadier squad, shelling my Marines in the north section of the long green-roofed building. 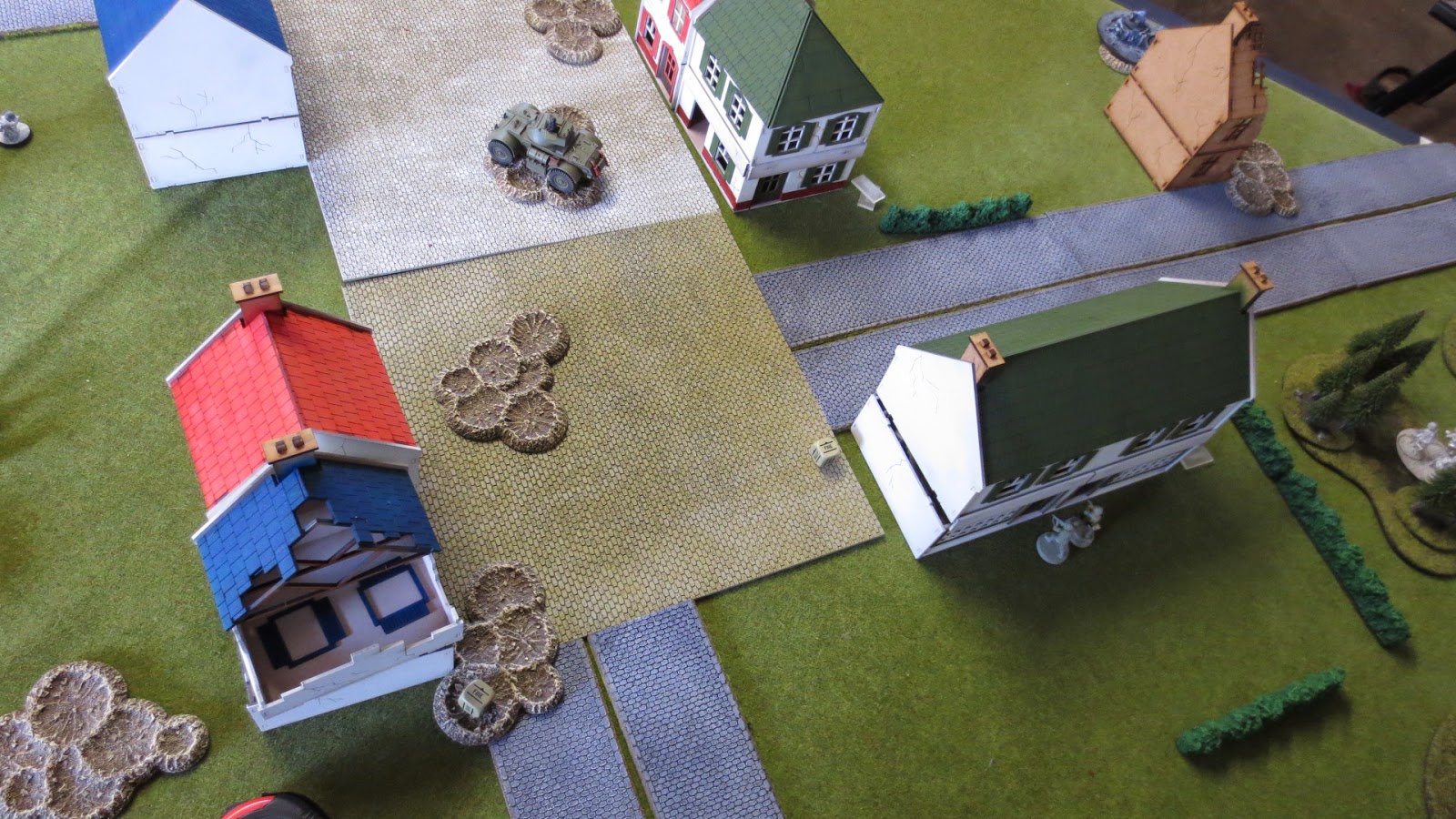 Turn three opened with a storm of fire focused on the lower level of the central building, starting to build up pins on Rob's IJA veterans in there. If you really want to pin a unit, you have to throw the kitchen sink at it—so I did.

The bazooka, as usual, missed every shot, leaving the house with some nice new windows and open plan living arrangements while only mildly inconveniencing the Japs occupying it. 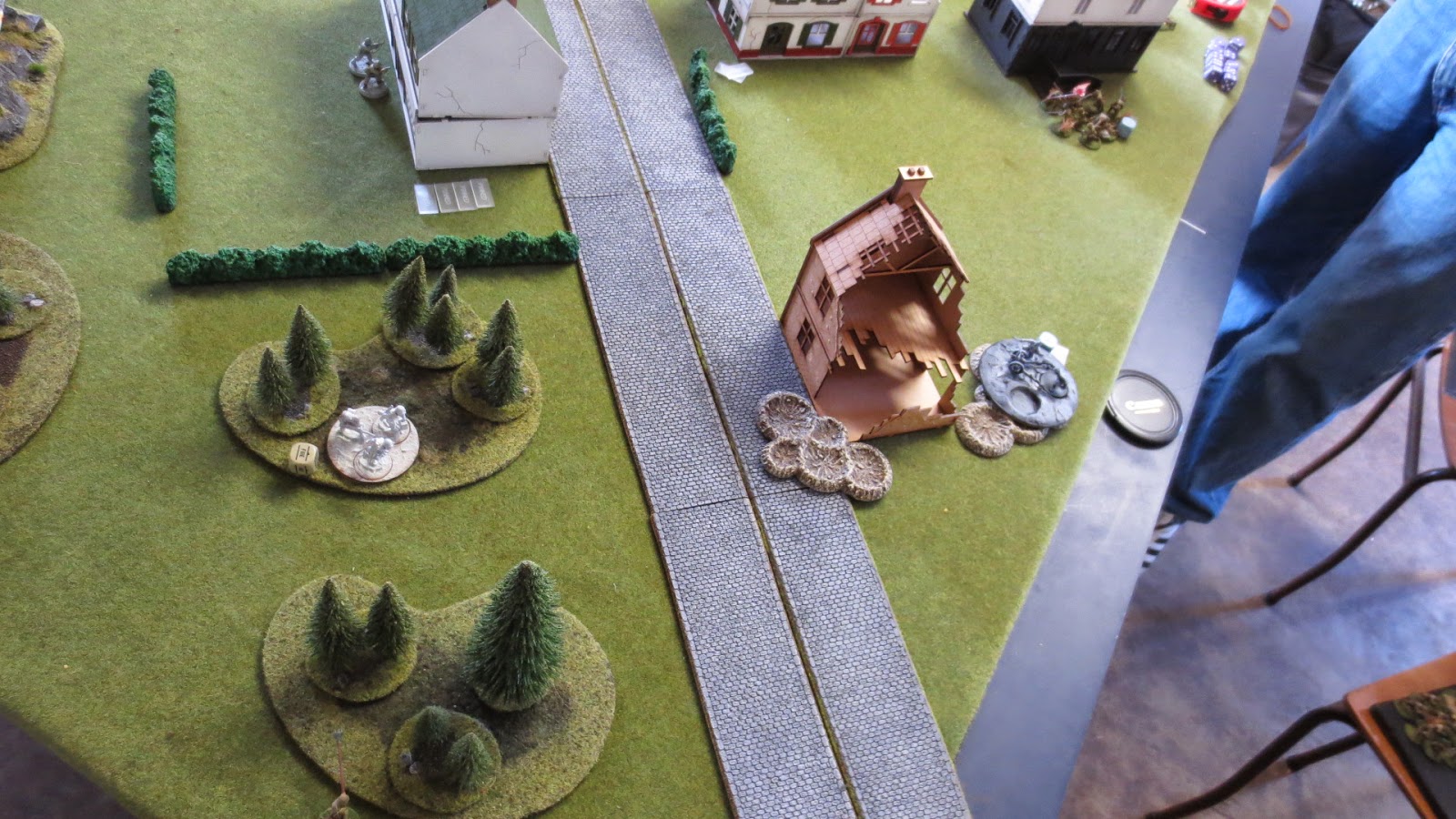 Next up was my surviving MMG team—the one on the western flank having been toasted by a sneaky flamer earlier this turn, said flamer promptly running out of fuel and running for the hills. The MMG on the eastern flank made up for the loss of its partner by plowing through a light howitzer that had the audacity to try shooting at it, killing one of the crew behind the gun shield. 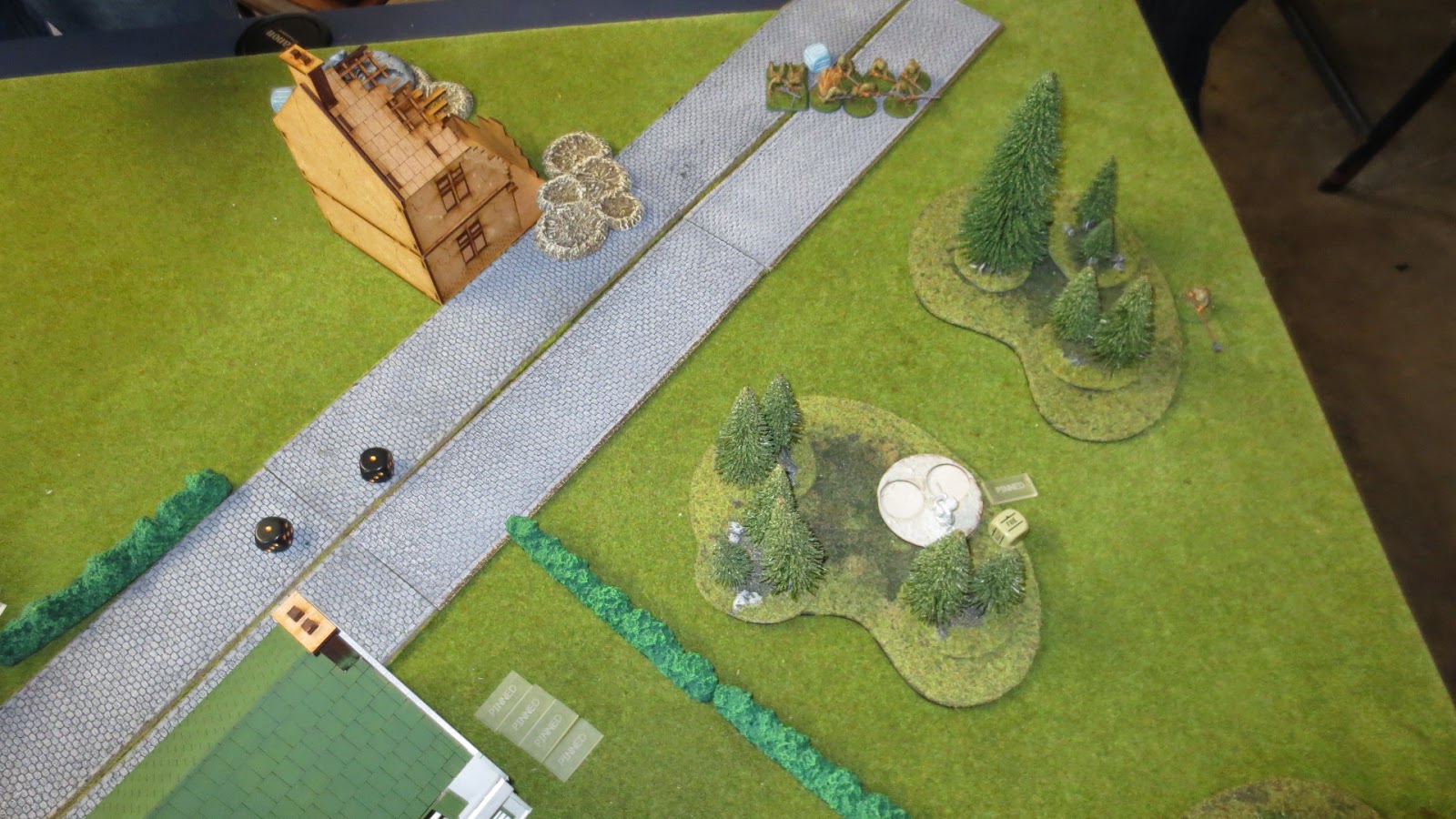 For this, however, the MMG team paid the price, another IJA veteran squad entering the board in the northeast, spraying the team with small arms fire, cutting down two of them. The gunner, finger on the trigger, cares not for such trifles as dying because of bullets, and holds on for grim death. 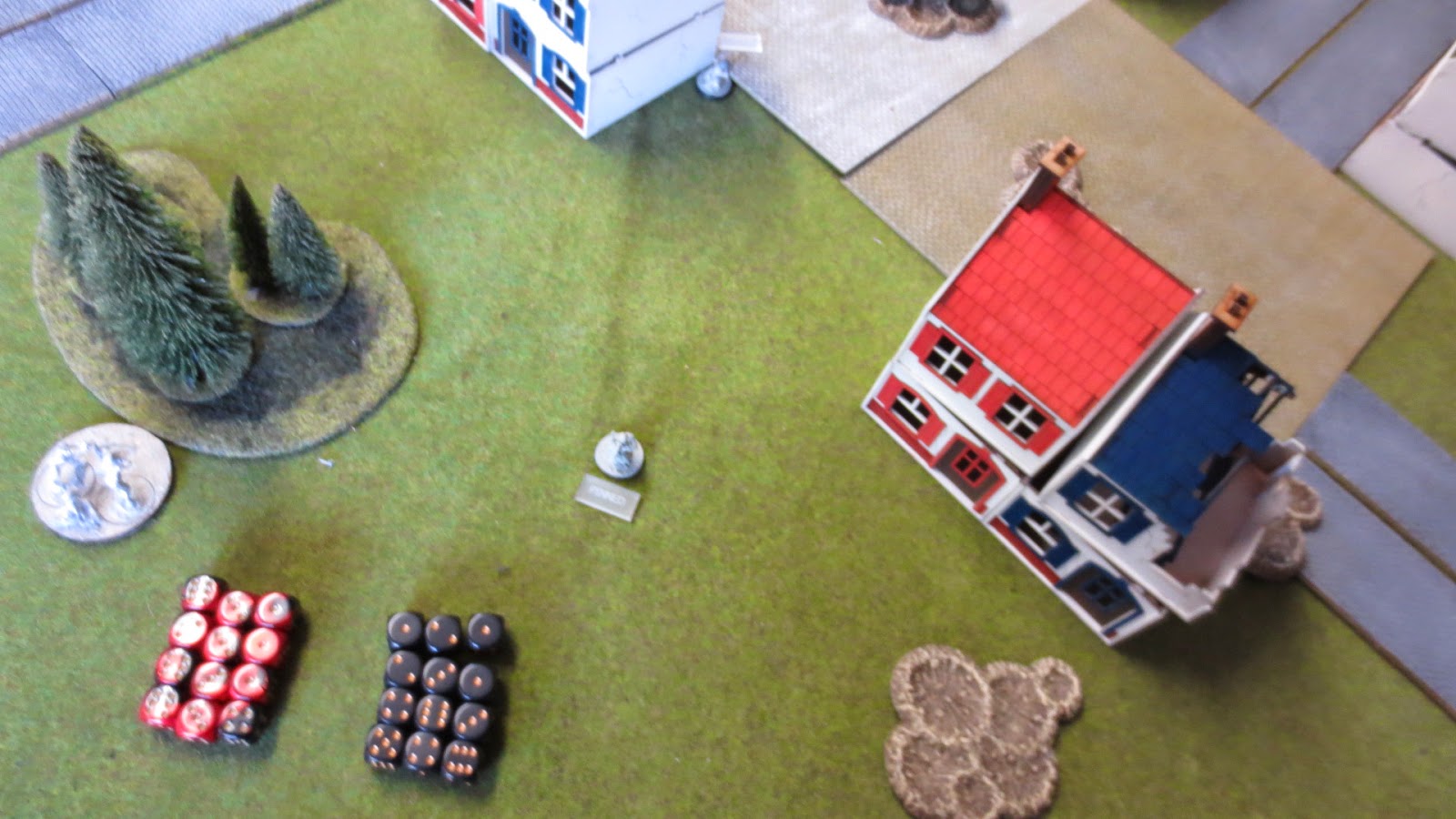 Sometime during the third turn my FAO, having repositioned in turn two, vectors in a second strike against Rob's IJA grenadiers, then takes heavy fire from the veterans in the objective building, losing his radioman to the fire, but remaining steady awaiting the sound of nearby aircraft engines. 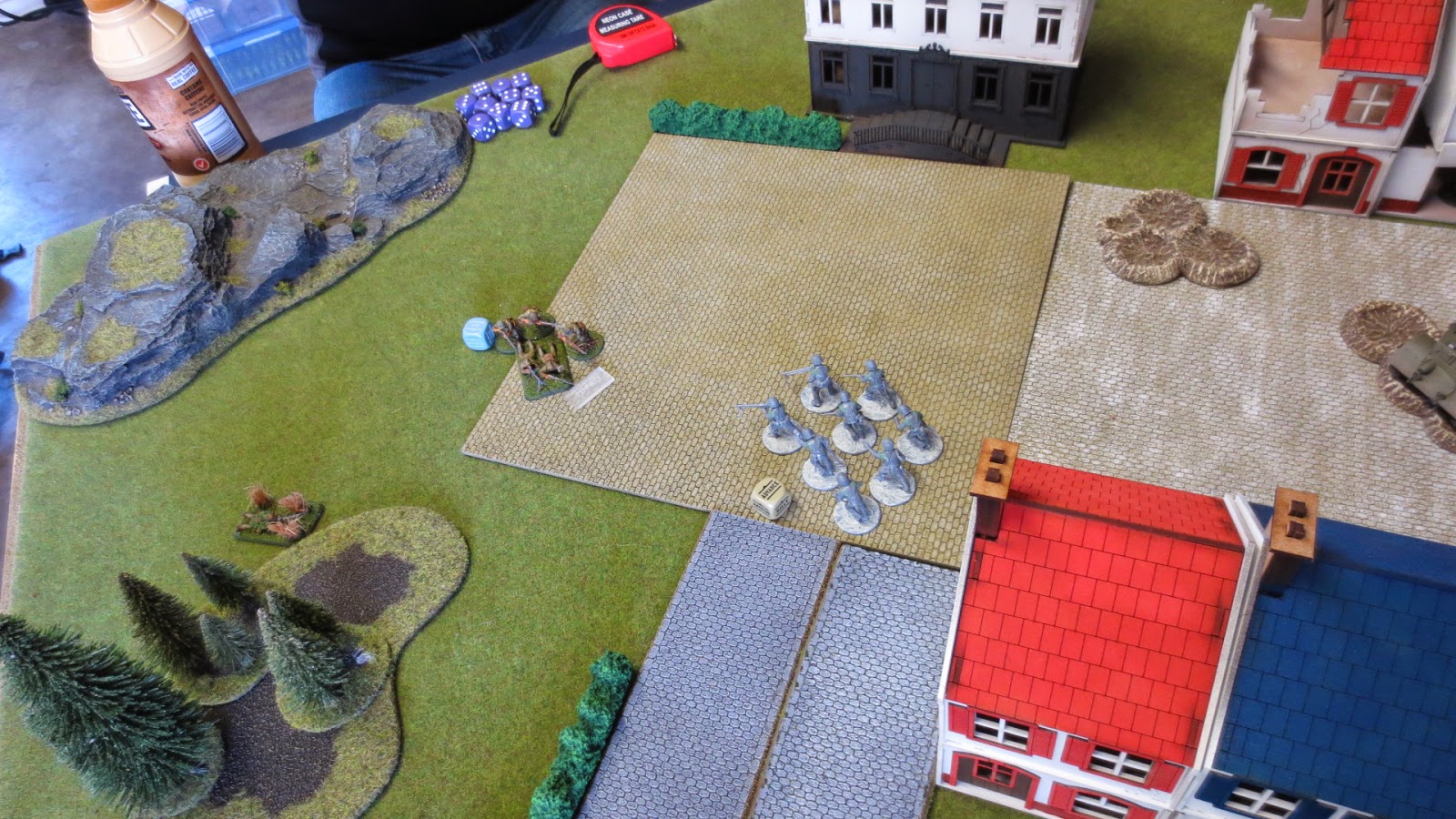 Turn 4 opened with a bit of a strange move from Rob, placing his IJA vets in the open. So my squad of Marines advances from the building, putting up a murderous curtain of fire, killing five of the team, not quite enough to force a morale test. 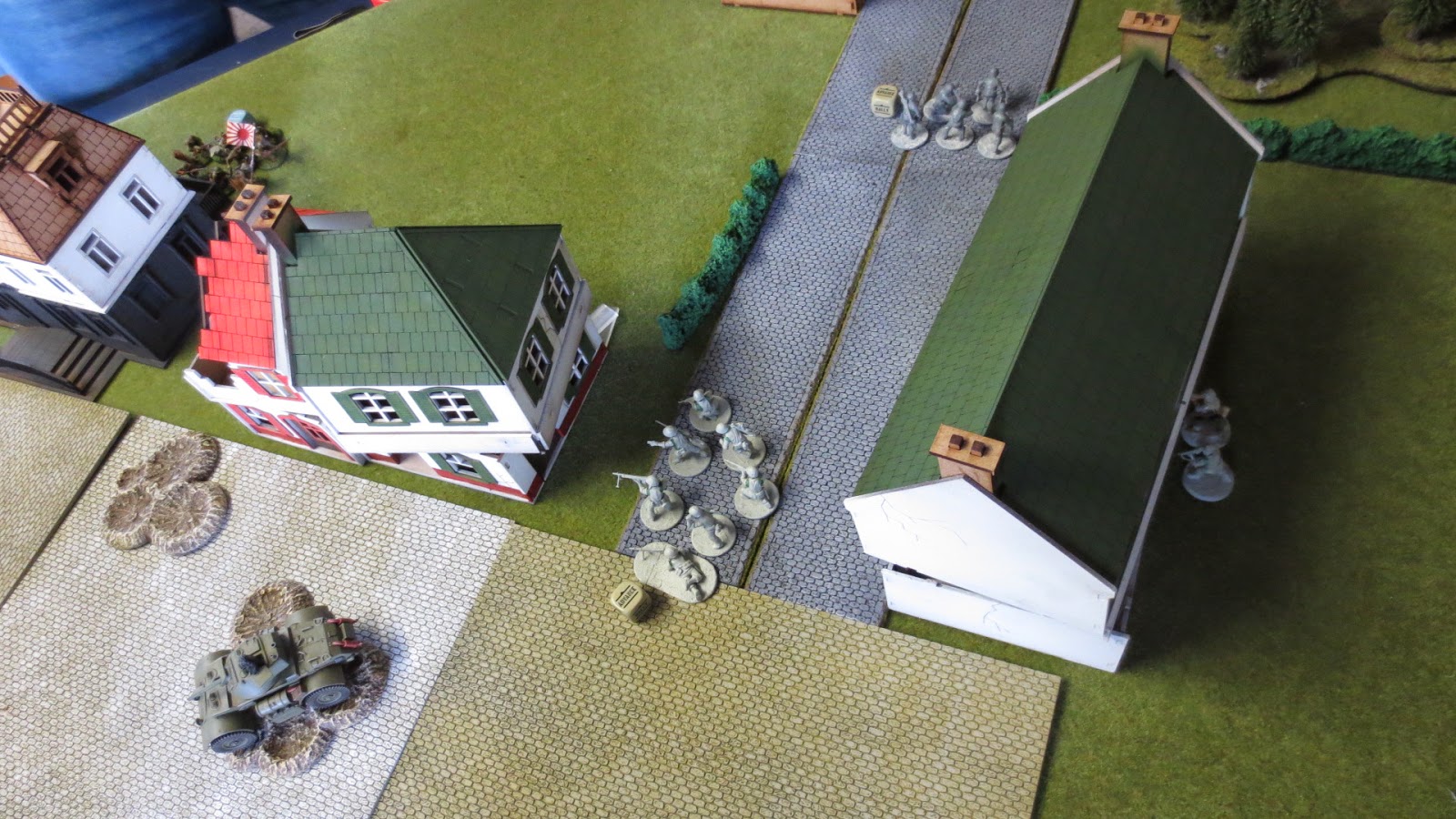 Following their compatriots lead, another Marine squad rushes from their building, pouring point-blank fire in through the windows of the building the other IJA vets are sheltering in. This causes no casualties, but puts down another pin marker on the vets. 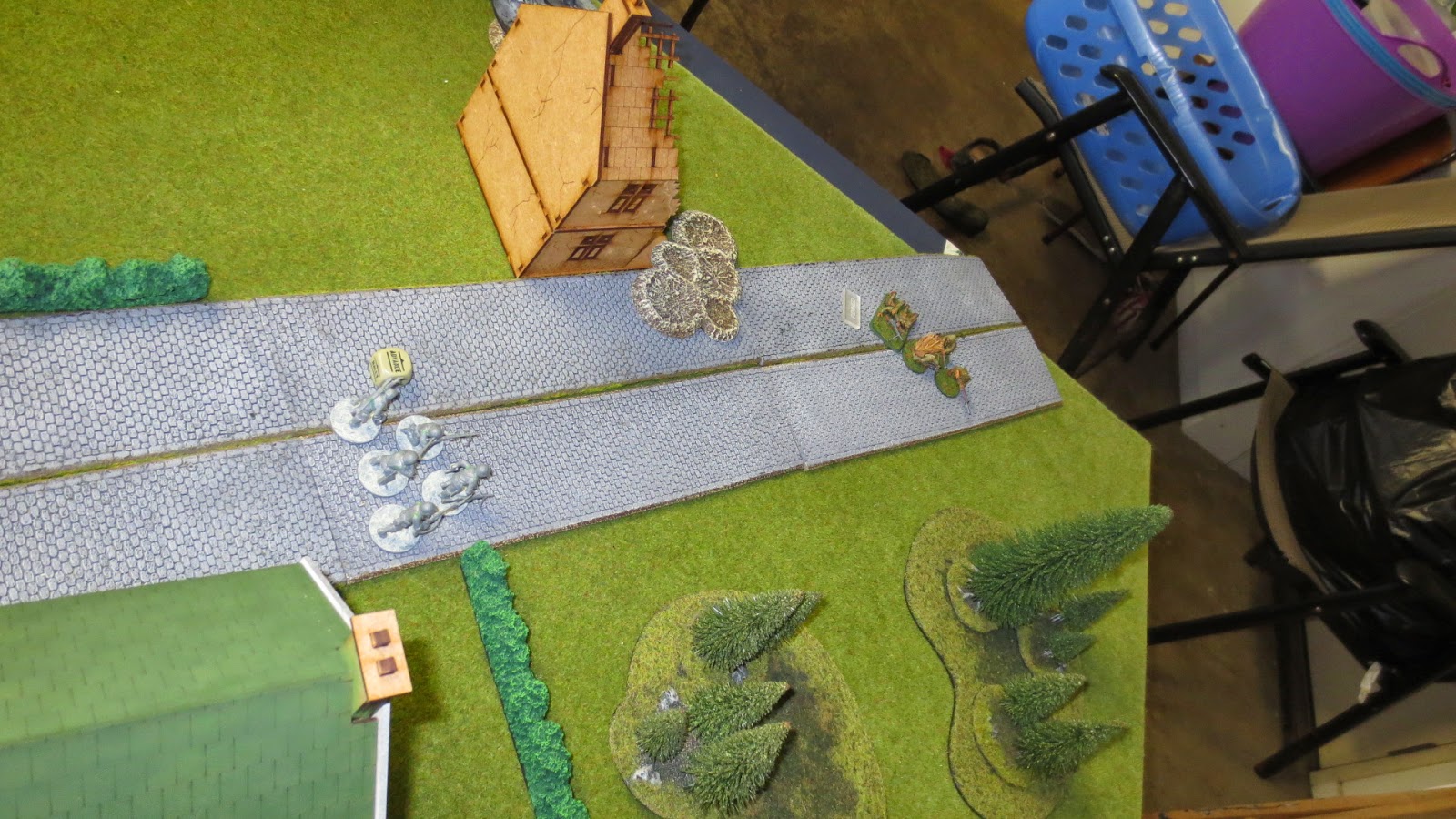 The north team from that same building, having rallied last turn, also advances, opening up on the IJA that killed the gunners—the last man having been taken out by a kamikaze nutjob with an plunge mine on a stick. The depleted Marine squad, having suffered two turns of shelling from the grenadiers, take out their irritation on the IJA in spectacular fashion, killing half the squad. 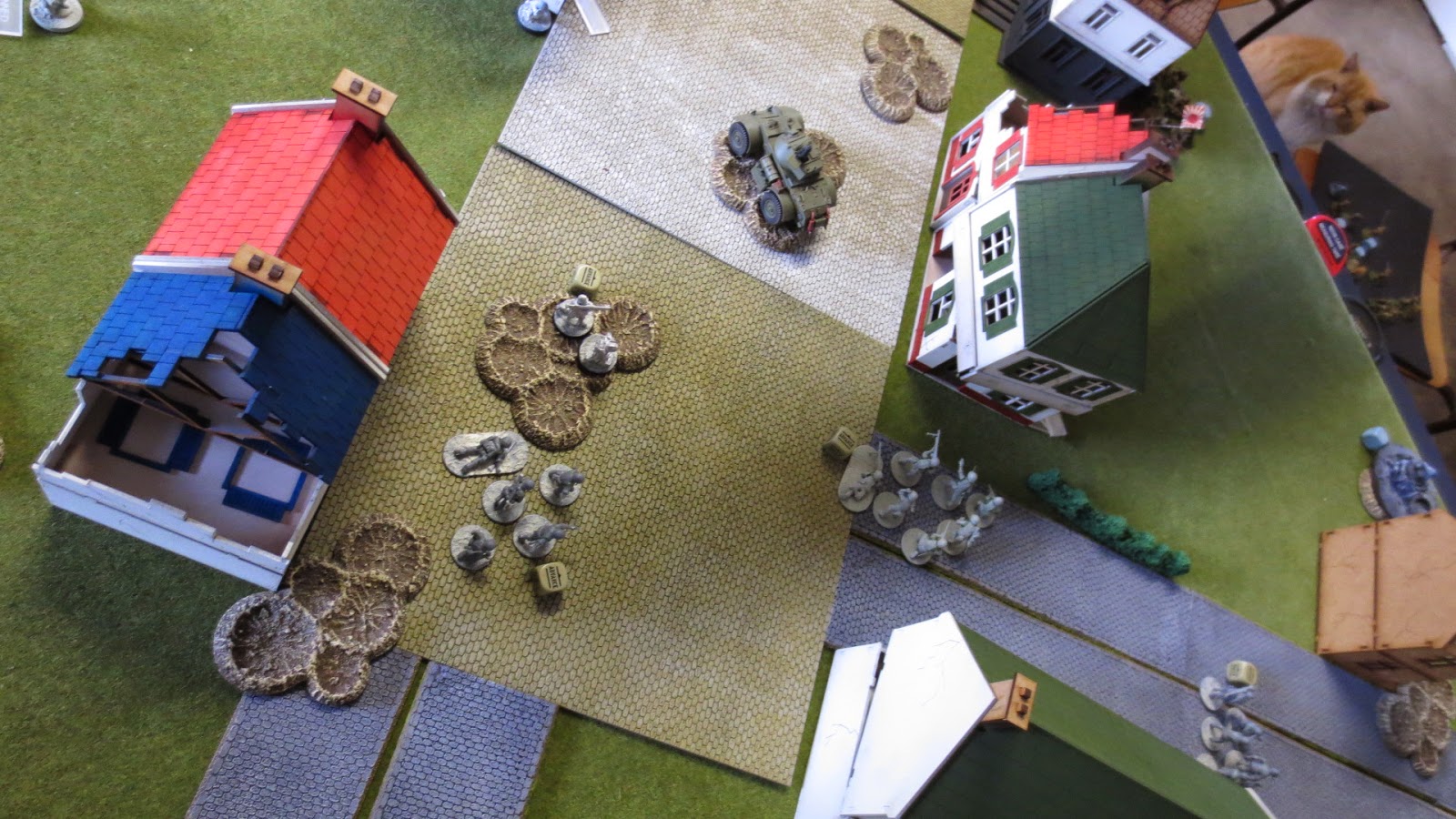 Then, in the centre, I decide it's time for an objective run. Only two turns left, with the possibility of one more. Balls to the wall as everything advances on the IJA vets sheltering in that central building.

AT squad, with their tommy gun sergeant, they get some hits, but no casualties. Bazooka, predictably, fails to hit the broad side of a barn. Of course, there may be rather less barn at this point. 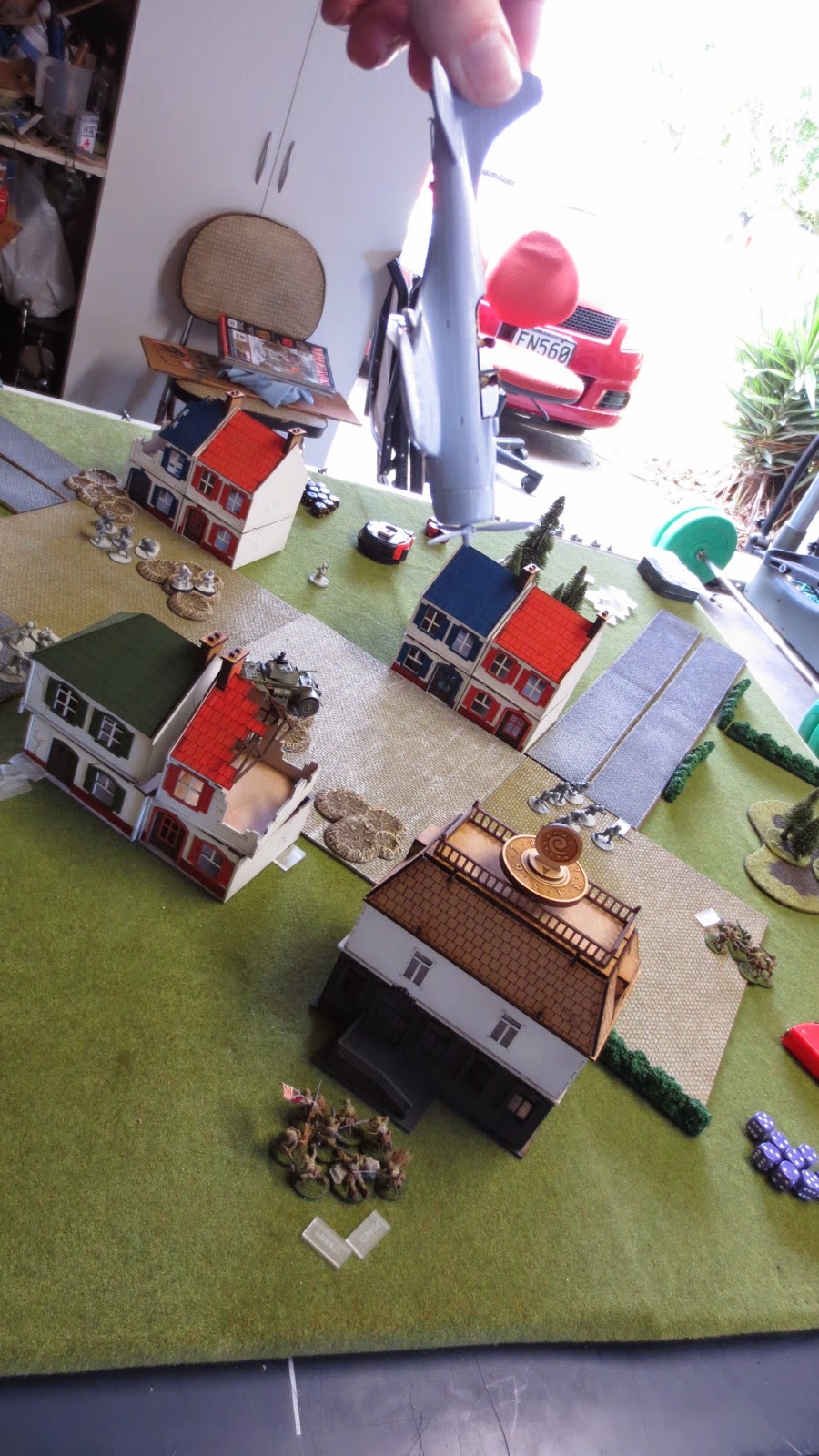 Then, in a fit of pique, I fire the mortar at the IJA vets…KABOOM! Straight through the building, falling through the large hole the MMG team left while busy exploding, the heavy round detonating amidst the veteran Japanese troopers, killing a terrifying six of them in one blow. Yes, yes, I think I'll keep this little monster.

Little else of real note happens, some maneuvering here and there, and pot shots all round, but the dust settles on turn 4, my airstrike having been delayed at the start… and leaving me hoping I didn't roll a 1—letting Rob take control of it—at the start of turn 5.

I rolled an amazing string of numbers for the airstrike, pinning down everything near the target, calling in a heavy ground attack aircraft (my SBD Dauntless here) that released its payload and obliterated the grenadier squad where they stood. When the dust settled there was only a large crater and small bits of tattered uniform lying around it. 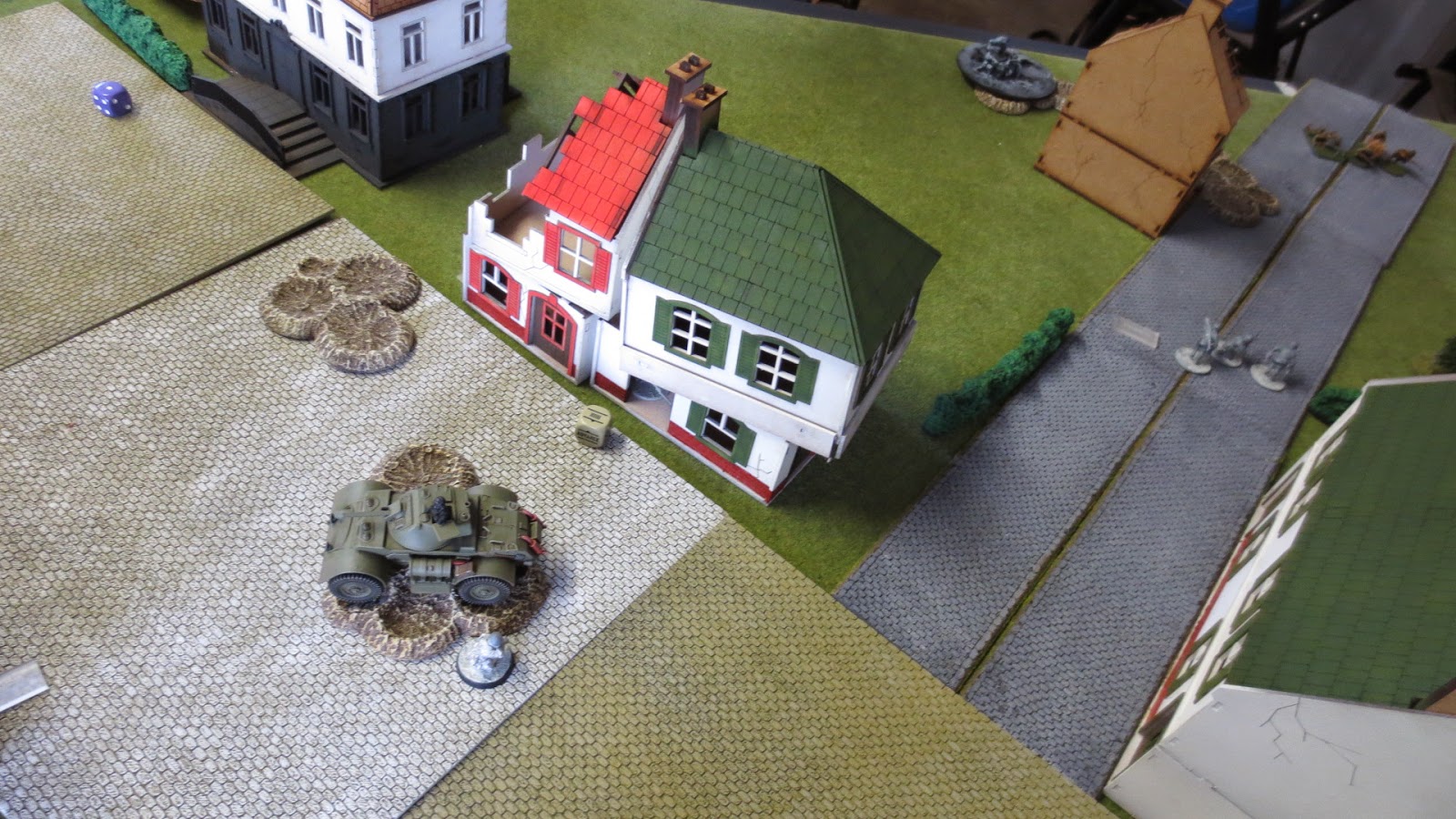 Following that, my Marines assault Rob's final two IJA vets, and a after a brief, bloody, fight, emerged victorious, claiming the objective. Rob ceded the game at this point, realizing he had nothing that could reach the objective in time—and survive the onslaught of USMC fire long enough to hold it.

US Victory!
Posted by Ravager Zero at 01:48 No comments: