Yes, I know it's a week late. I did actually get stuff done last week, just didn't take any pictures. Until now. 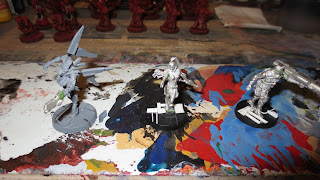 So, this is this week's project: Infinity reinforcements. At left is a Garuda (old HMG sculpt) converted to a Spitfire armed model. Centre is a Naga sniper. Had the model for the longest time, never used her much. On the right is an Agema with missile launcher.

The Agema uses a Dactyl body, and a missile launcher kindly 'donated' from a Yan Huo. 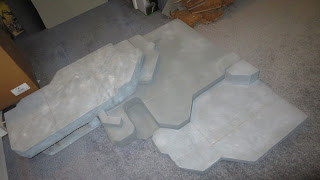 And this is last week's project: Painting the elevations. Base coats, and a little shading at least. 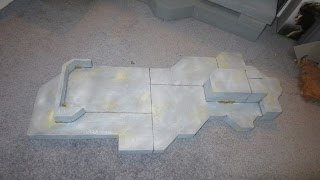 This is the last elevation, and the closest to complete. Still feels like it's missing a little something, but I can't quite put my finger on it.
Posted by Ravager Zero at 03:17 No comments:

So, late Saturday night, and I've only just finished the additional troops for an alternate list for my Infinity army. The tourney is tomorrow. Nothing like a deadline to get one motivated. 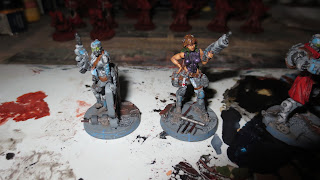 Finished Mk. 5 Proxy on the left. Pretty pleased with how the SMG's (cut down MSR's) and slings (greenstuff bands) painted up.

On the right is the Dactyl doctor, with Combi and ADHL—because nothing's more fun than gluing your opponent's best model to the floor for the rest of the game. 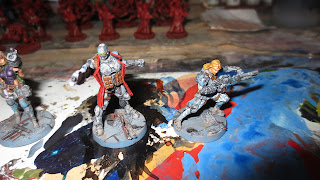 On the left is the finished Authorized Bounty Hunter, his red jacket is meant to tie him in with my fleet officer HVT (Red blouse & cap), while his camo ties him in with the rest of the army.

The Feuerkitai painted up exceptionally well. Thrasymedes (the base model) is an excellent sculpt, and the old Azra'il arms work pretty much perfectly. The only disappointment was that it would have been next to impossible to re-pose the head. 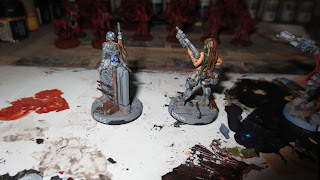 The girls from behind. Yes, I've gone so far as to name all of my models. Infinity is a small model count game, after all, so you can really go to town.

The Dactyl has green streaks in her hair to tie her stylistically to my Sophotect, who has grey skunk stripes in her hair. 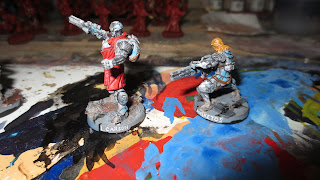 Once again, going nuts with names. This angle also better shows off the ABH's jacket and gun—which is a spare ALEPH Spitfire, with a spare MSR scope on top.
Posted by Ravager Zero at 03:33 No comments: