So, it's been a while since my last post. A long while. In that time a lot has happened. Most importantly for the blog, I've completed painting another faction for Cthulhu Wars. In this case, Opener of the Way. 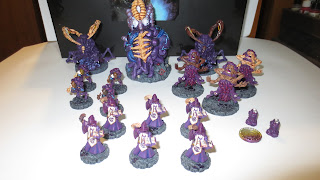 This is the entire faction. The standard six cultists, plus assorted monsters, and of course a Great Old One. 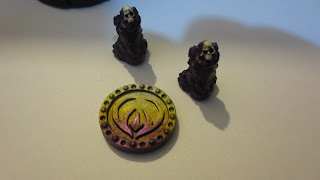 Only a little thing, but the power and Doom markers are important. In this case, for the Doom marker (the coin) I've gone for a heat discoloured metal look. I chose Titanium to model it off (instead of another metal) because Titanium has an interesting oxide gradient, from straw, to brown, to purple, then on to white. For the obvious reason I stopped at purple. The colours were achieved using a combination of washes and Vallejo transparent colours. 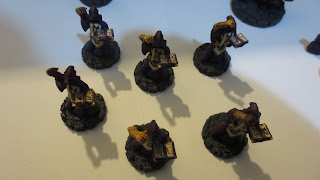 The cultists, and once again I've given everyone a different spellbook, and have tried to paint the Opener symbol on everyone's robes. Not too clear in these pictures, unfortunately. 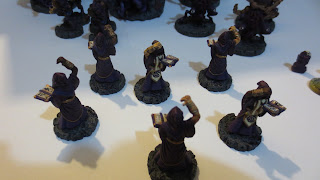 Another shot of the cultists. Of note is the variation in skin tones. As Opener can start anywhere, I decided their cultists should be a multi-cultural bunch, including light, dark, middle eastern, and Asian skin tones. 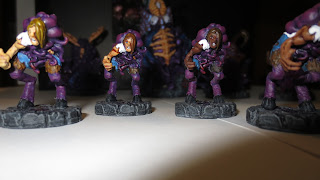 The mutants. These are the basic monsters, and I've tried to do them justice by combining techniques used on both the cultists (skin tones) and other monsters (tentacle shading).

Opener's units are special in that once a particular spellbook is acquired, they can upgrade through successive forms, culminating in the Spawn of Yog-Sothoth. 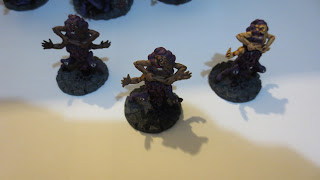 These guys are the Abominations. This is what mutants turn into when they survive a battle with the aforementioned spellbook. They're also pretty good in combat, and contribute to another spellbook that lets you rain hellfire upon any location on the map. 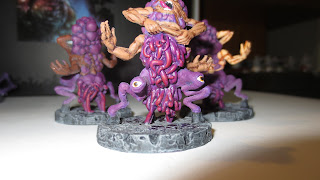 Another picture, highlighting the tentacle shading, and other wrongness—like extra eyes where no eyes should ever be. 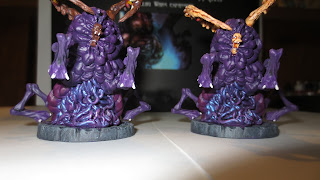 The Spawn of Yog-Sothoth. These guys were interesting to paint, being mostly smooth surfaces on one side, and convoluted masses on the other. The tentacles were shaded as for the Abominations above, and then given a light coat of iridescent blue. Said light coat turned out to be stronger than expected, but I like the effect. 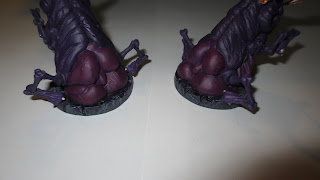 These are the backs of the Spawns. Simple shading on the purple, combined with a tar/slime trail on the bases made from 1:1:2 vallejo transparent blue:transparent red:water effect. These are some of the strongest combat monsters in the game, and costly because of it. When upgrading—if they choose to—they instead explode into as many mutants as you have available, allowing the upgrade chain to begin again. 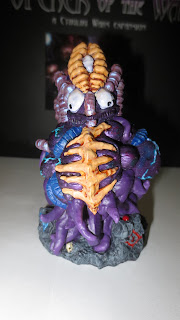 And here we have the great gribbly himself (itself?): Yog-Sothoth, the key and the guardian of the gate. He's unique in game terms in that he also counts as a gate, allowing monsters to be summoned through him, meaning a bodyguard is never far away. He can also move gates (friendly or enemy), along with Abominations and Spawns, allowing Opener to completely restructure the map if he wants to. 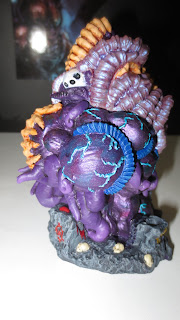 Another view, showing off the 'universe orbs' Yog-Sothoth is composed of. It took several stages to paint each orb, starting with rich purple, then using a drybrush to flick white paint on to create stars, then washes for nebulae, followed by a thin coat of vallejo candy black, and another thin coat of iridescent purple.

The veins were the old GW Hawk Turquoise, highlighted with vallejo off-white, rather than straight white. 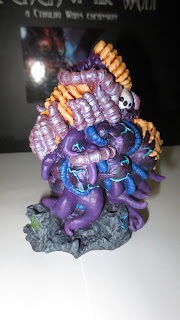 The upper tentacles (blue-silver/red) were painted with a basecoat of medium grey, then a wash of GW red ink, then liberally coated in iridescent blue to give a shifting purple/pink appearance. The fleshy bits were painted to look as unnatural as possible—for why should something so large and strange have human flesh anywhere? The flesh is also to tie into the flesh colours of the other monsters in the faction, which were at one point quite disturbingly human. 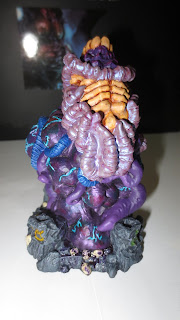 The base is painted to resemble dark granite, inspired by the mention of the rocky hills in Lovecraft's "The Dunwich Horror". This was done with a very dark grey base, drybrushed with GW Adeptus Battlegrey, followed by Army Painter Uniform Grey as an even lighter drybrush.

The glowing symbols were done using simple OSL techniques, starting with a thinner than usual paint, then highlighting only the centre of each symbol. The 'tar' effect is the same as was mentioned for the Spawns.

And now, for those that stayed that long, the next item on my list: Sleeper 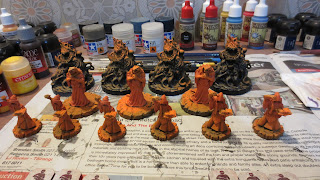 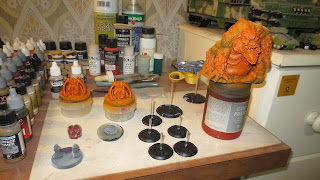 Posted by Ravager Zero at 23:11 No comments: