So, we had a big bash on Sunday with as many X-Wing models as possible, including the Tantive IV and 2 Rebel Transports. Will served as the referee and designed the mission, though I shall blame the Imperial loss on Rob's dubious accounting rather than all or nothing mission design.

There are a lot of pictures, and not a lot of commentary. Mid-late game lots of stuff started colliding, and transports started running things over, and there was much exploding of Imperial ships. But until the very end of the game we led by 10-3, and only lost because we failed to inflict 1 final damage point on the Tantive's rear section.

Sure it survived the battle, but the Rebel scum should be worried about hitting the debris of all those TIE fighters. One wrong move and the whole ship's gone. Anyway, pictures. 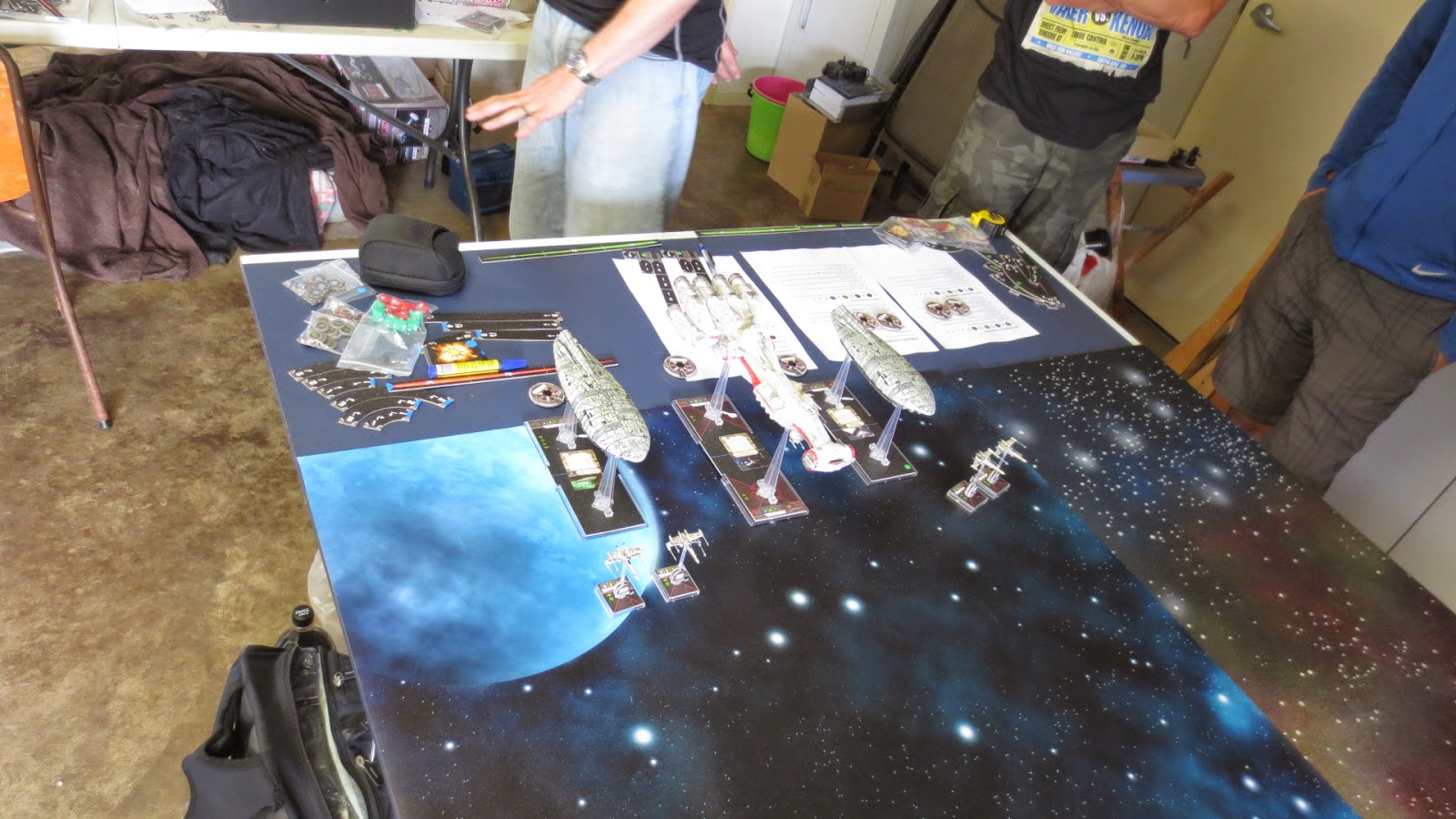 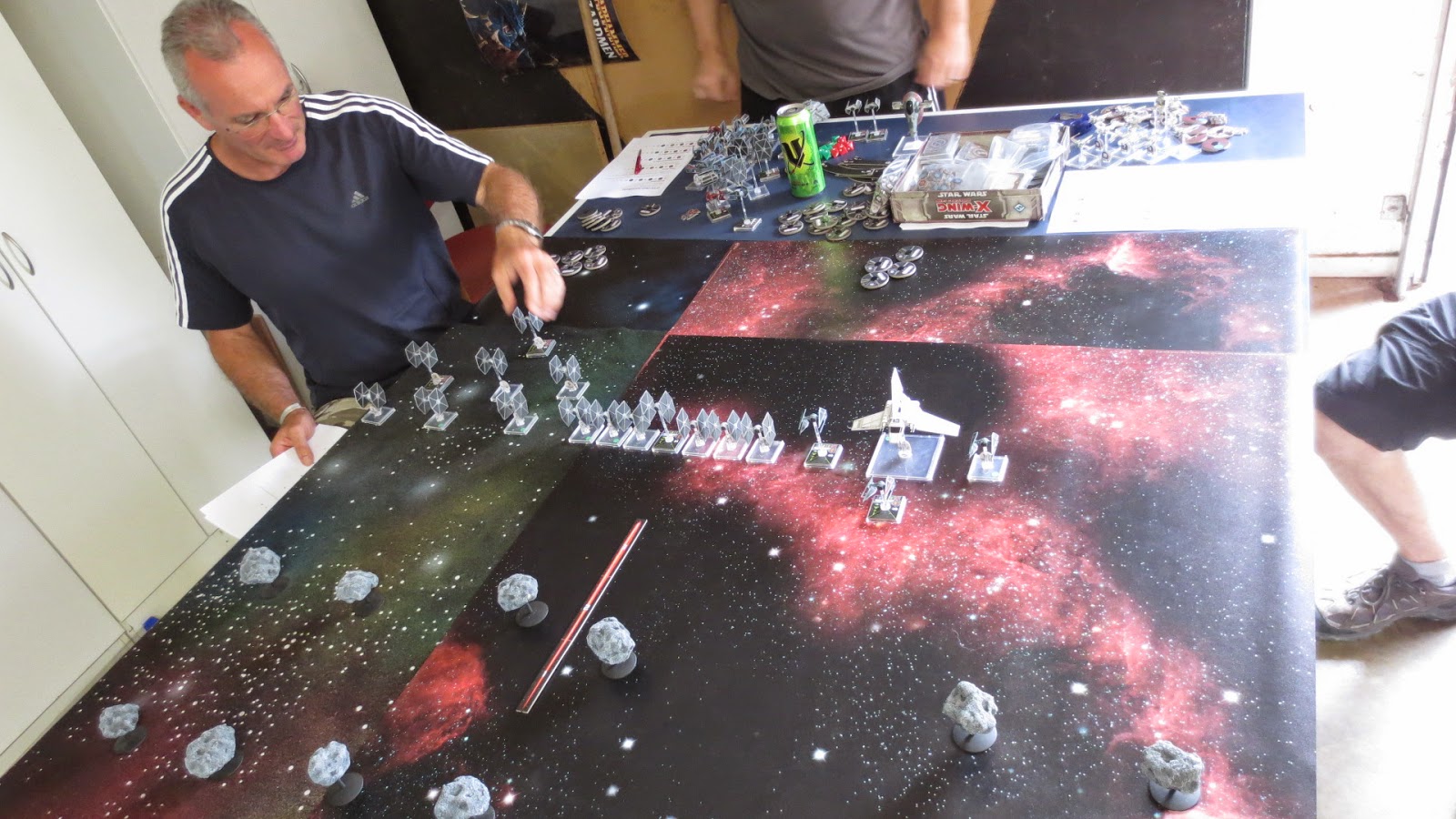 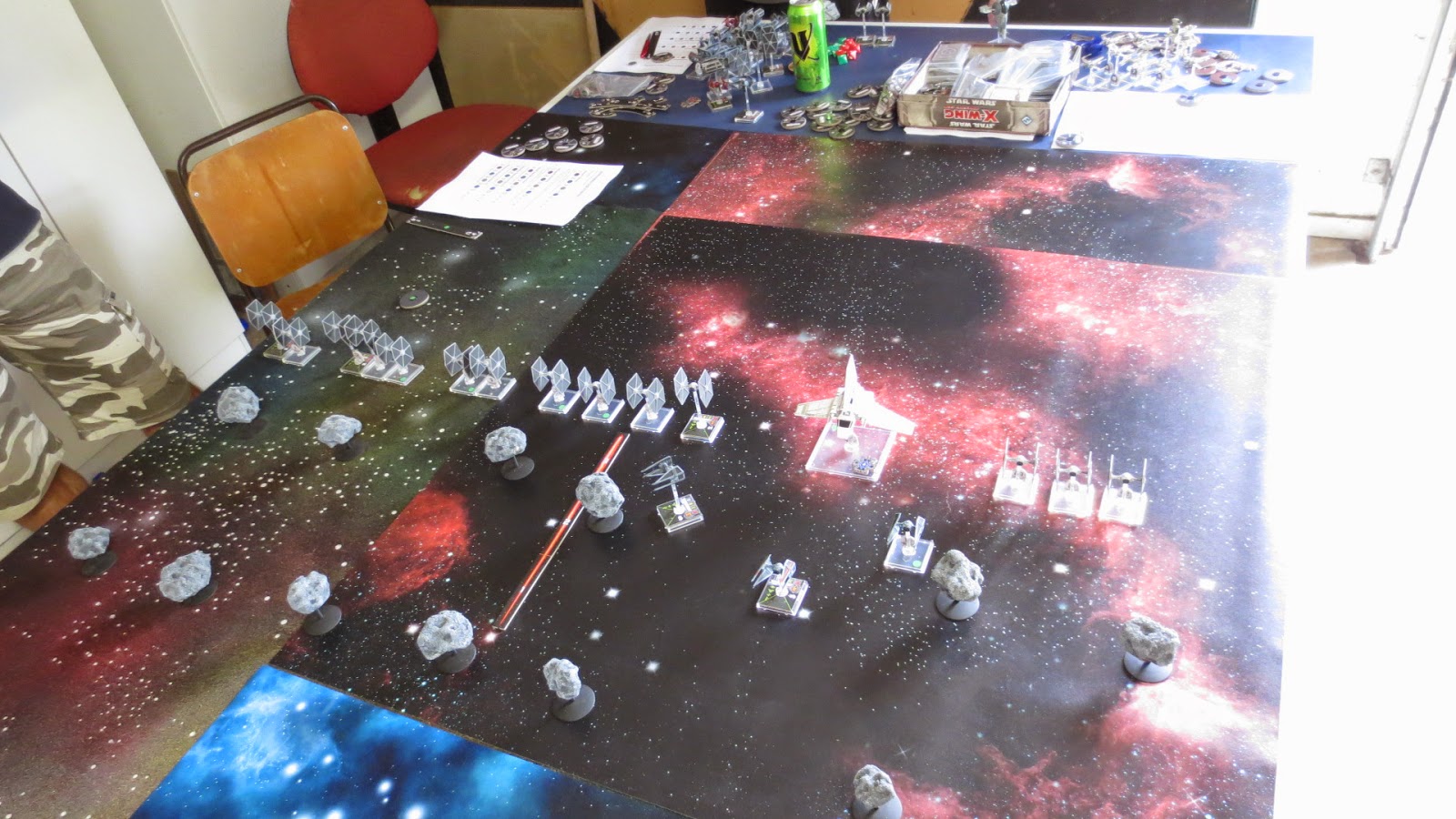 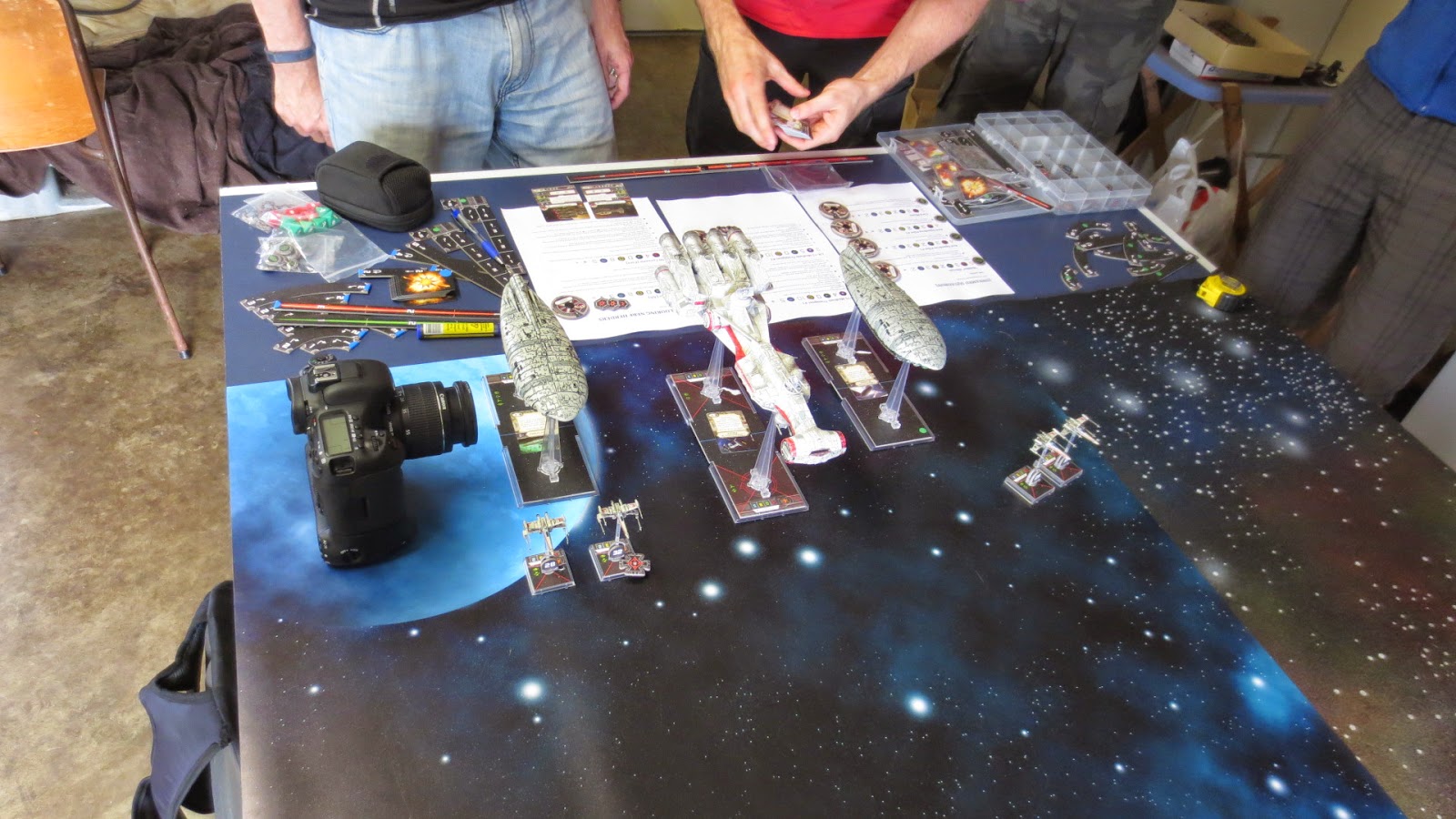 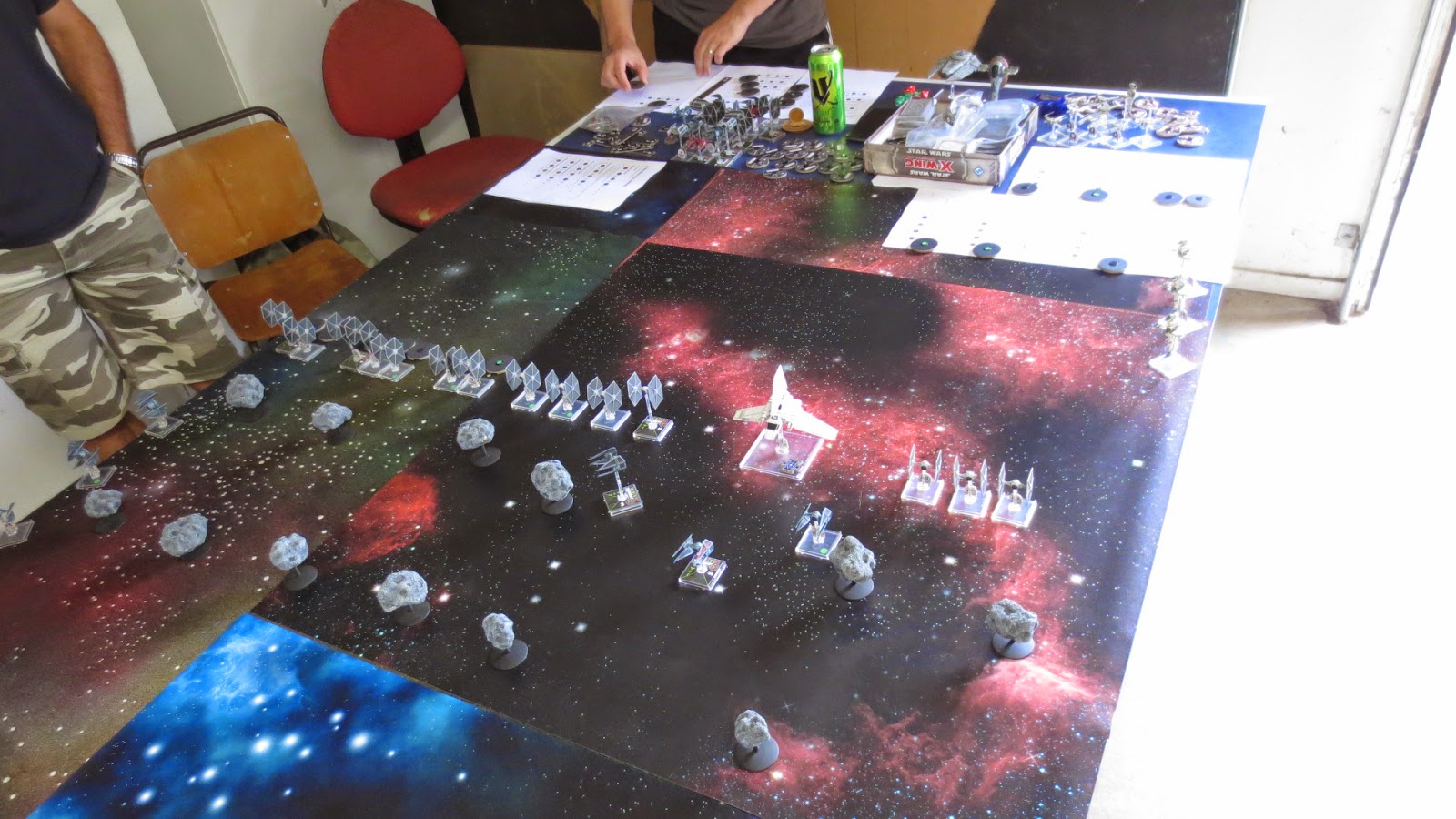 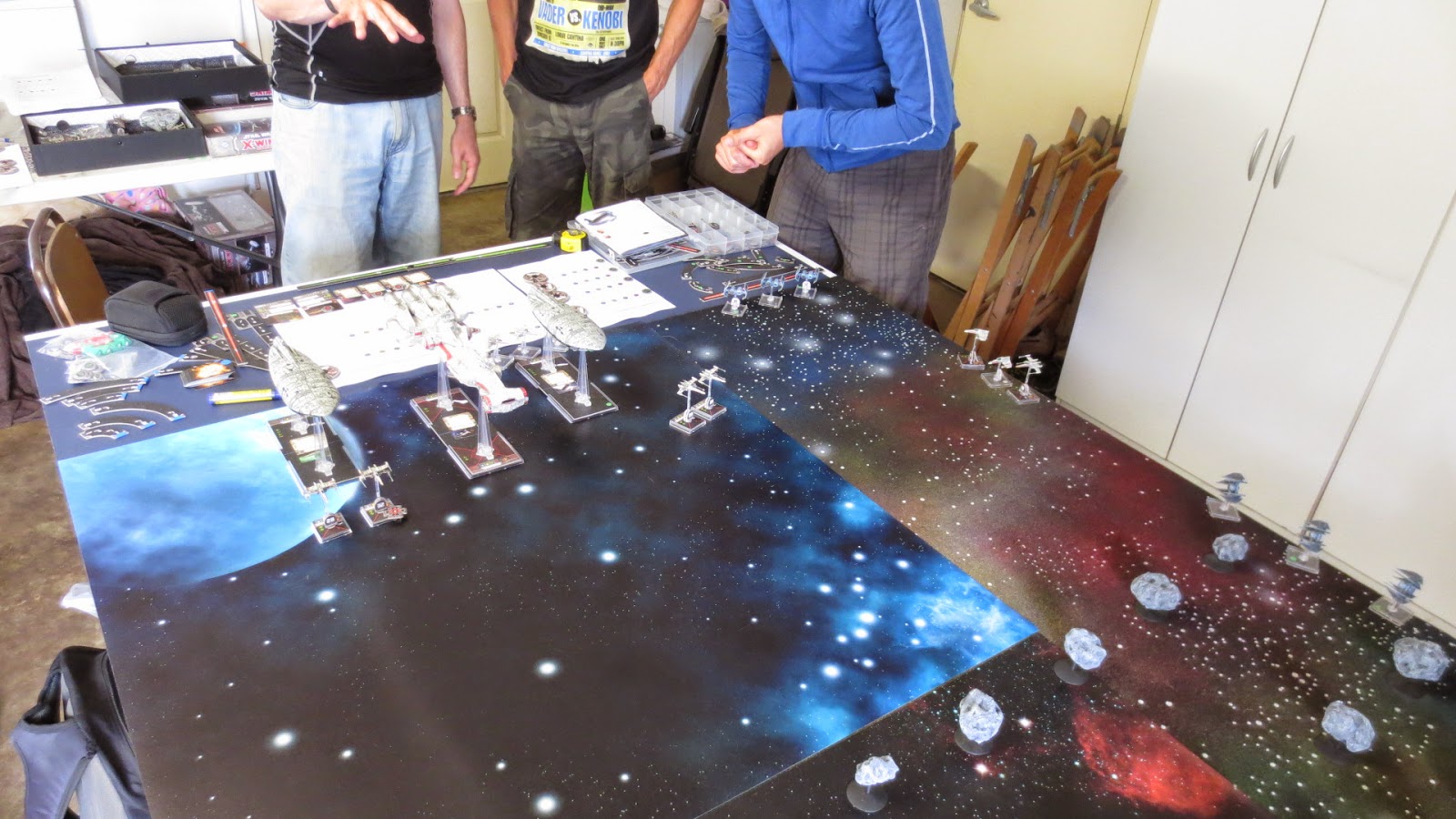 Bombers take the flank, lining up on the far transport. E-Wings outflank the bombers, and are in turn bounced by TIE Defenders. 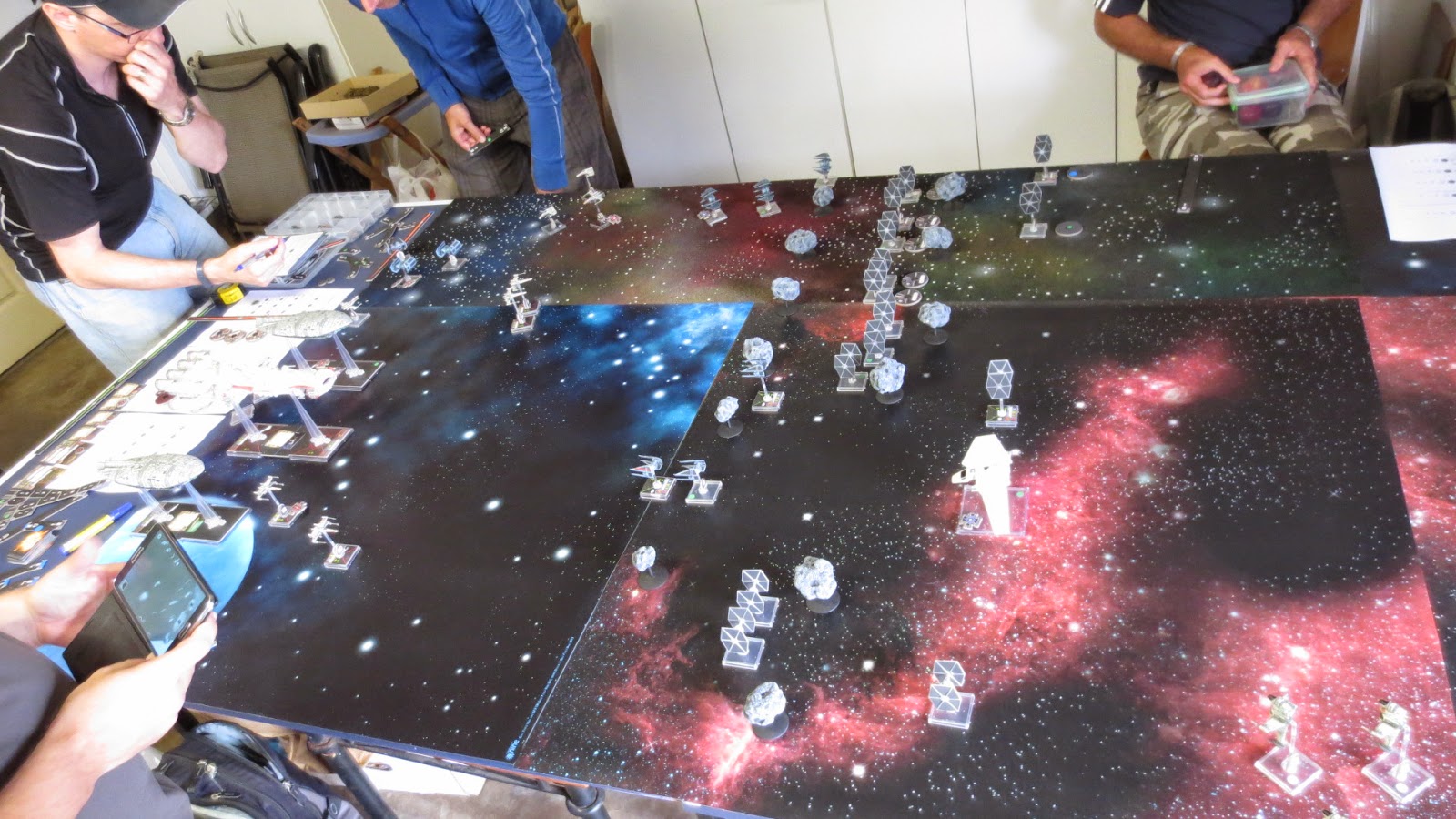 Things start to get tangled as the Bombers line up on the big ship. 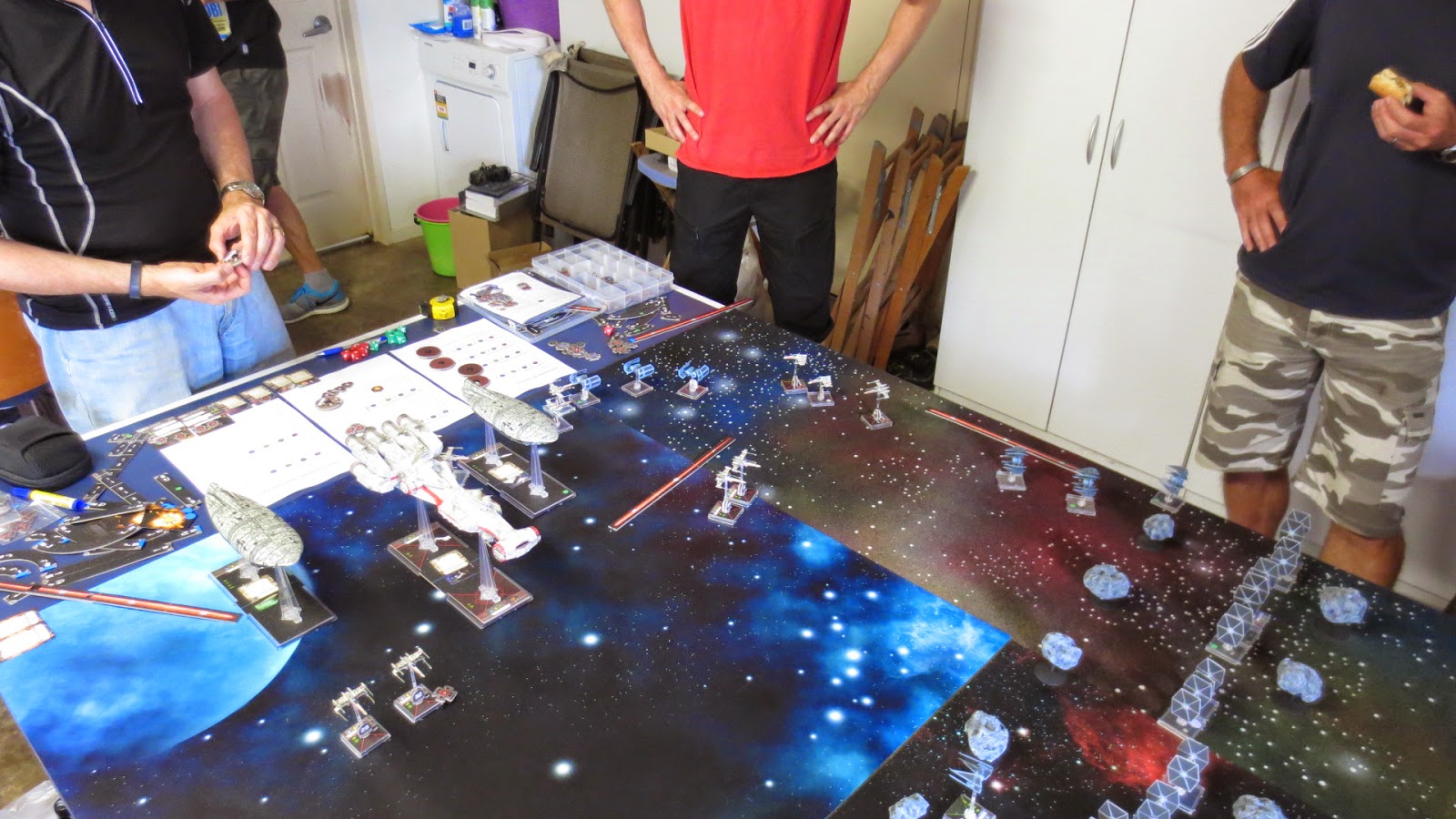 Despite heavy fire from the Rebels, the bombers deliver their payload. 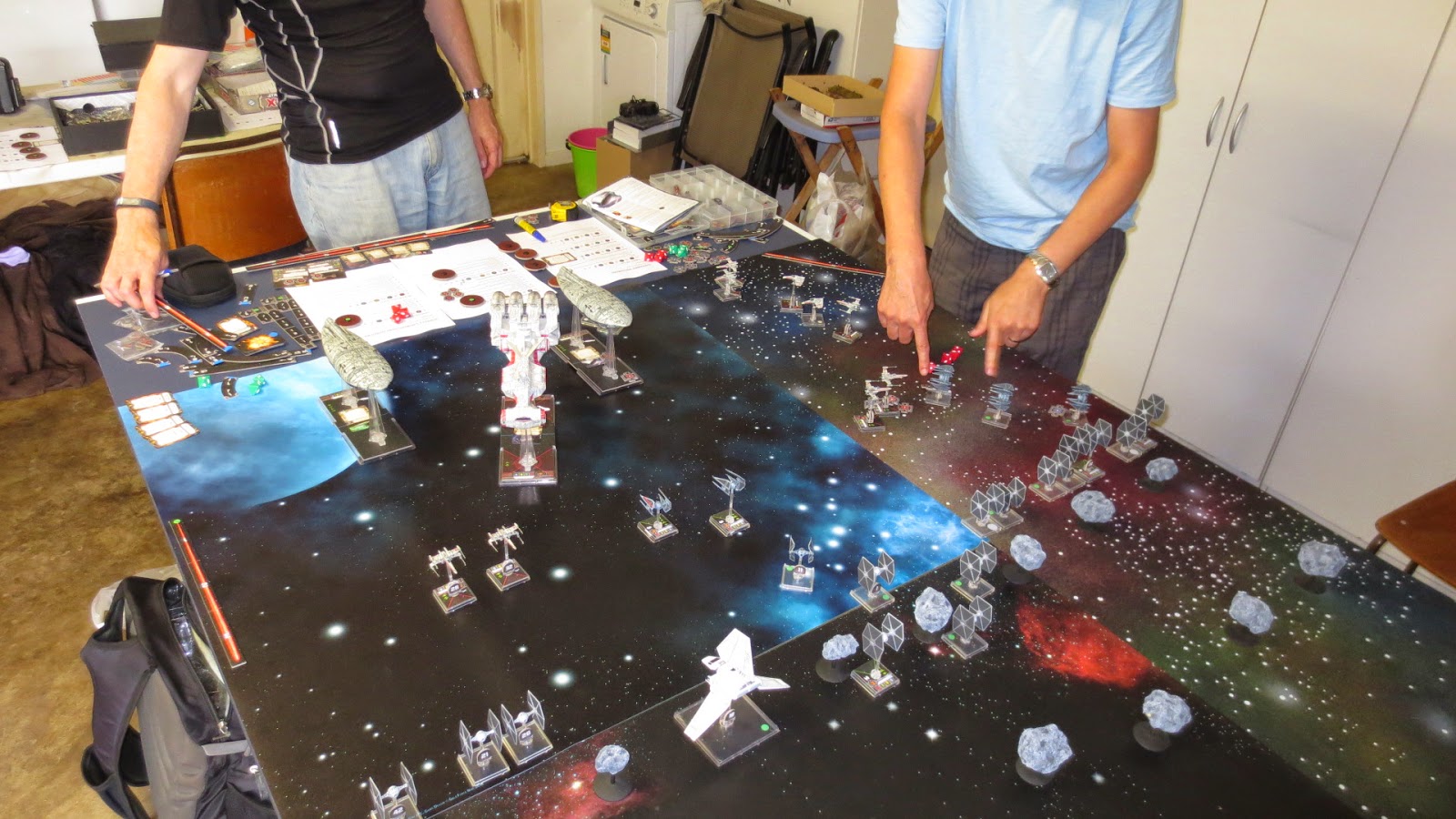 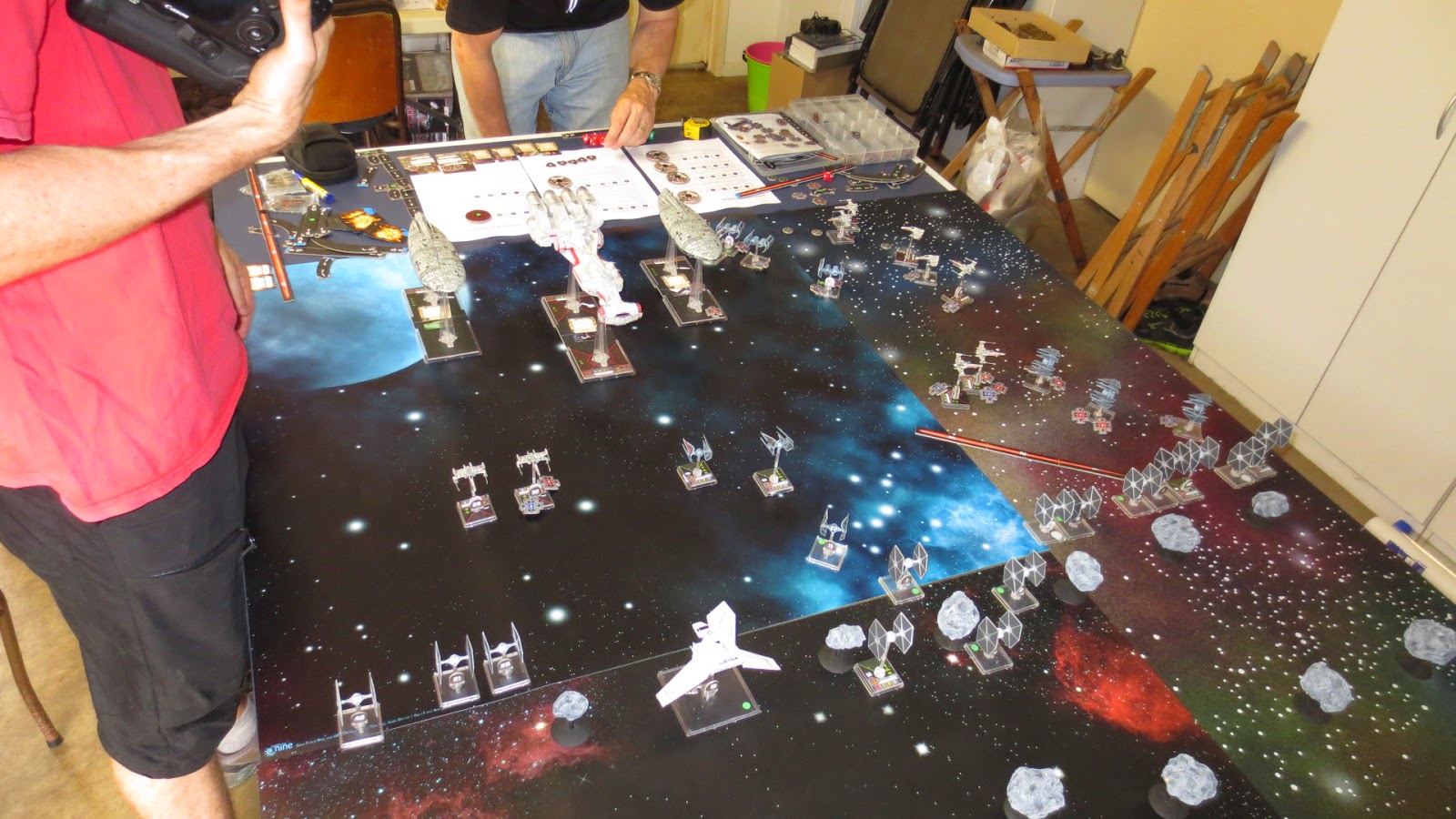 A massive furball erupts on the right flank as the TIE Fighters break through the asteroids, helping the Defenders and Bombers.


The Bombers are nearly dead, but have flushed ordnance, nearly crippling the big ship. 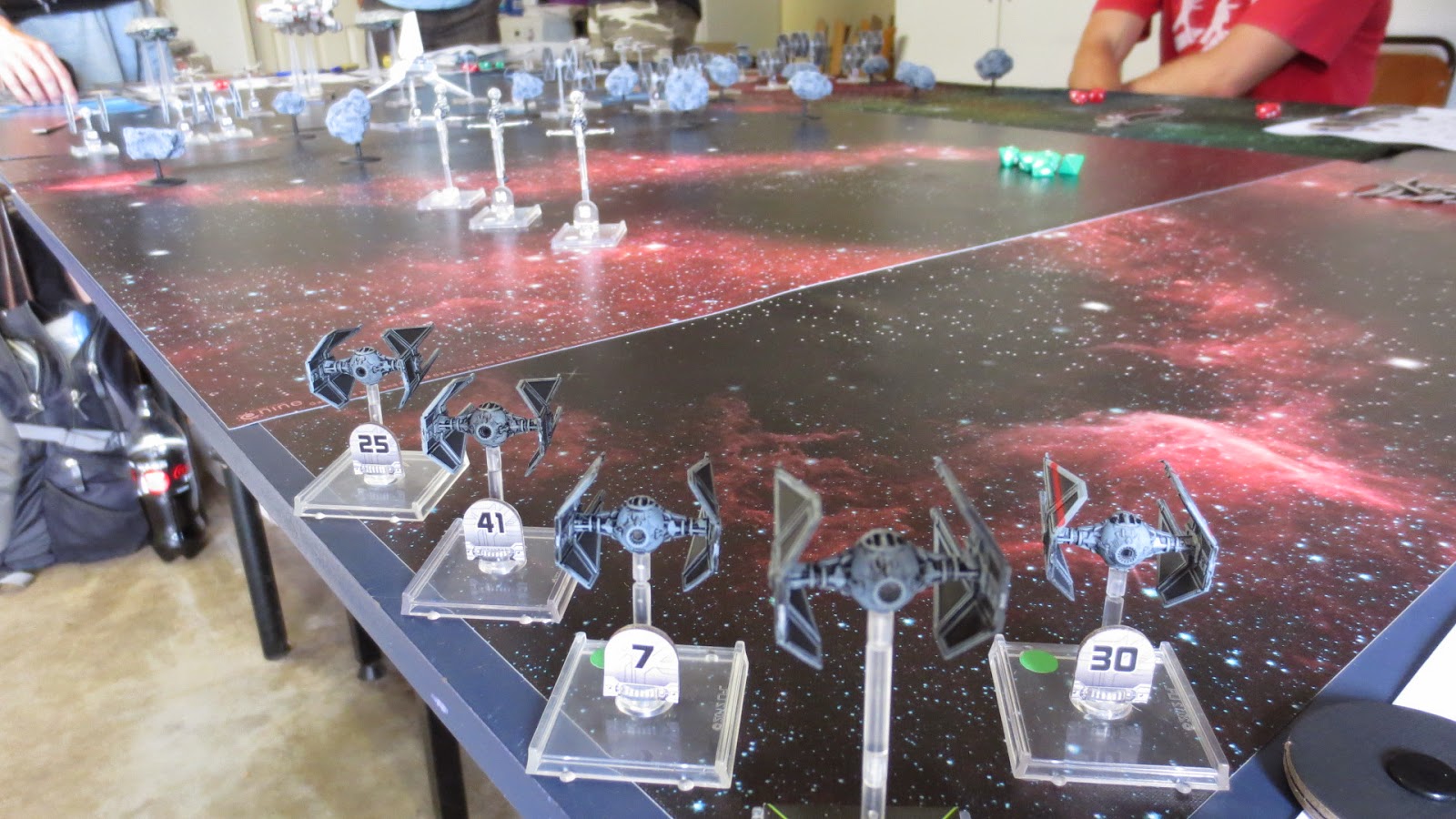 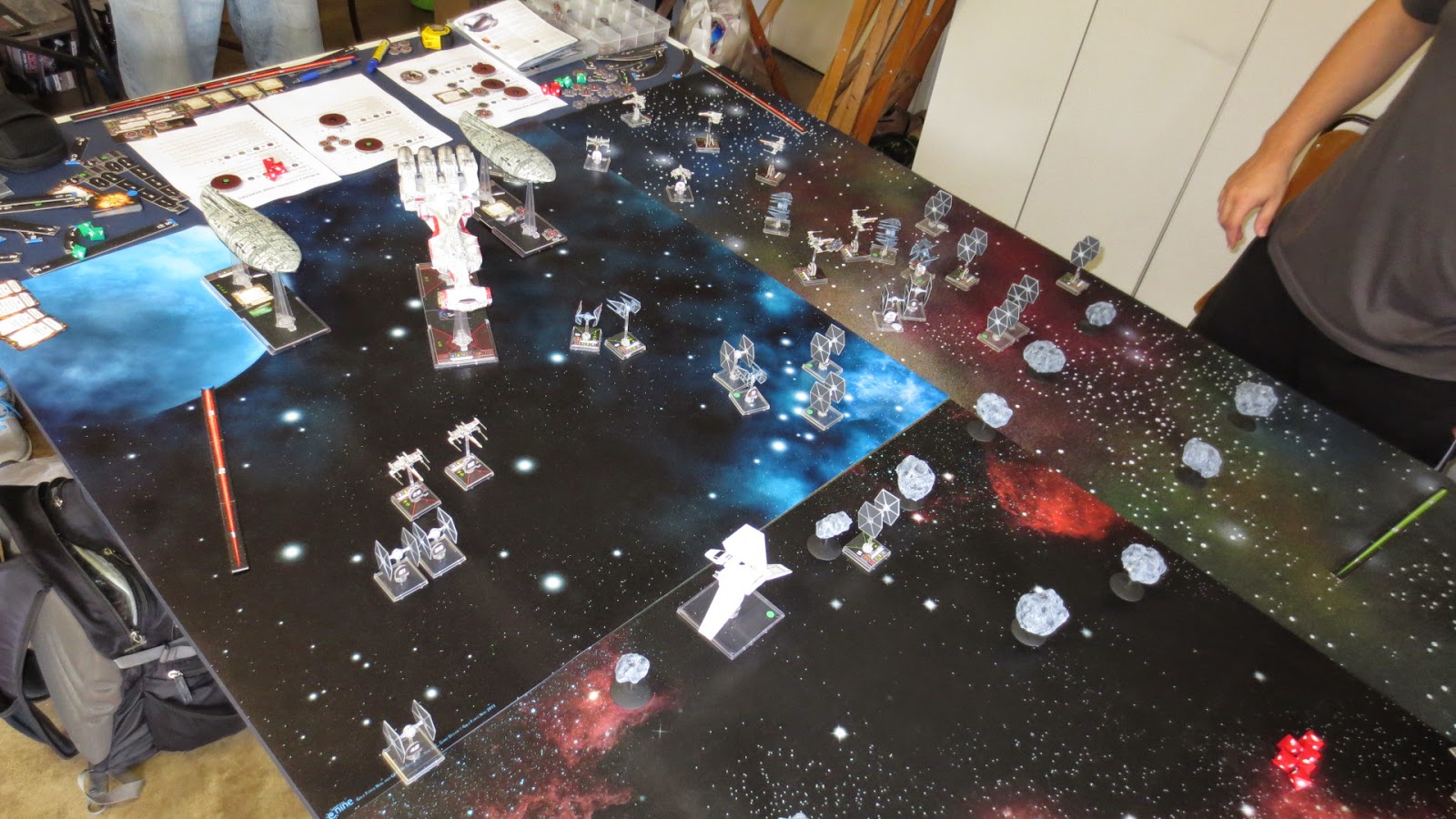 The Bombers go down (3 VPs to the Rebels), but leave a lethal surprise behind, heavily damaging all nearby Rebel ships while once again stripping the shields from the transport. 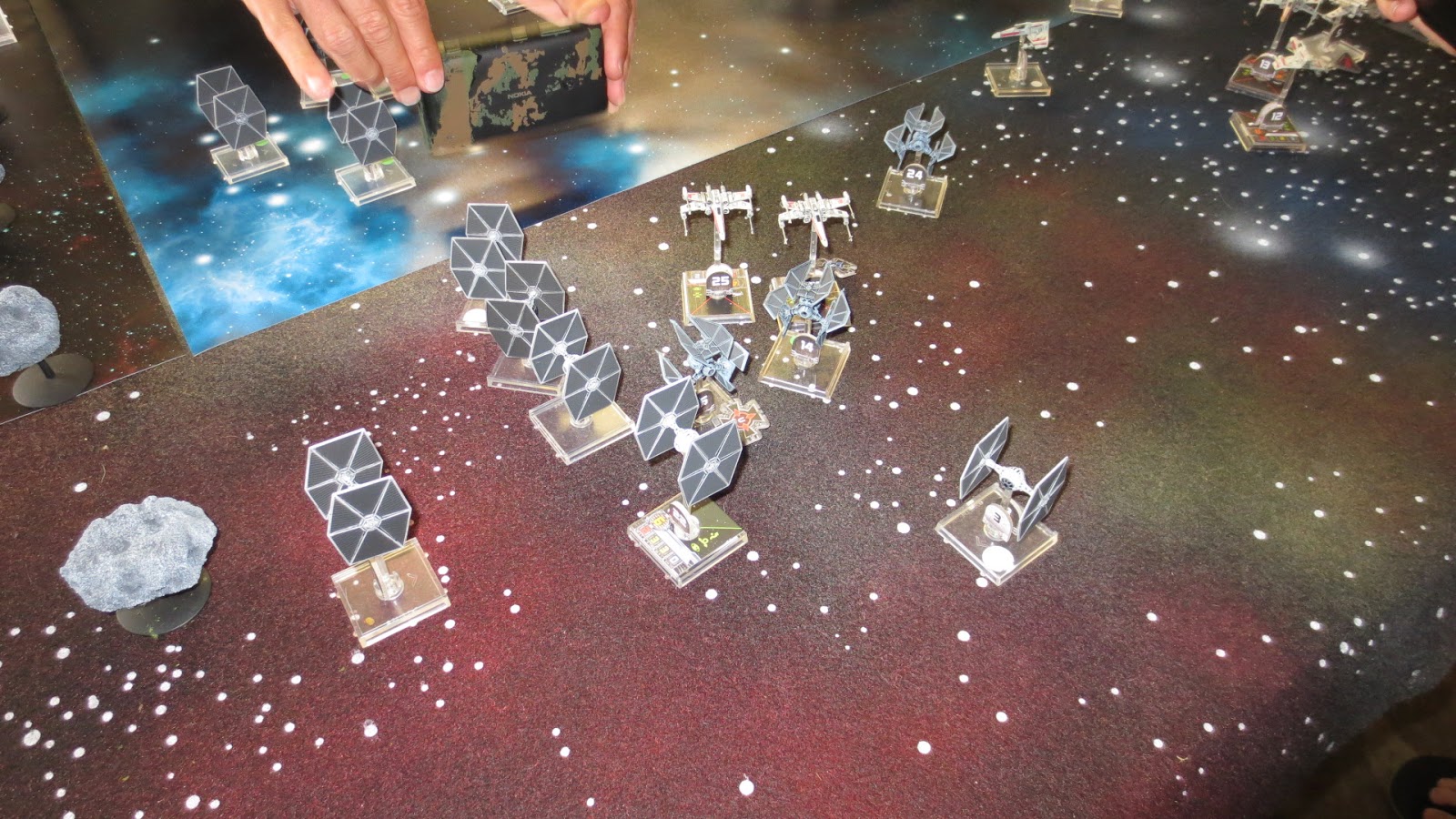 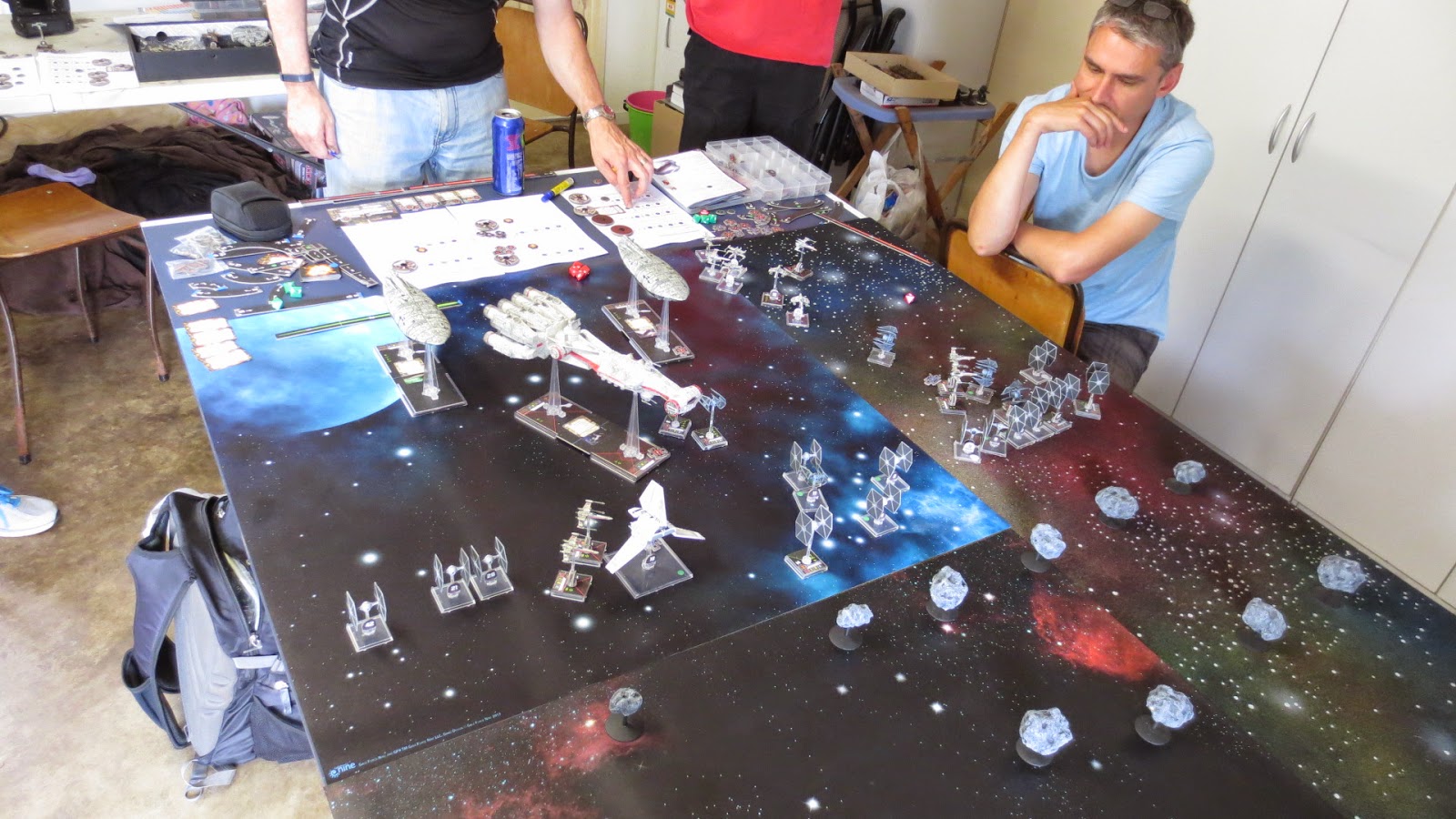 The Tantive surges forward, blasting away with everything at the leading TIE Interceptor, somehow missing every shot. 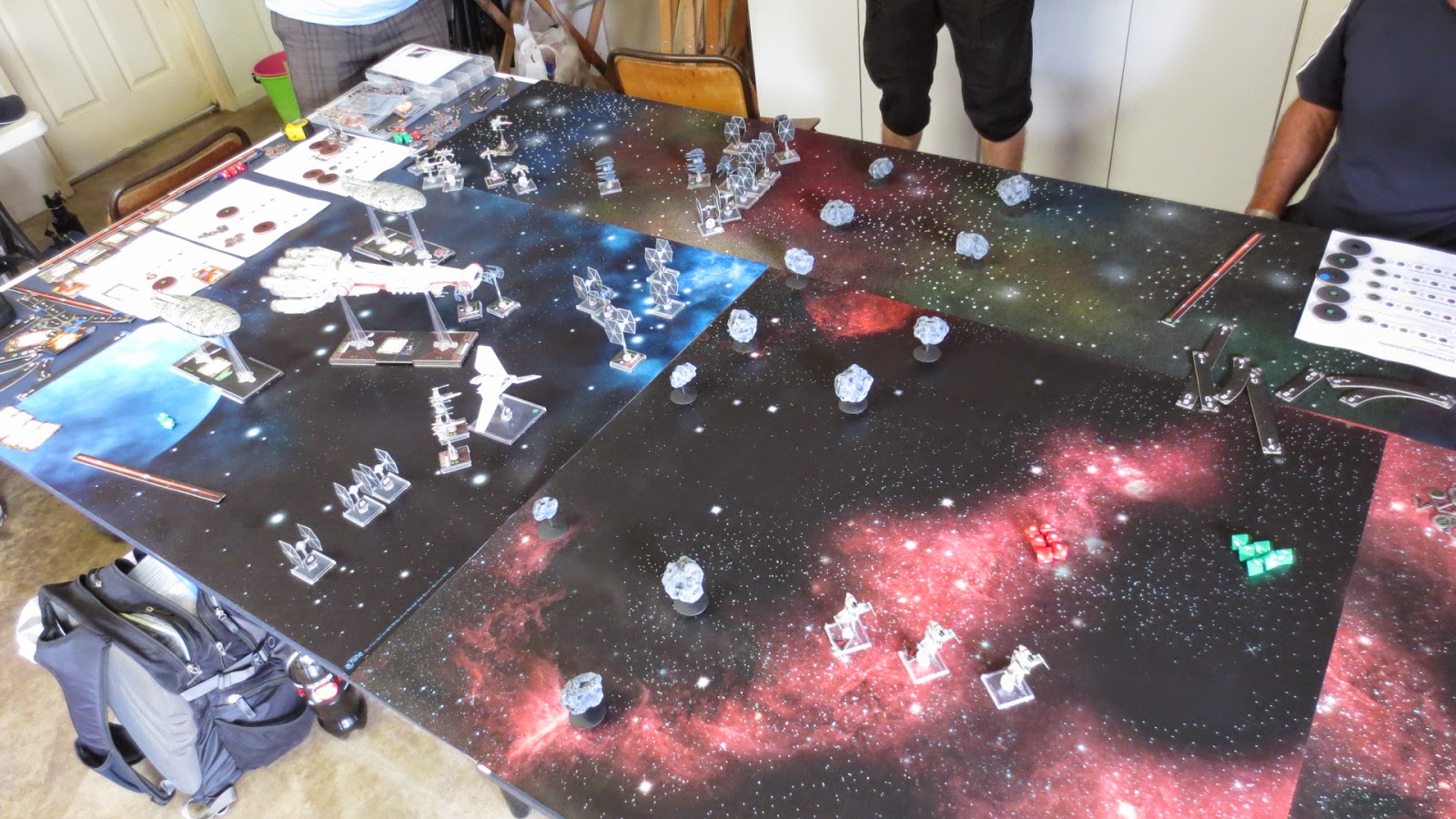 The fight for the centre is developing nicely. 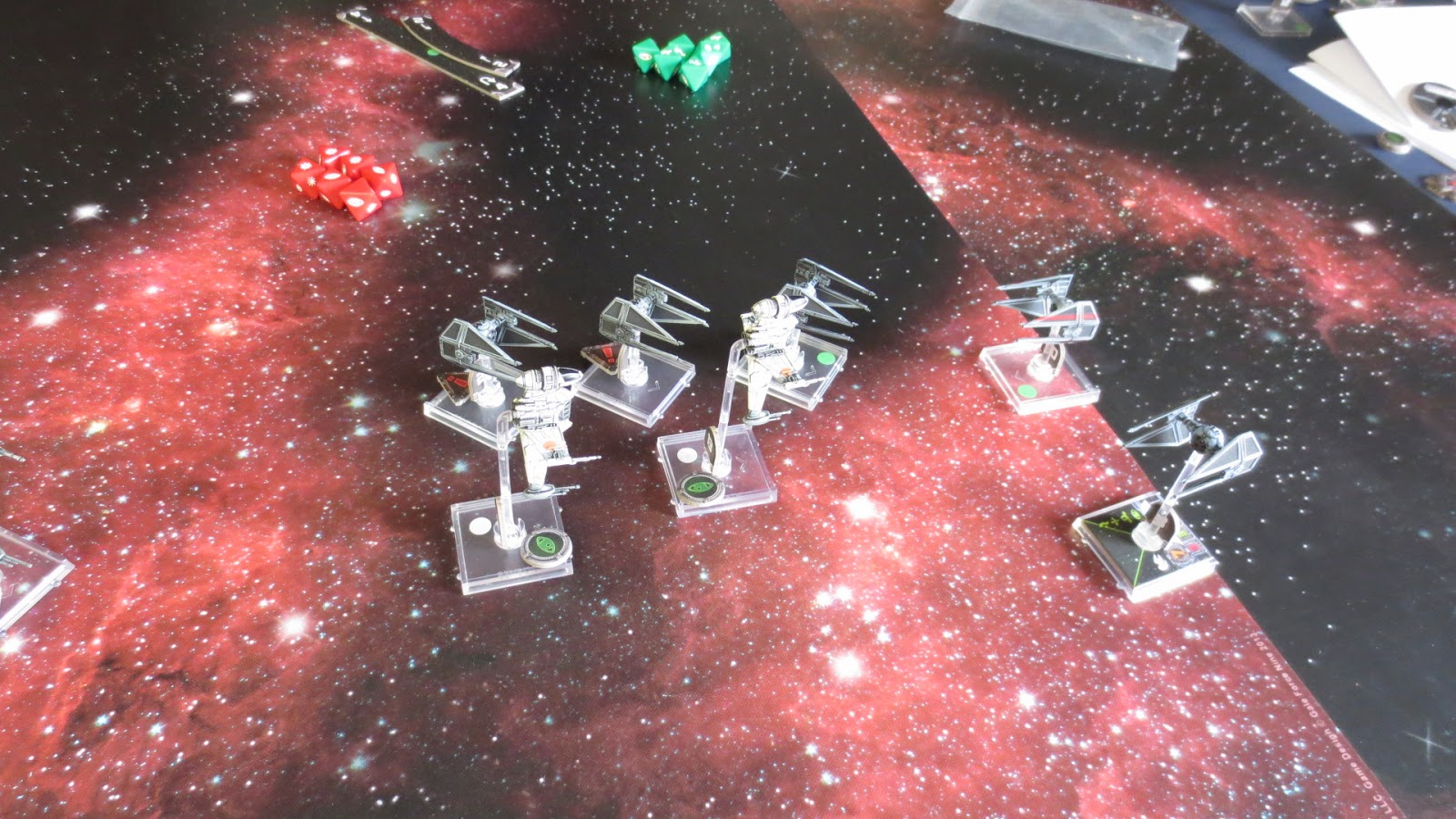 Trying to outmanoeuvre the B-Wings. This turns out to be a bad move, as the Rebels pull out the dirtiest 3 point card in the game, turning all of their pilots into Skill 12 monsters. 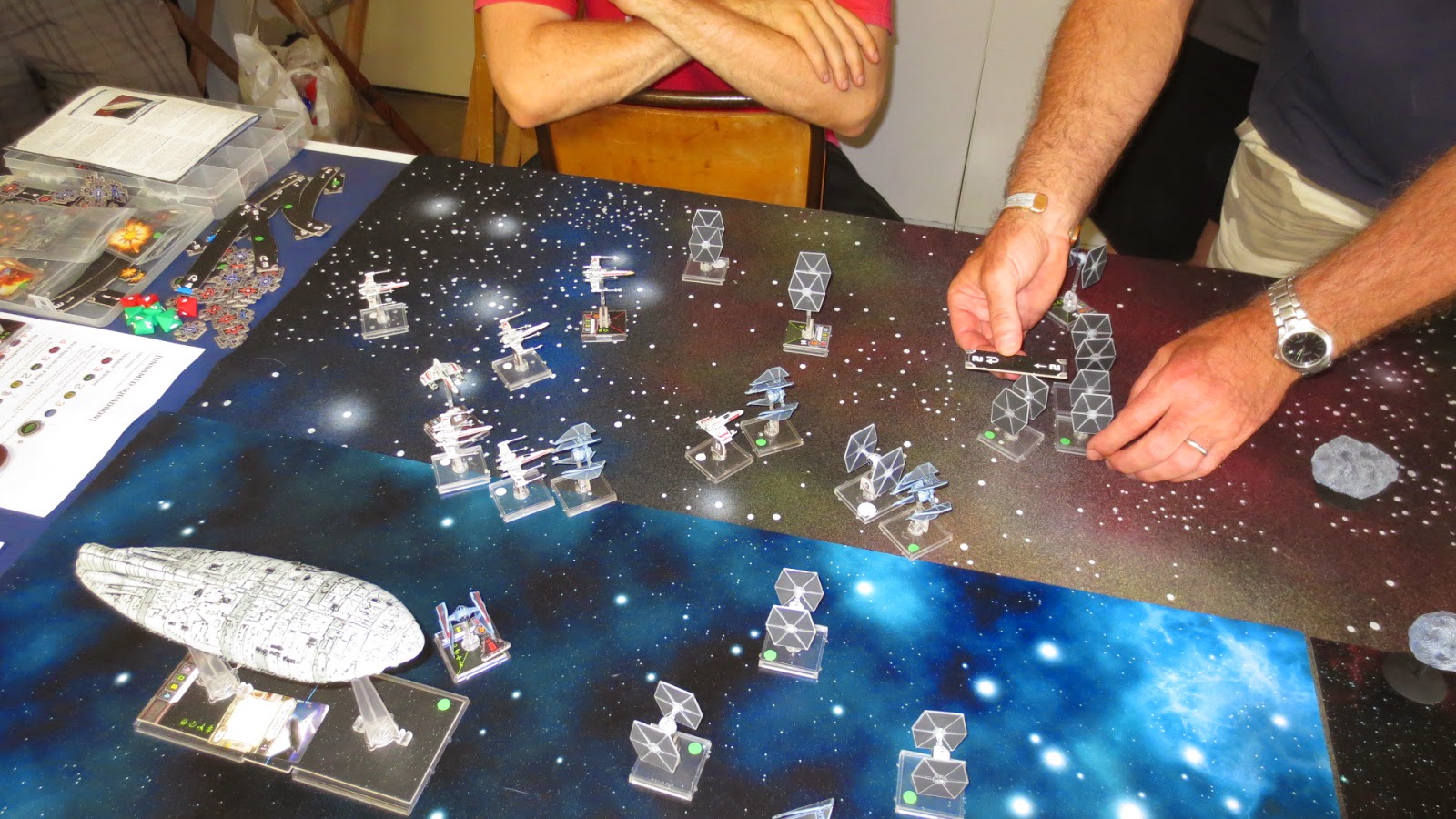 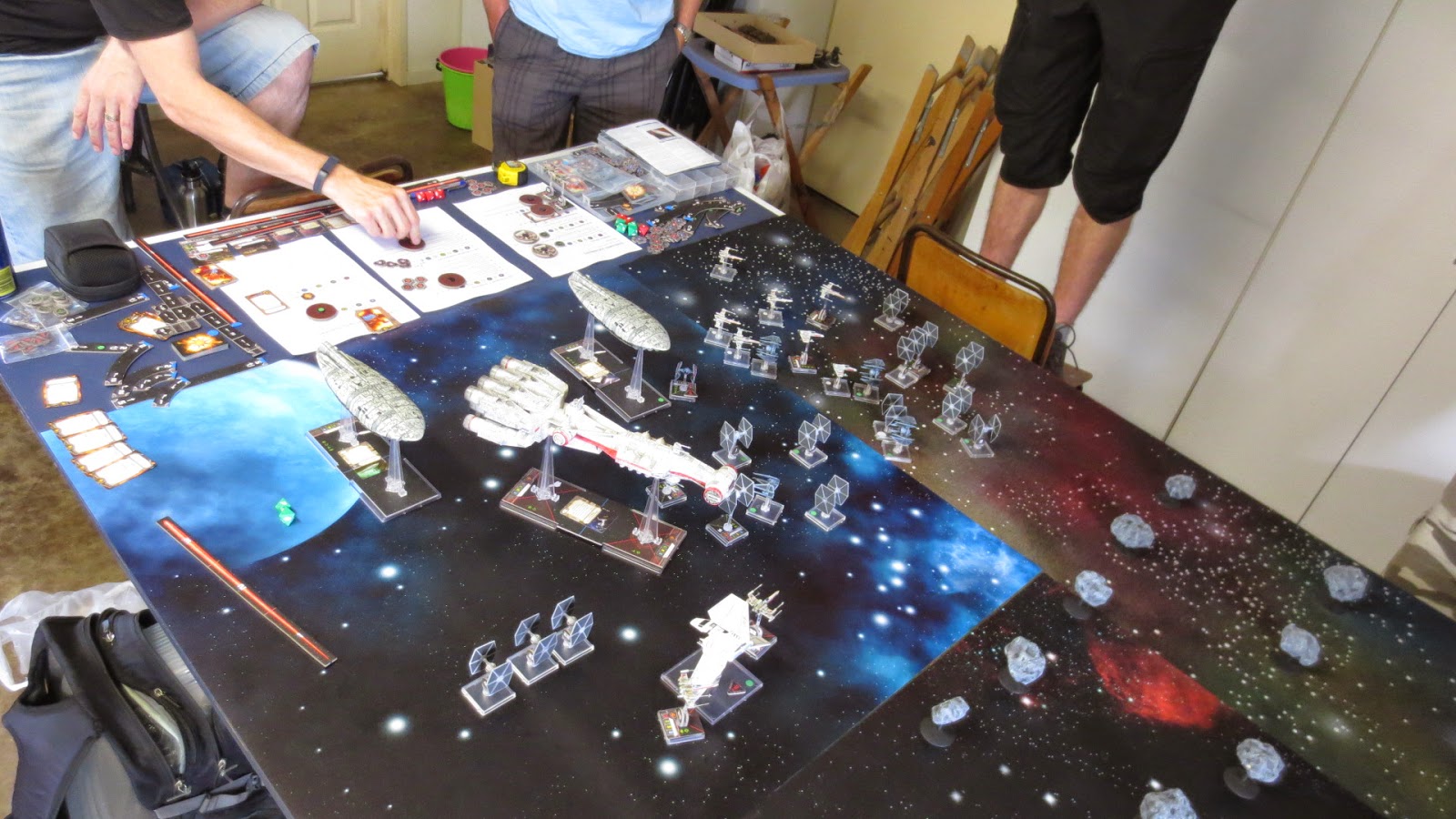 The Rebels done, everything in range rakes fire along the transport. 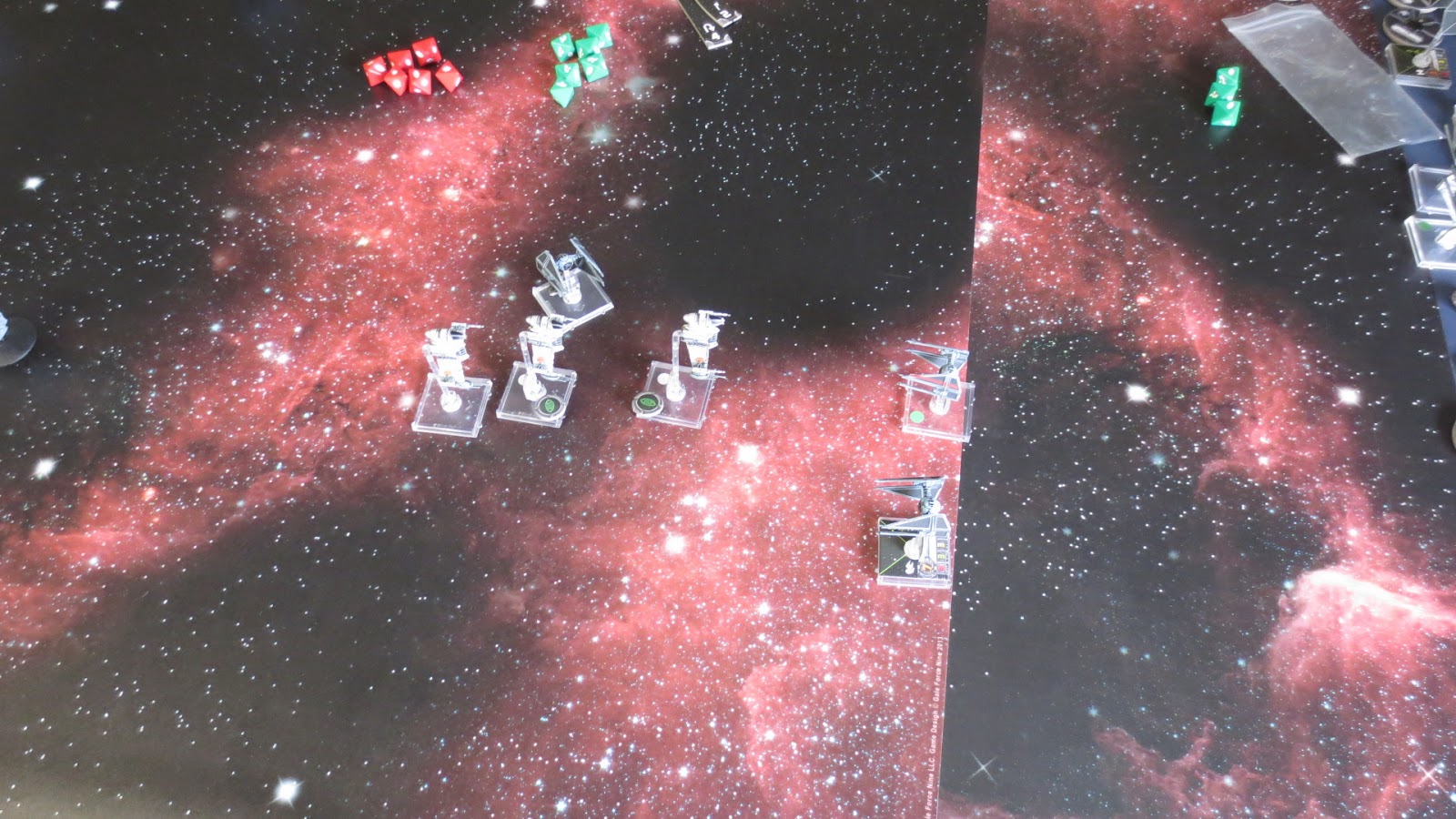 The Interceptors respond to the B-Wings, but now lack the numbers to inflict real damage. 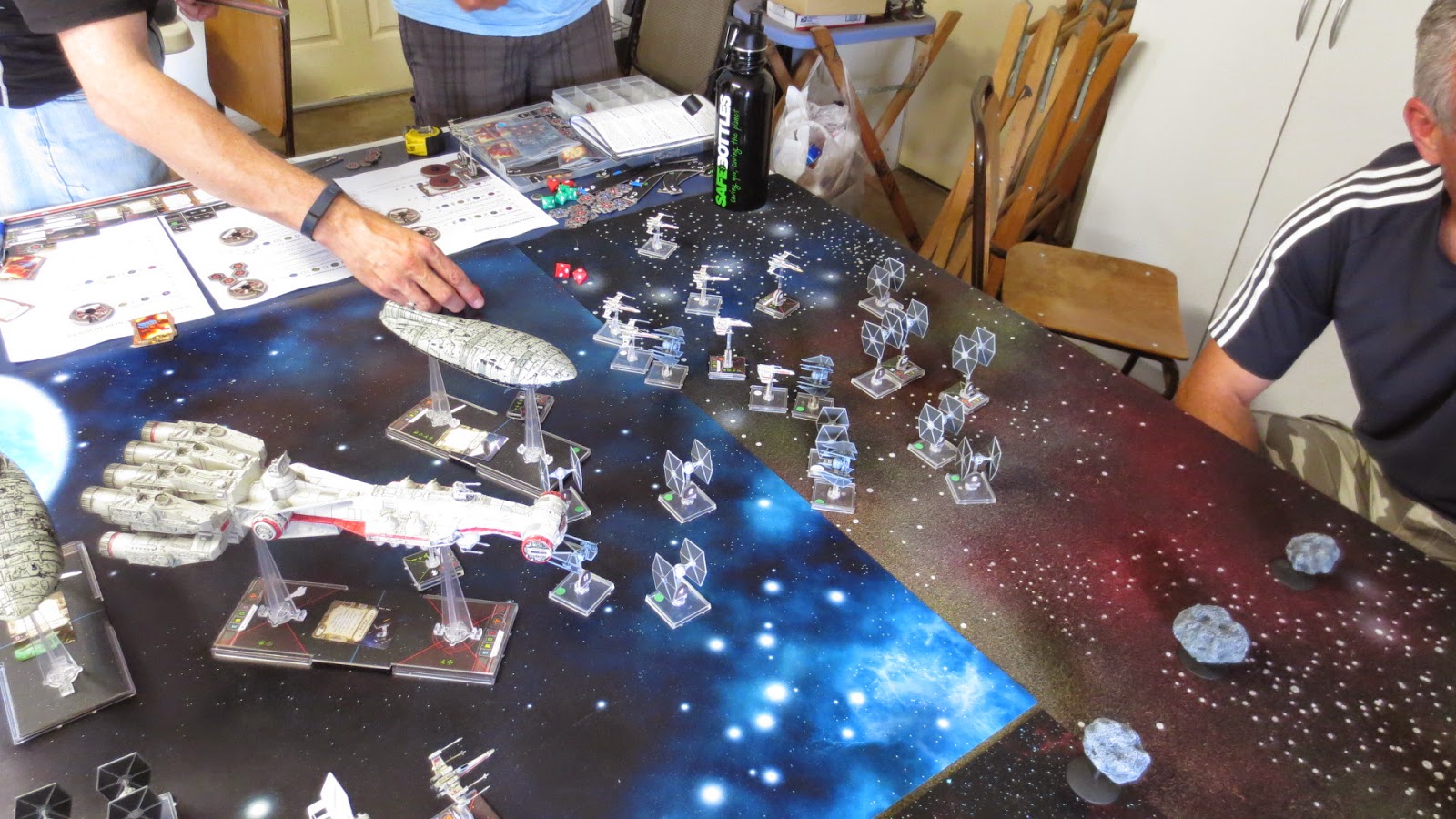 A TIE Interceptor strafes at point blank past the engines on the GR-75 transport, and is rewarded handsomely… 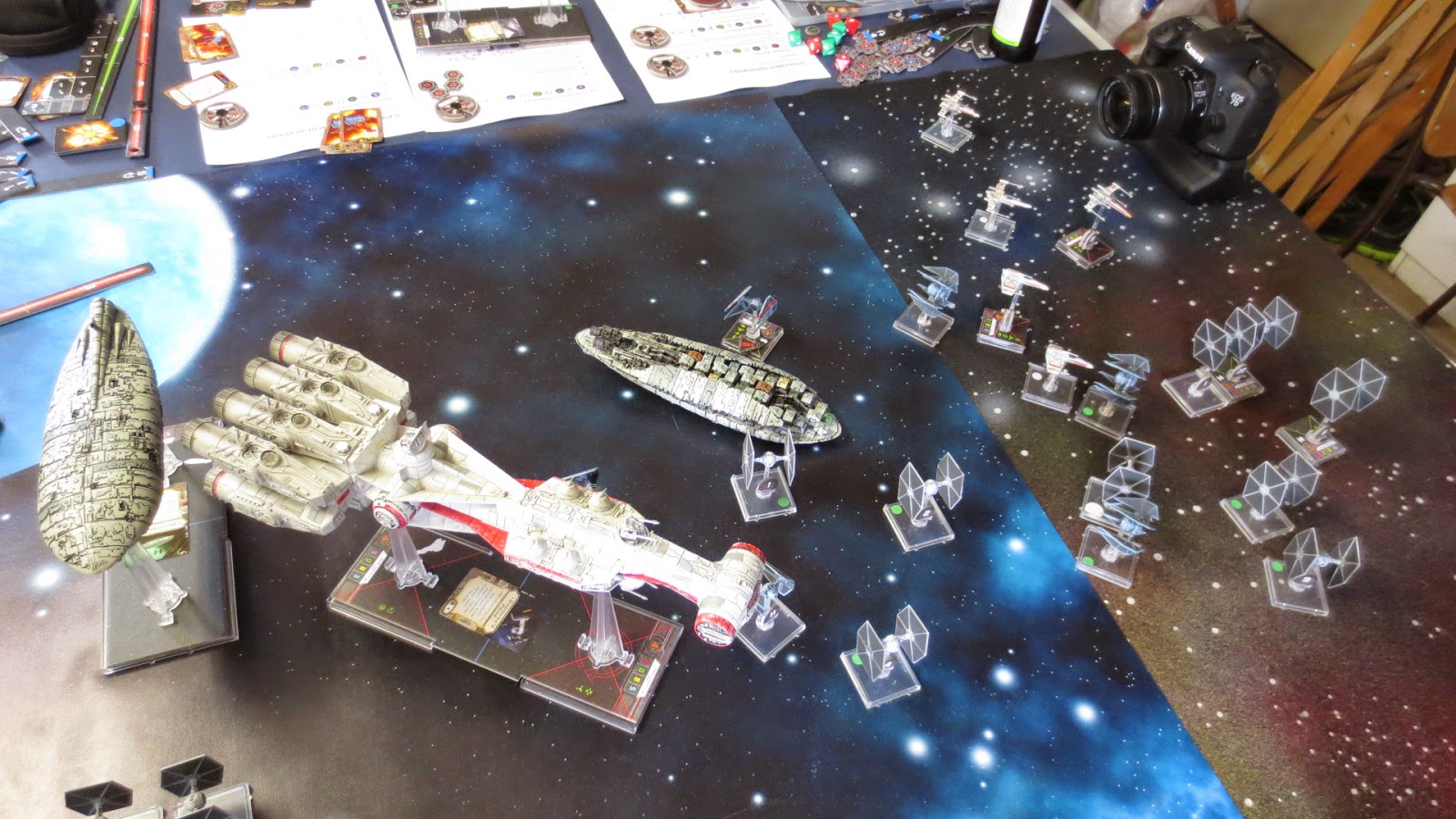 One dead transport. 5 VP to us. 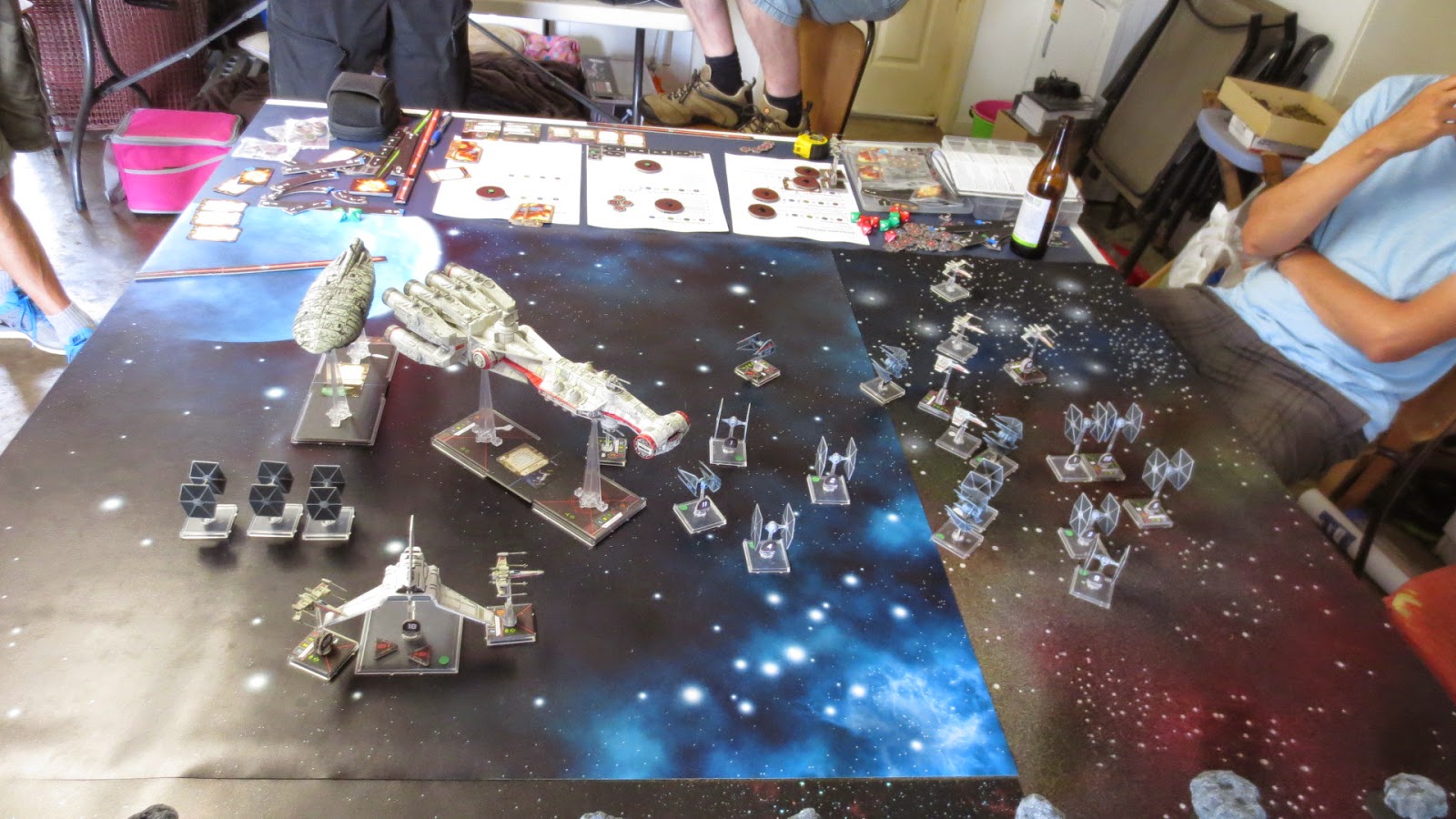 Next we concentrate on the Tantive. The forward section is attacked by close to a dozen different ships, and is soon wrecked after a staggering number of criticals. 5 VP to the Imperials. 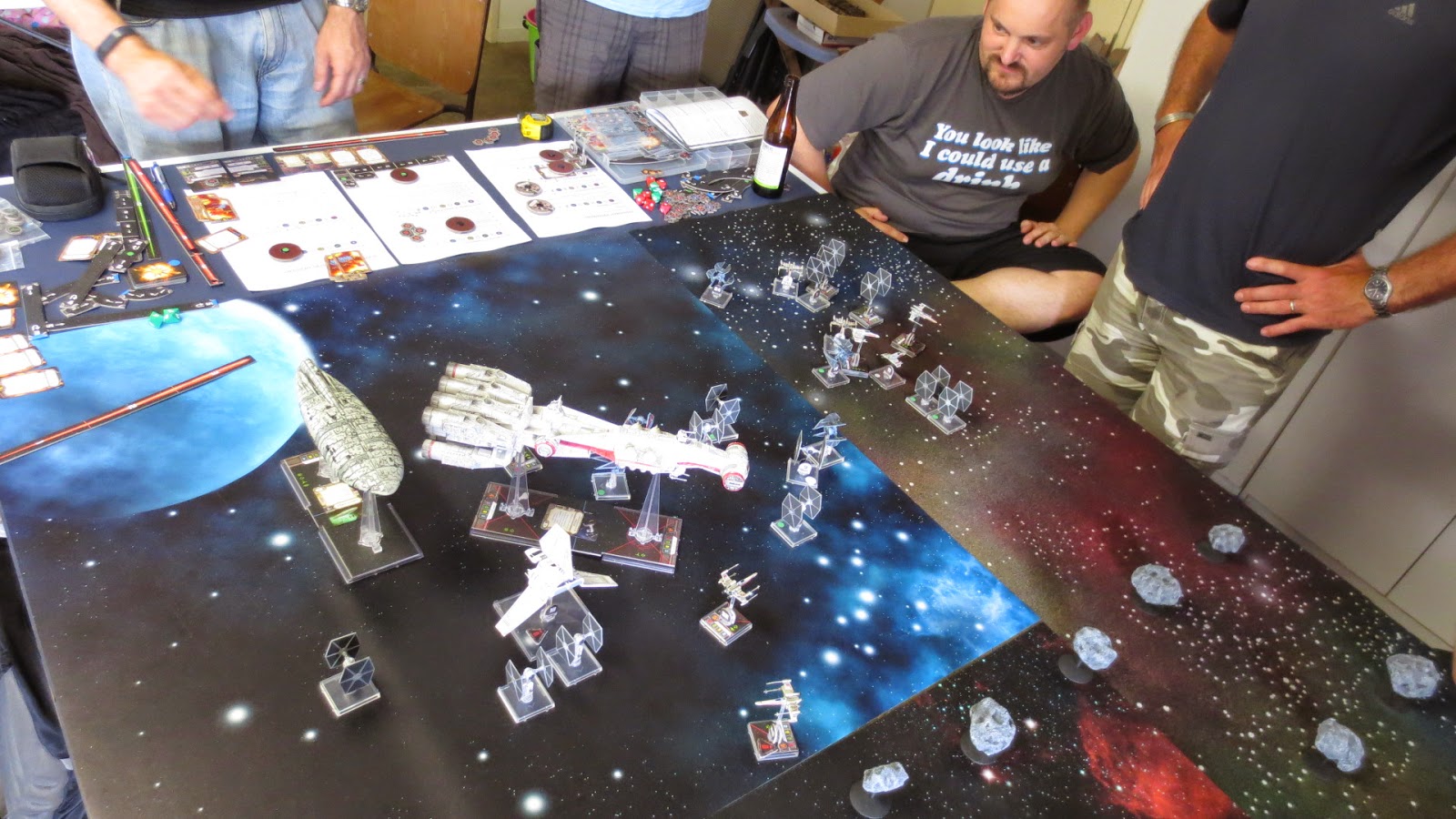 With only its engines left, the Tantive turns battering ram, running down as many TIEs as possible. One, in this case. 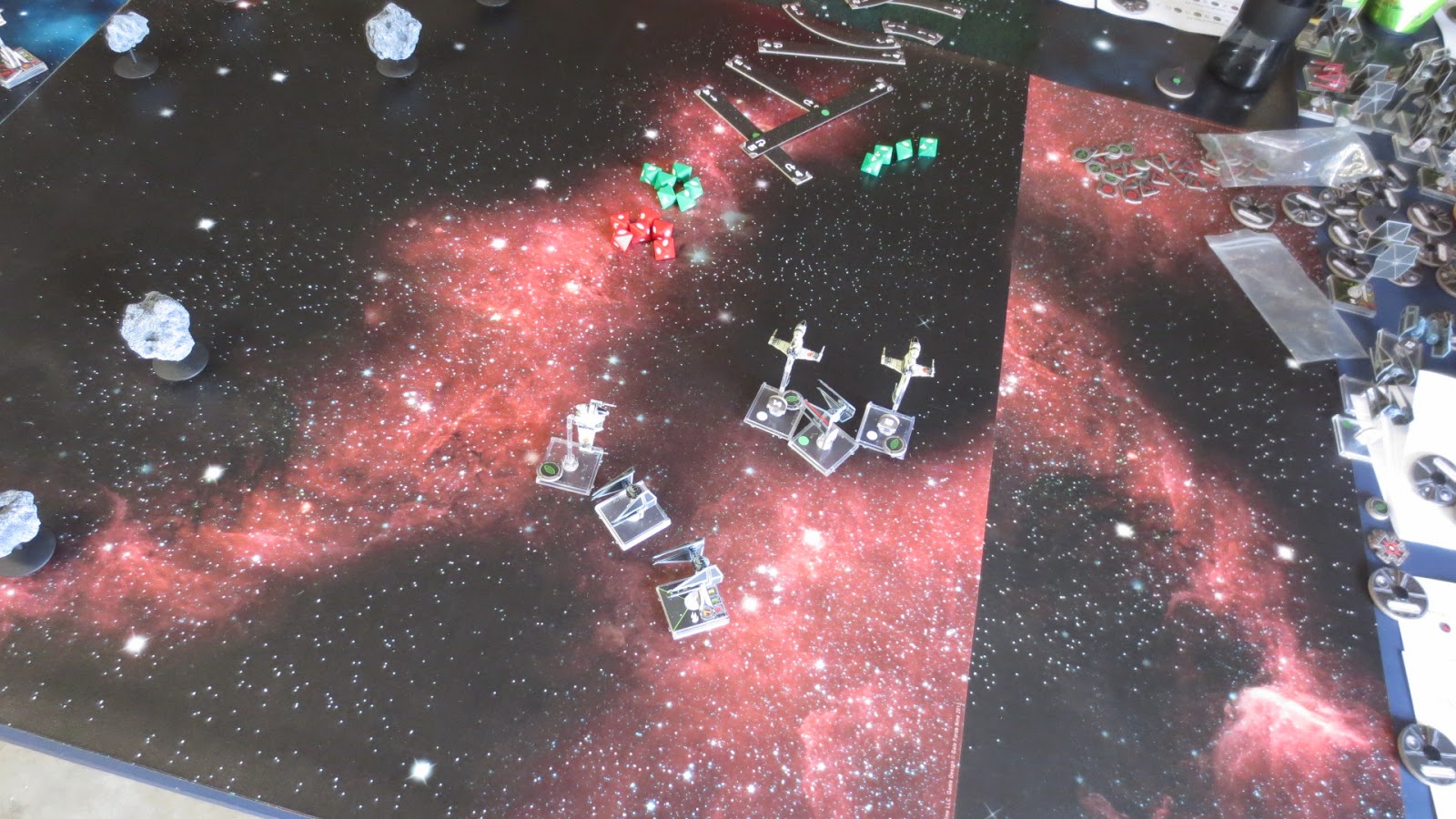 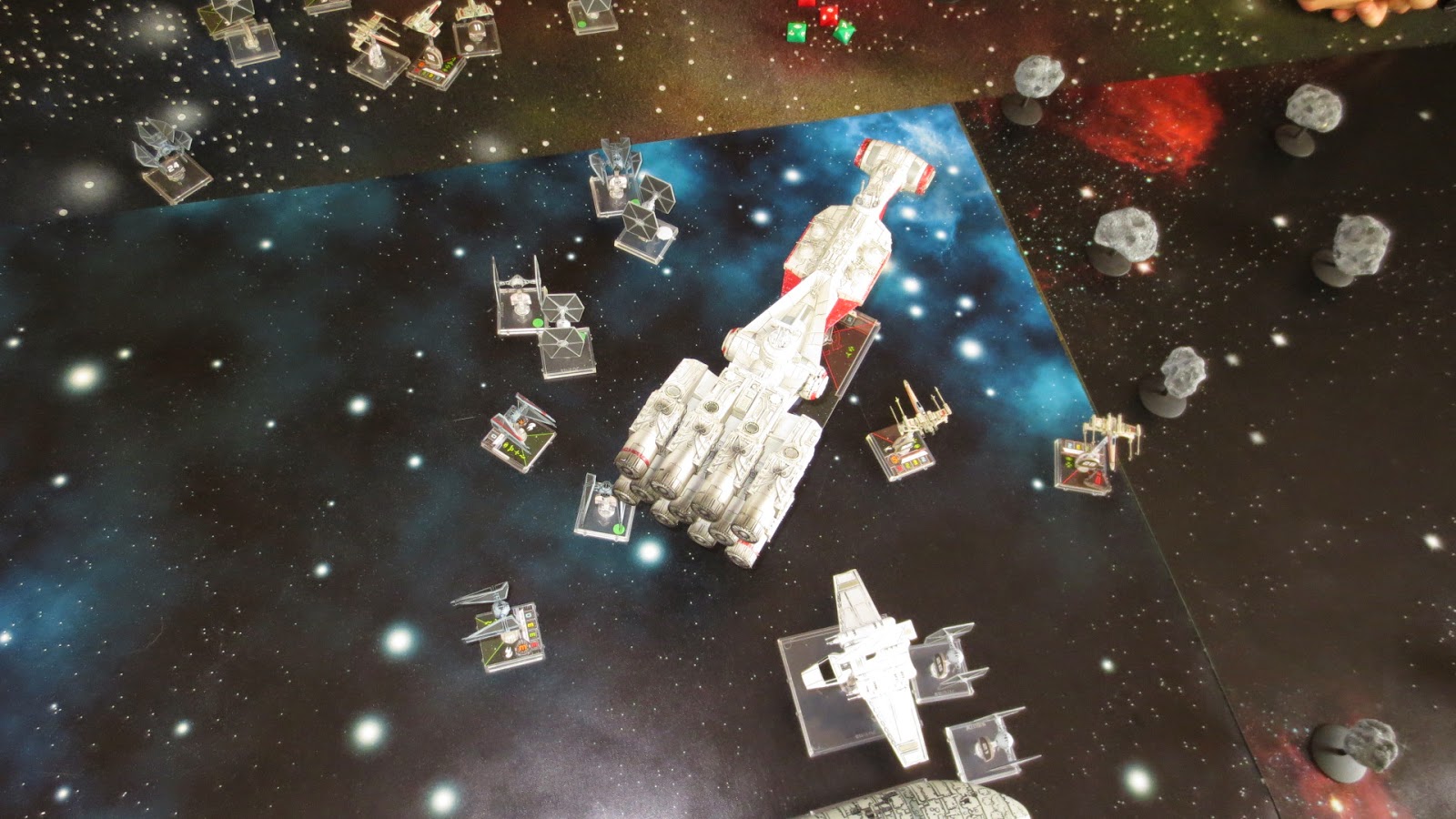 Slugfest against the Tantive. 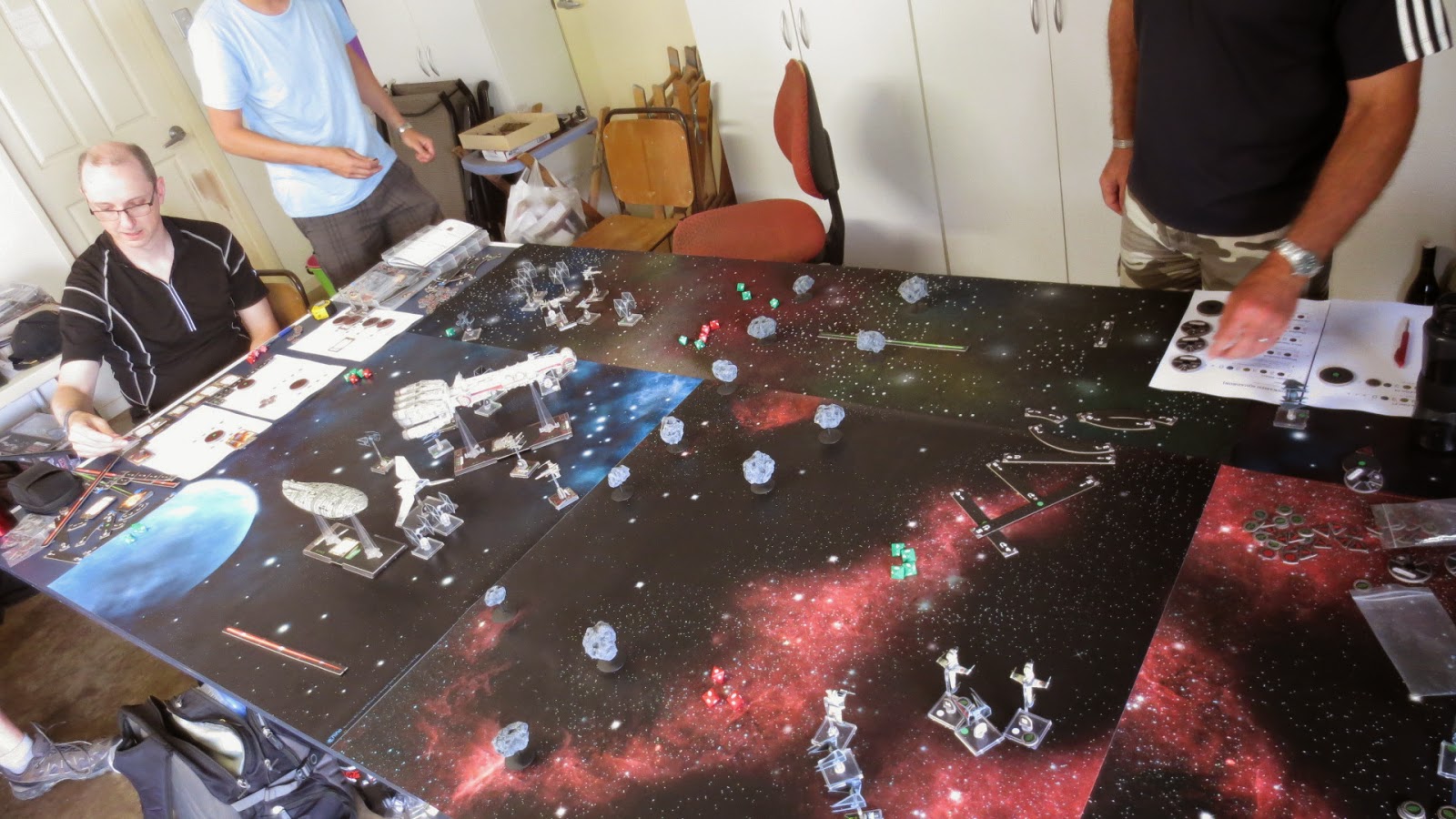 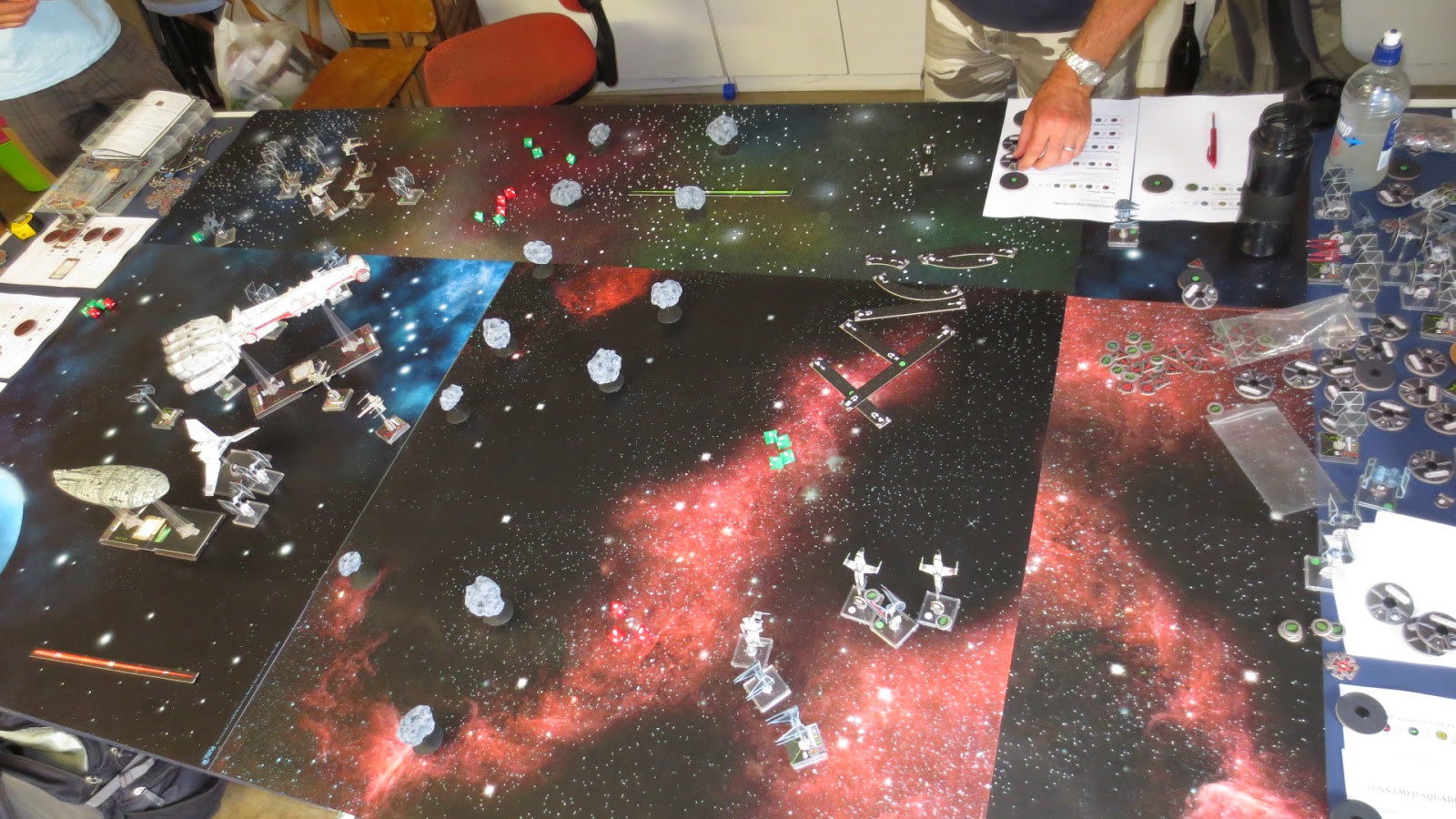 Imperial position looks quite secure at the end of 9 here. We just have to inflict a little more damage to win. 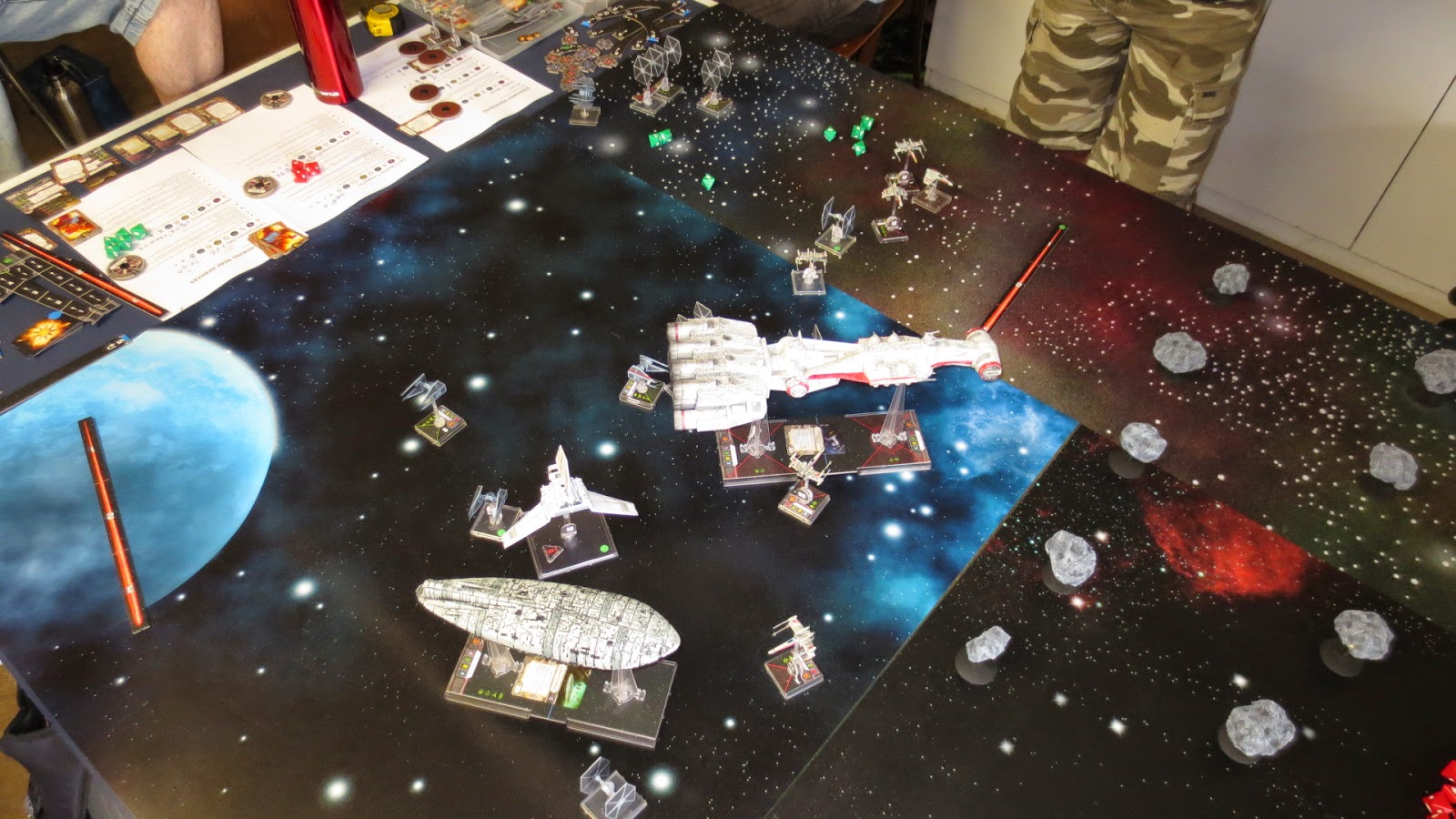 Turn 10, and as much fire as possible it poured into the Tantive's rear, reducing it to 1 hitpoint that we just can't kill. 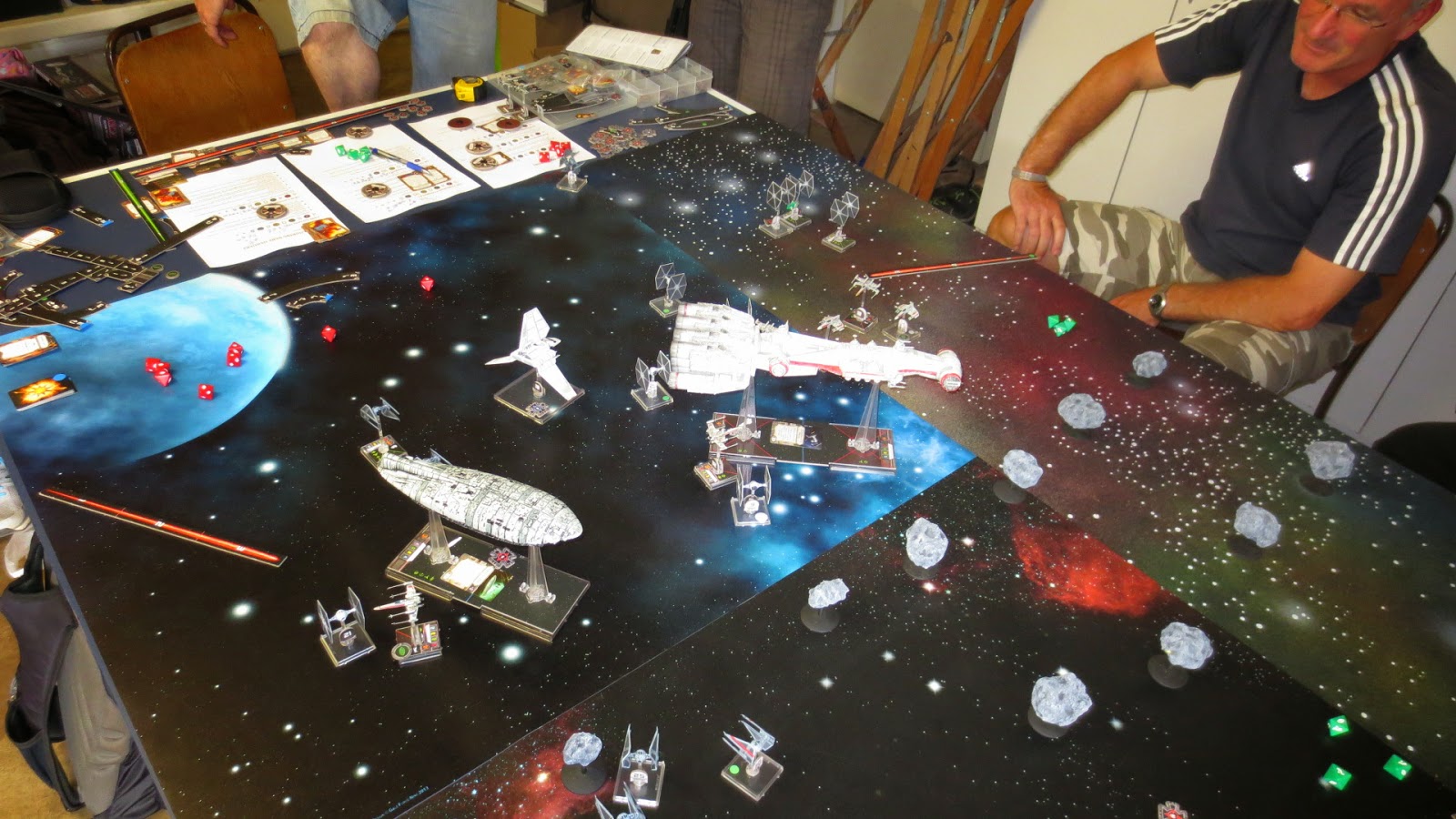 And that 1 hitpoint gives the Rebels the win, because all the ships had to do was survive until Turn 10, regardless of damage.

If we'd had even slightly better luck, it would have been 15-7 in our favour, rather than 13-10 against. Still, it was a fun game, and the sheer number of ships on display was awesome. We'll probably do another one at some point, just maybe not quite so big.
Posted by Ravager Zero at 19:02 No comments: