Sunday was a good day. Three games in all. LotR against Mark in the morning, cooked up a 500 pt Gondor list to take on his Uruk Hai berserker horde. Mark played a good game, but forgot something crucial about his army: everyone gets two attacks. I'm not familiar enough with the LotR profiles to remember that stuff. So it turned what should have a been an uphill struggle into a fairly even match.

I just squeaked a win in the end, with Boromir slaying Mark's second troll. The first troll very nearly died from the first round of shooting in the entire game. So many 5's and 6's in a single roll I have not seen in a long time. Hilarious seeing a troll turn into a pincushion from just 5 bowmen.


Most of the battle revolved around the bridge over the river. By which I mean by guys got horribly slaughtered up there when the troll arrived. They did fairly well until then, with me and Mark losing roughly equal numbers of warriors. The troll did well until it tried facing Boromir, which led to a solid face-walloping with the Banner of Gondor. 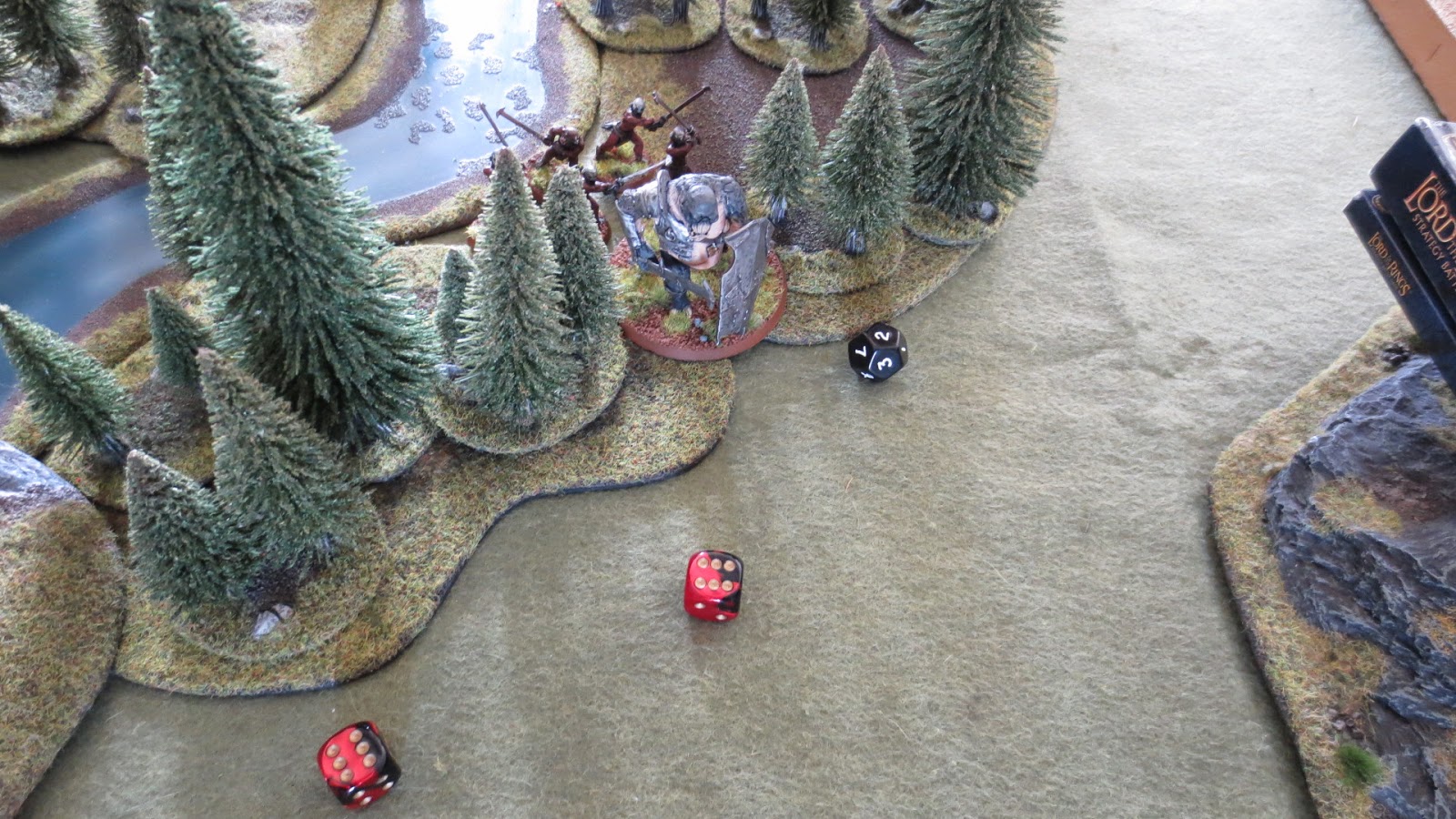 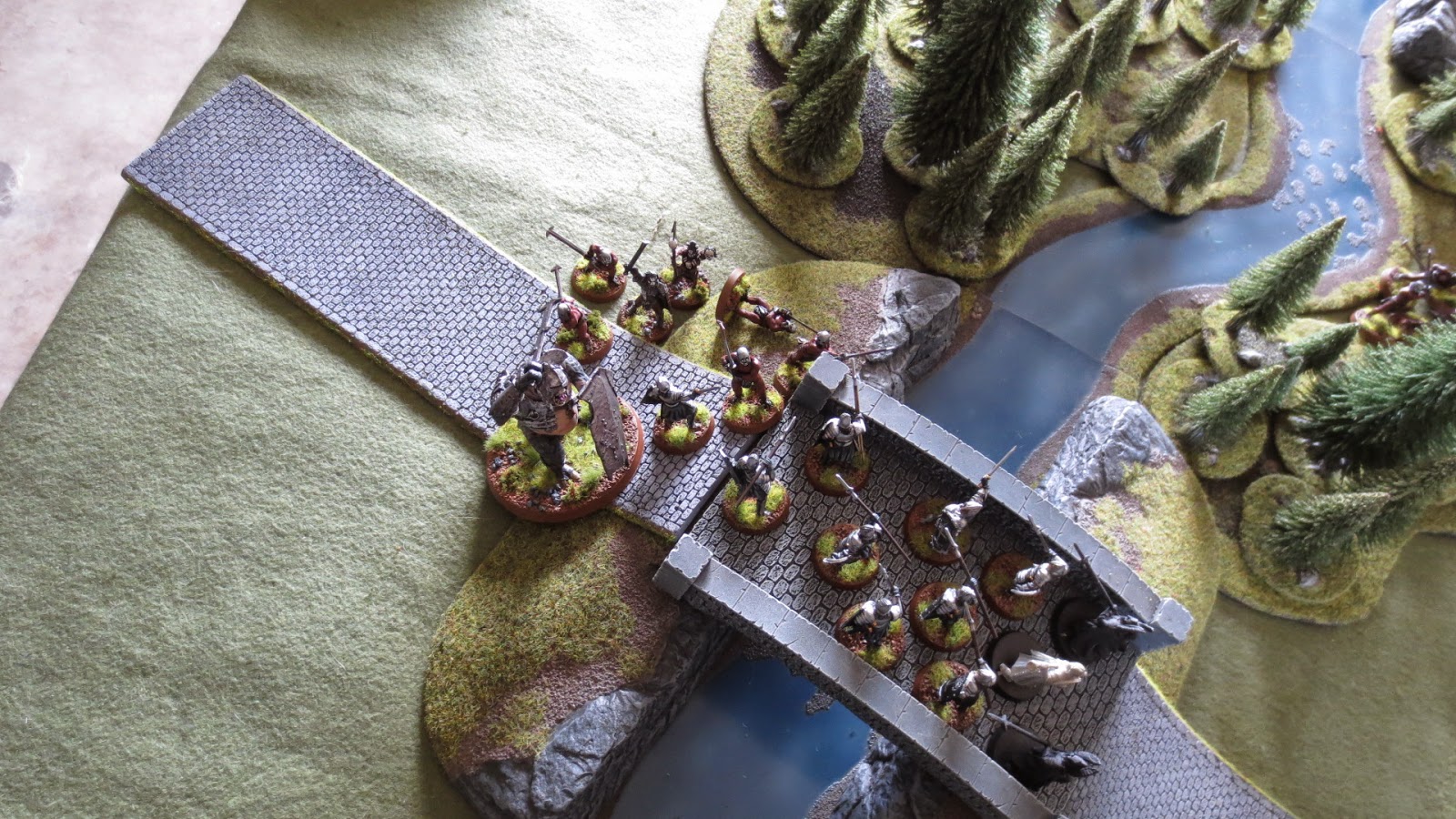 The bridge, mid-game. Berserkers vs Warriors of Gondor. Pretty even so far, but that troll is very close. 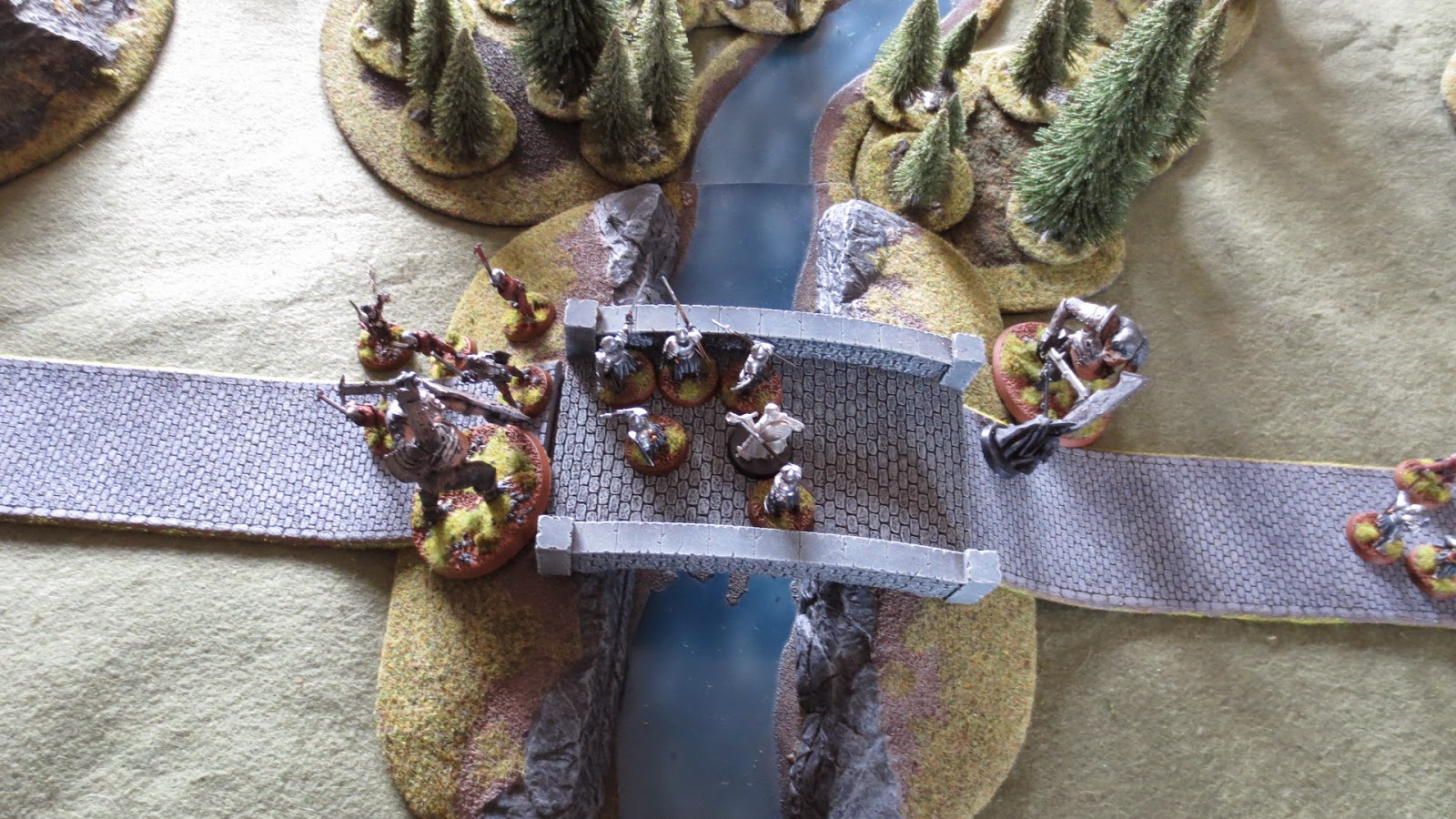 Later that day. Two trolls and a bridge. I'm running quite low on warriors. 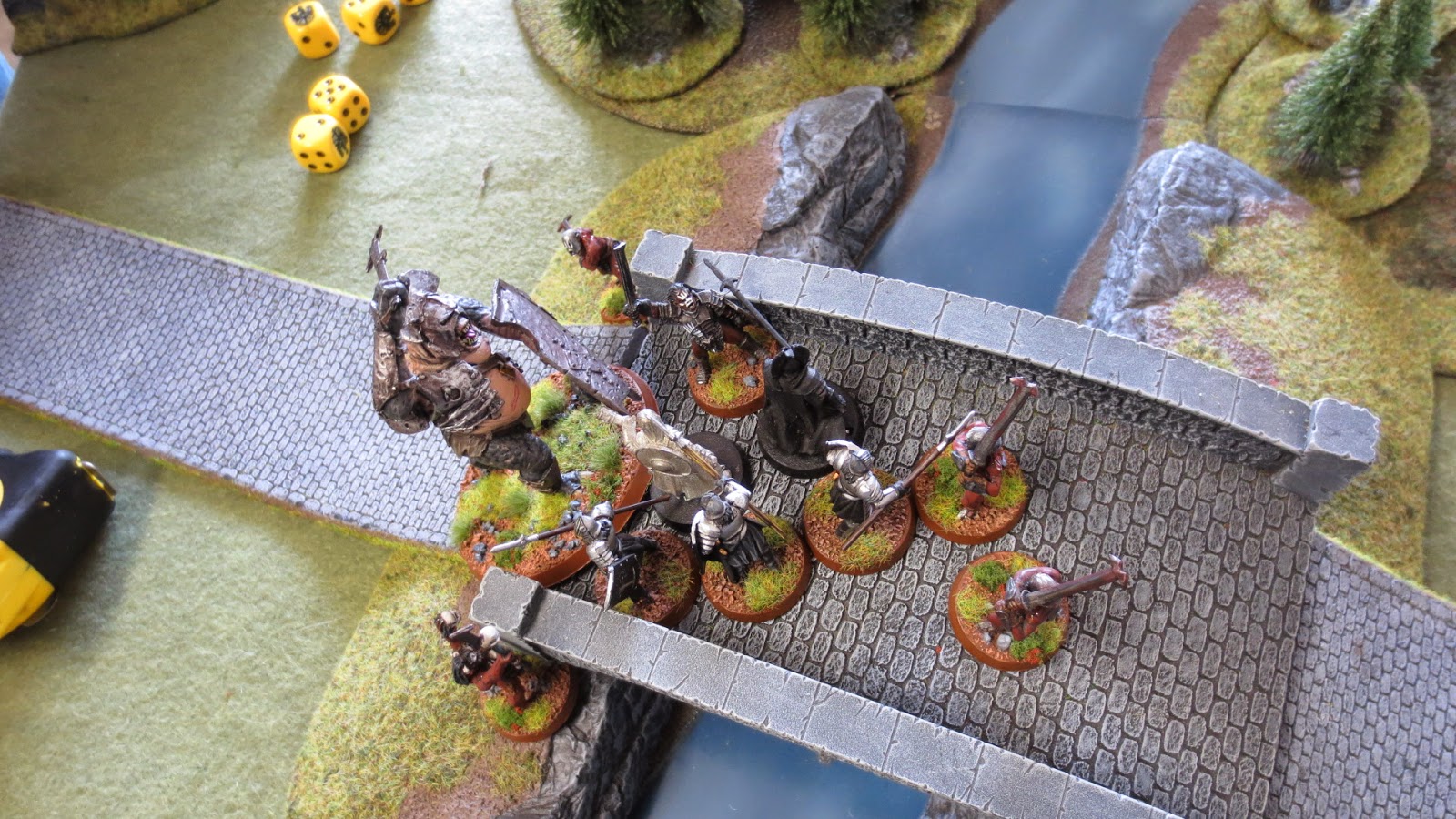 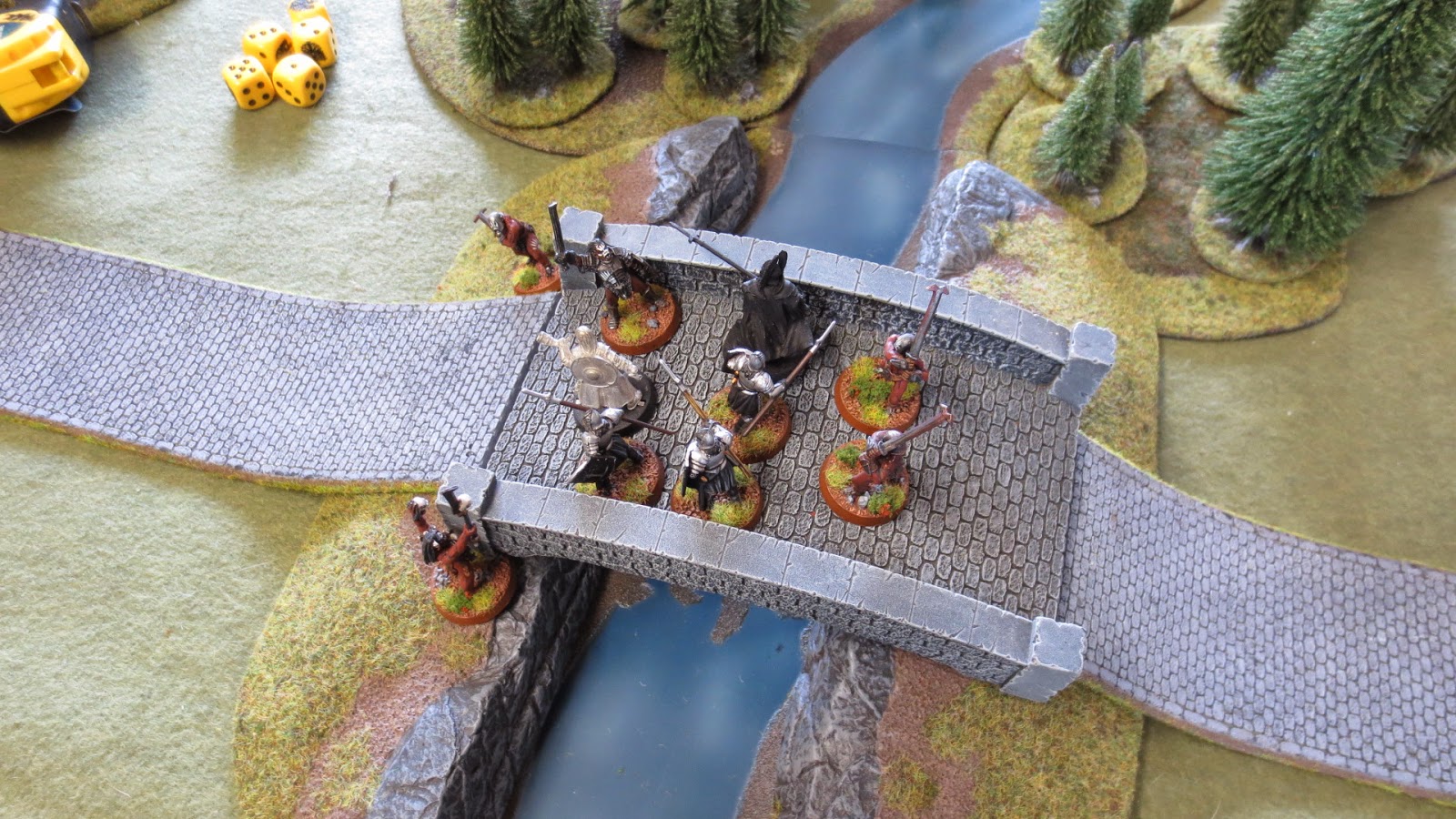 Look ma, no trolls!
And that was that, end of the game. I had an untouched Boromir, three warriors, and a guard of the fountain court. Mark had 3 berserkers and a shaman.
Next up was a couple of games of Kings of War. We played with simultaneous turns, priority roll, move/move, shoot, fight. Much faster than even regular KoW games. They were brutal too. I also learned why Elohoi regiments clock in at over 300 pts. 18 attacks with Crushing Strength (2) that hit on a 3+ are deadly. Combine that with Flying, 10" move/20" charge, and Defense 6, it's nuts. Oh, and they also have regenerate. There were comments about "broken" angels.

Then again, I'm shelling out nearly 400 points, including upgrades. Nearly half my army at 1000 pts. It'd had better hit and soak damage like it costs 400 pts. 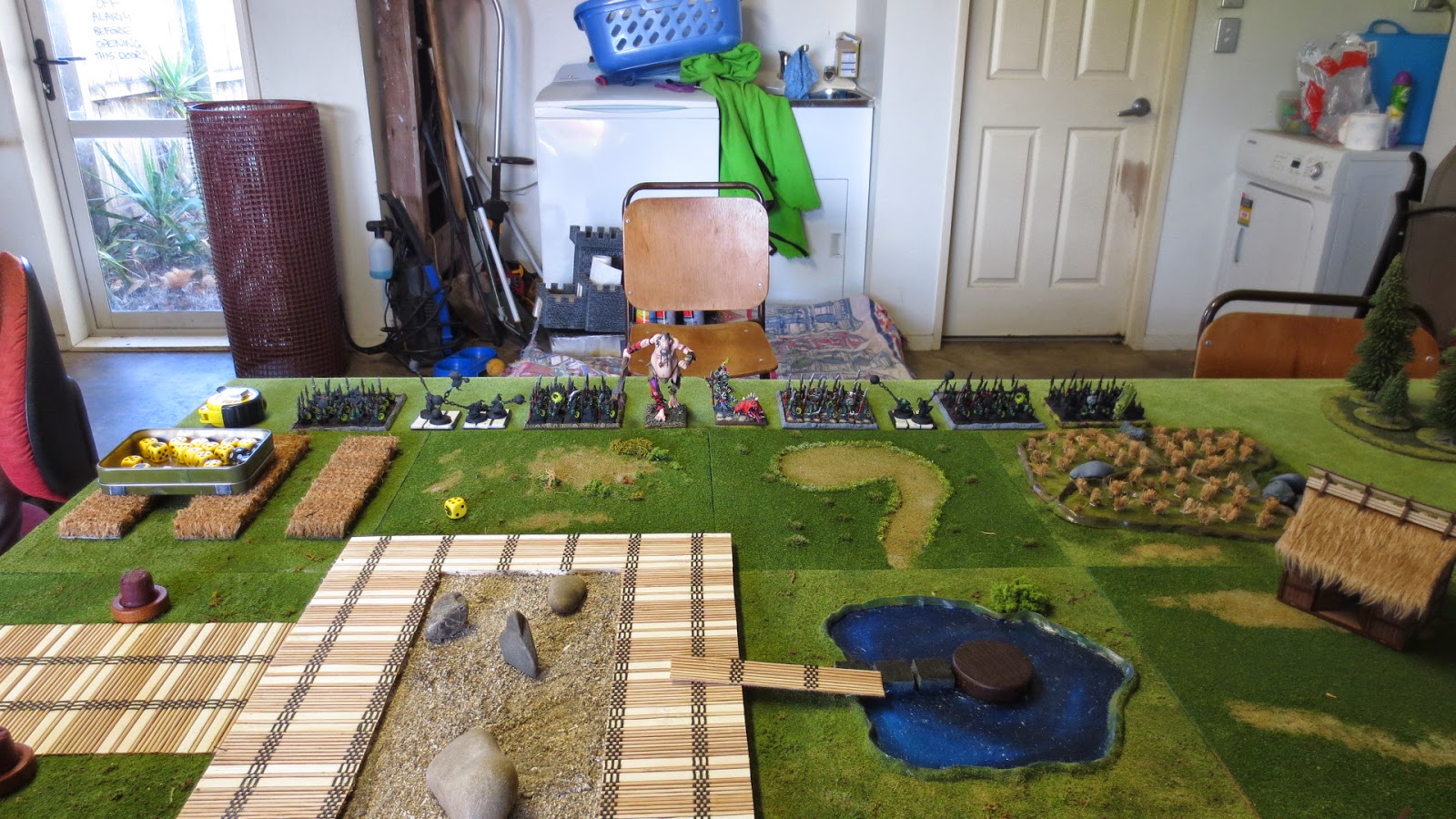 Anyway, first up was Mark's goblin horde. Also known as the "excuse me; how many units?" army. 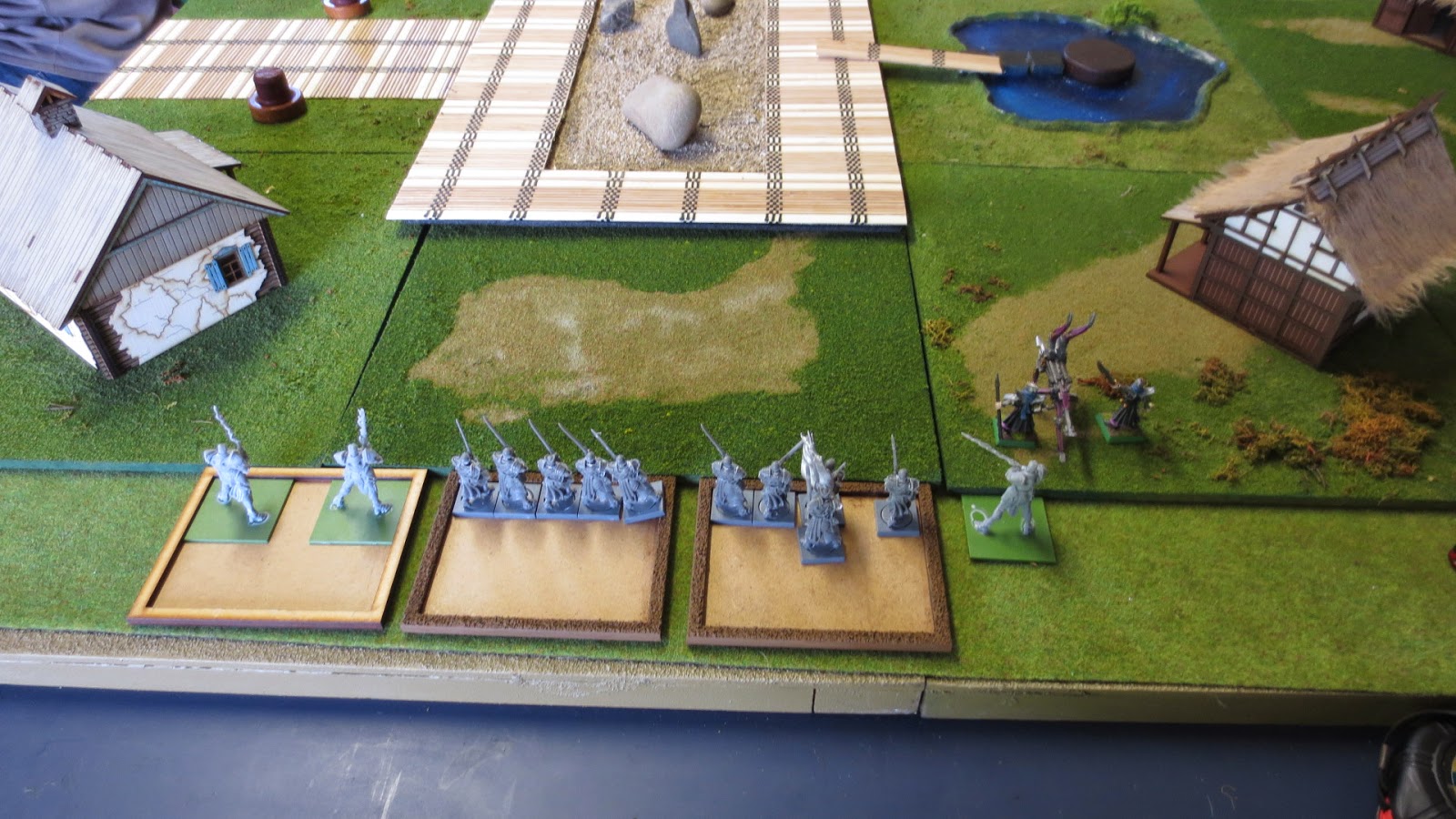 For reference, that's 5 units of goblin sharp-sticks, 1 of bow armed gobbos, 3 mincers, 2 heroes, and a giant. 12 units all up. I have 5. 2 Paladin Regiments, Elohoi Regiment, Ur-Elohoi hero, Heavy Arbalest (war engine). They lack a little in the manpower department as I need to get some more models. 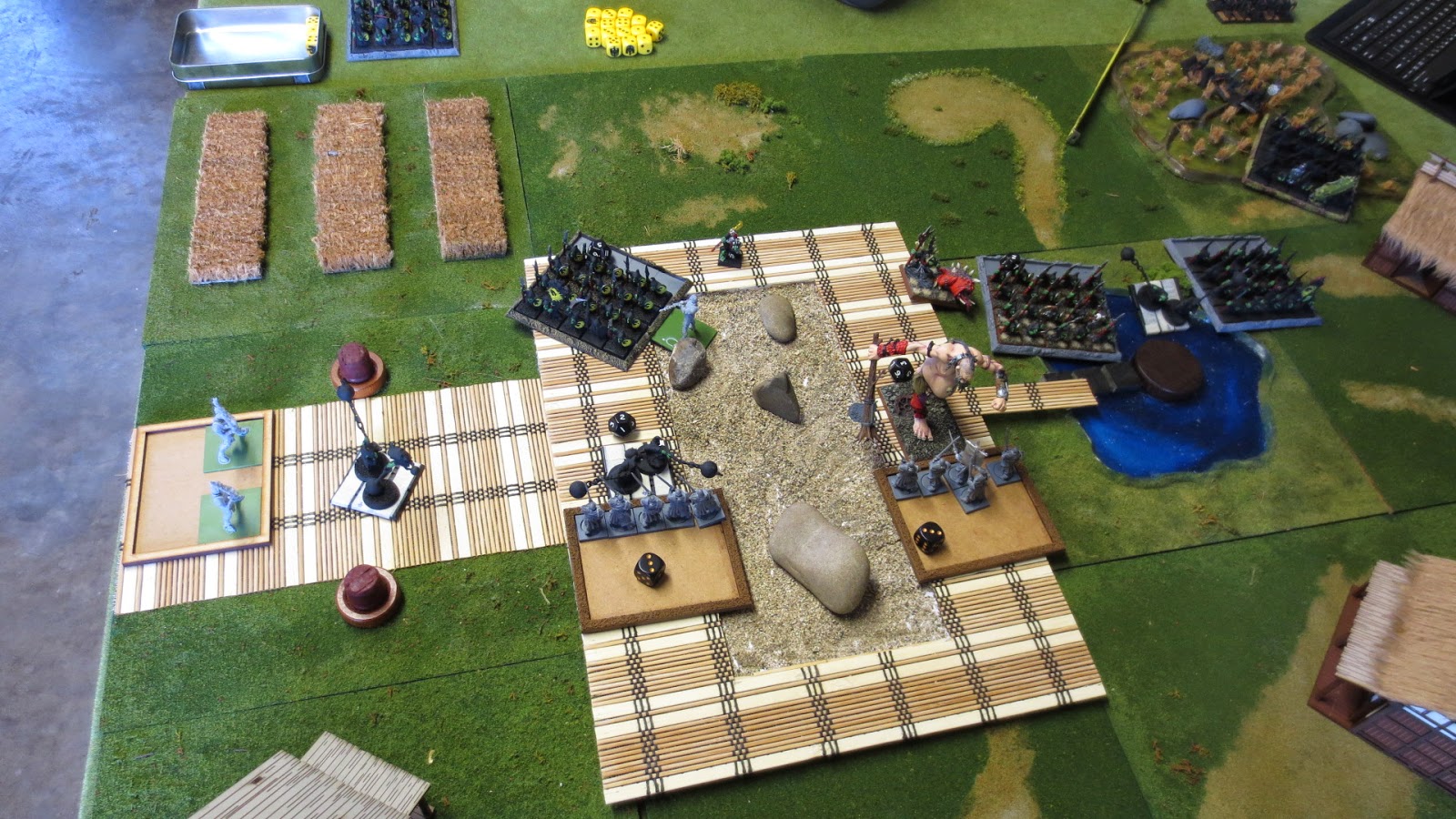 Turn 3 here, I think. Elohoi regiment has done some damage to a large unit of sharpsticks (ie: ripped them to tiny little pieces of gobbo), and both Paladin regiments are engaged. Giant does nasty things to one of them. 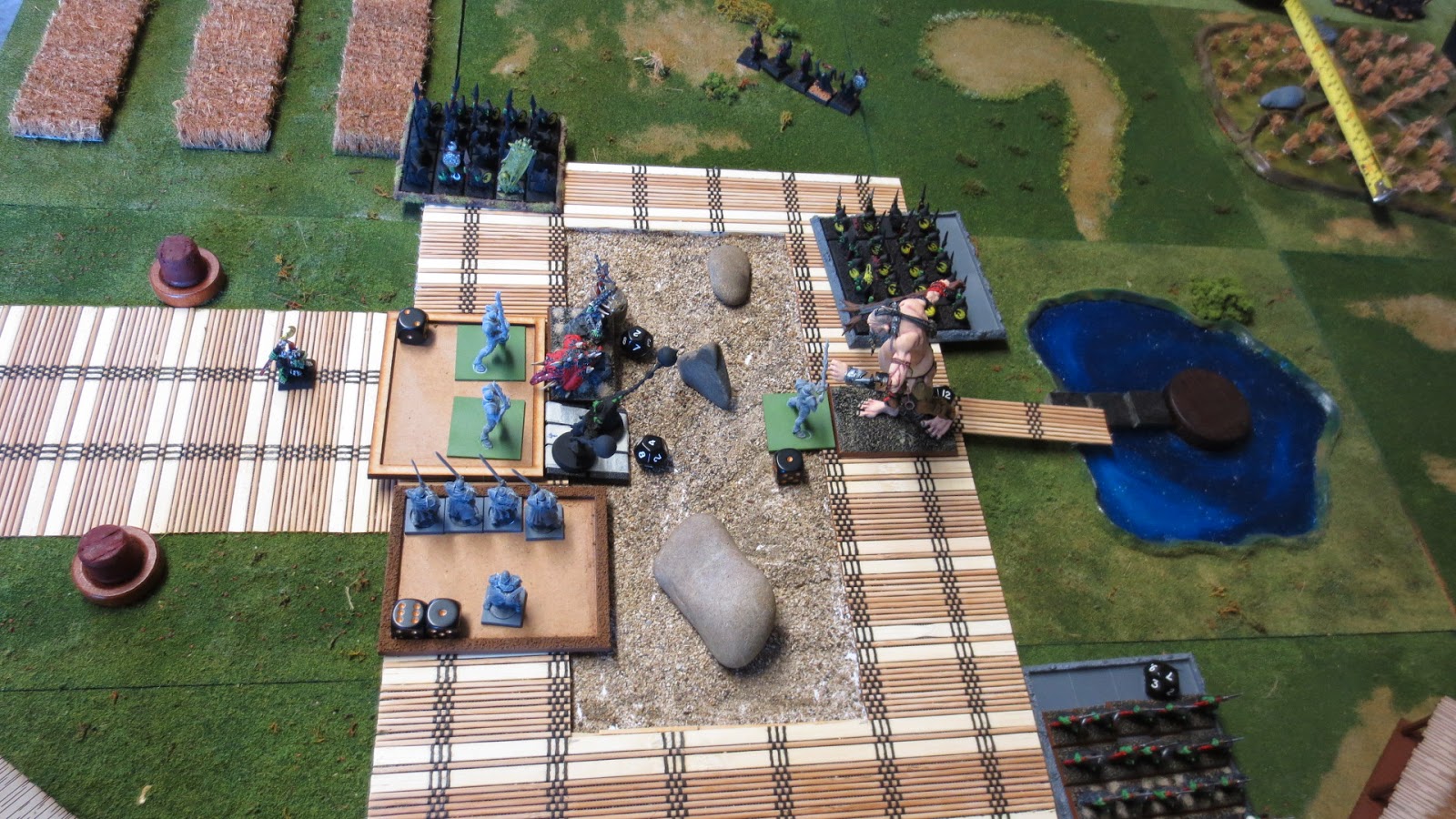 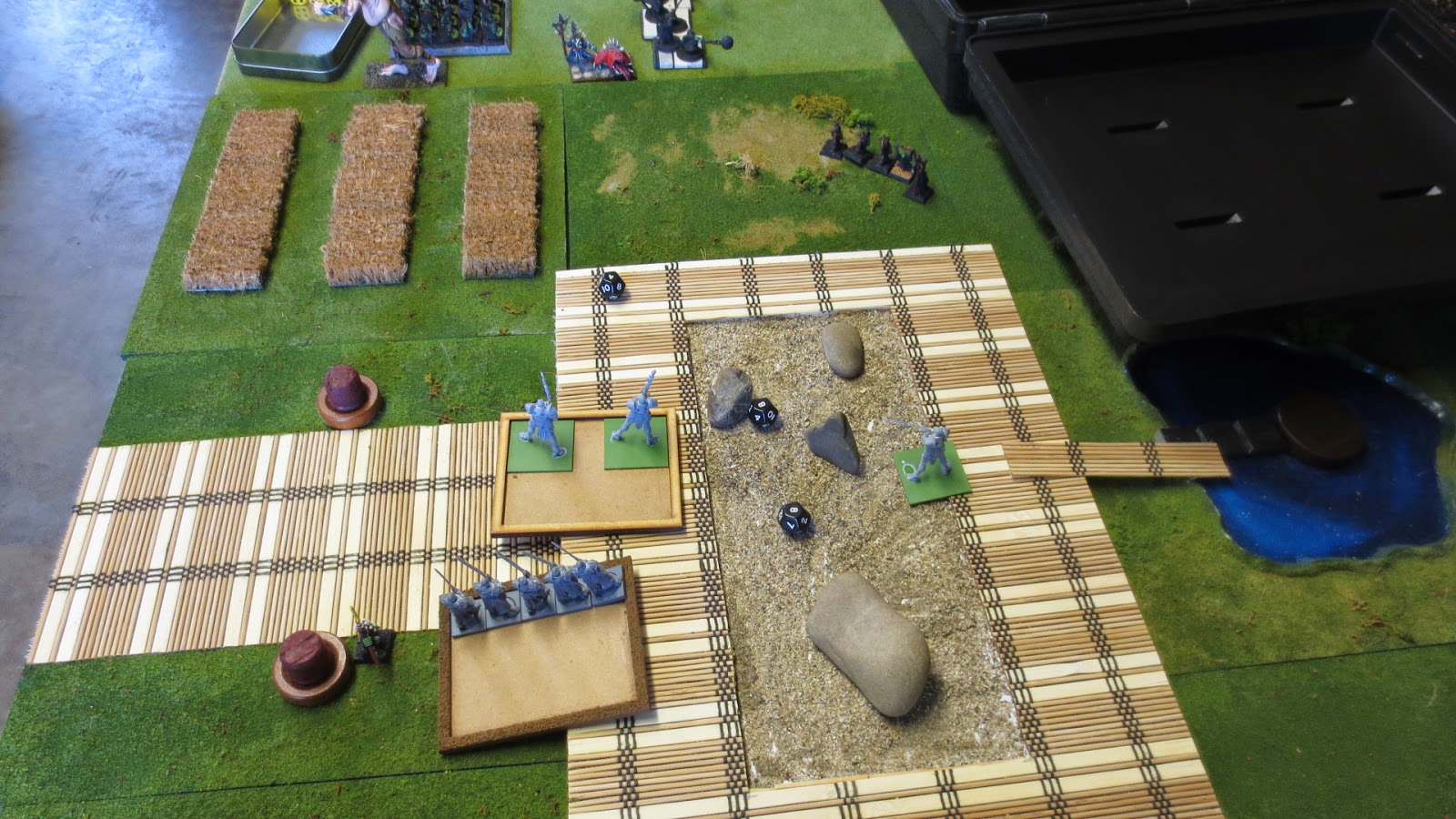 The aftermath of turn 6. Elohoi Regiment got charged in the flank. Split attacks 6 each way (gobbo character, gobbo hero, sharpstick regiment). Somehow managed to win everything despite being flank-charged. Rolled awesome for nerve tests, making everything run away.

The only goblin survivor is a very nervous looking shaman… 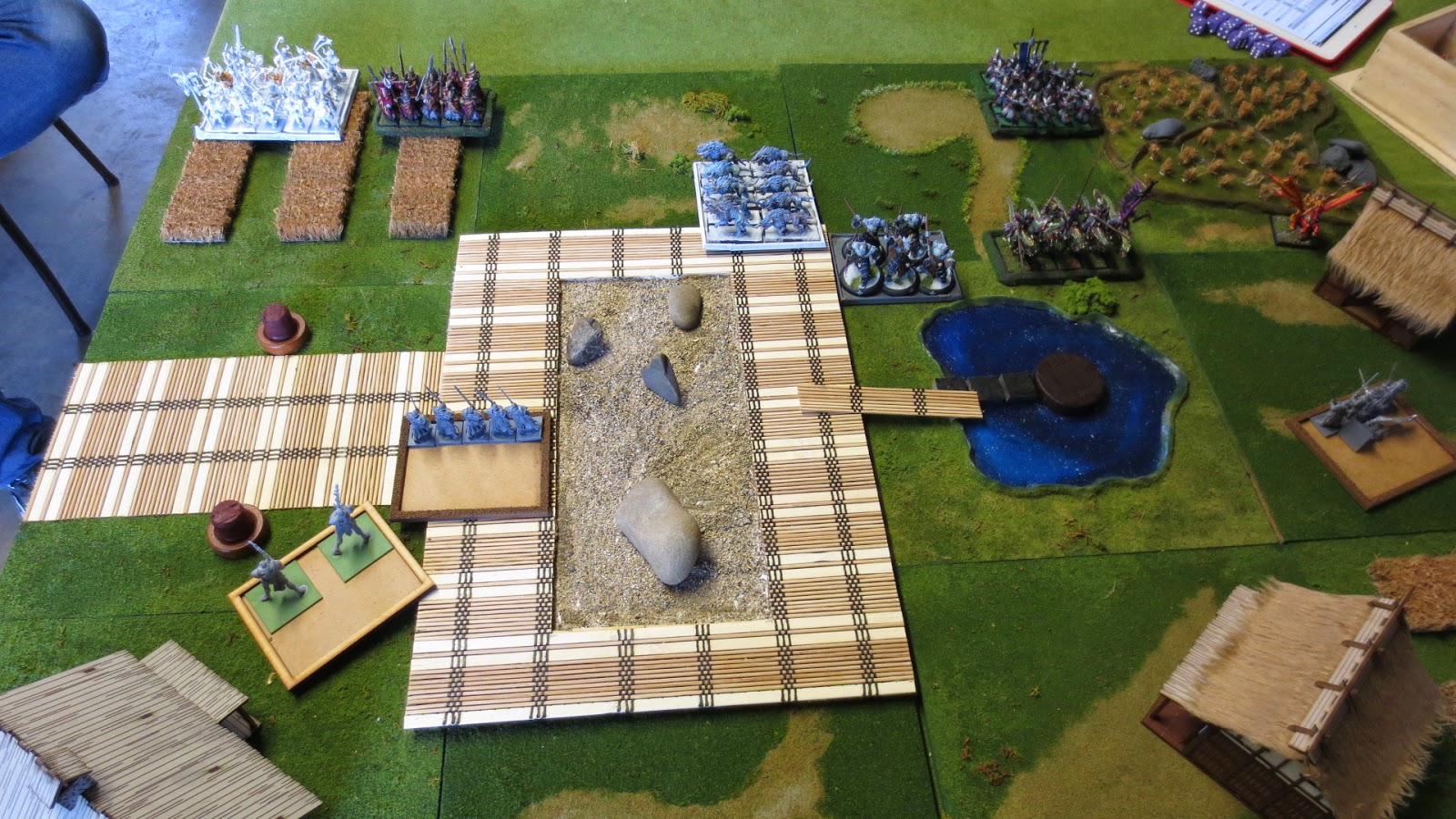 After that, played against Rob's Dark Elves (or Twilight Kin as Mantic calls them; semantics). He had a queen on a dark pegasus, knights, ogres, lower abyssals, warriors, spearmen and crossbowmen. Still much bigger than my list.

Went my way pretty much from the get go, with the hiccup of losing an entire Paladin regiment to a stupidly good roll on Rob's charging knights. 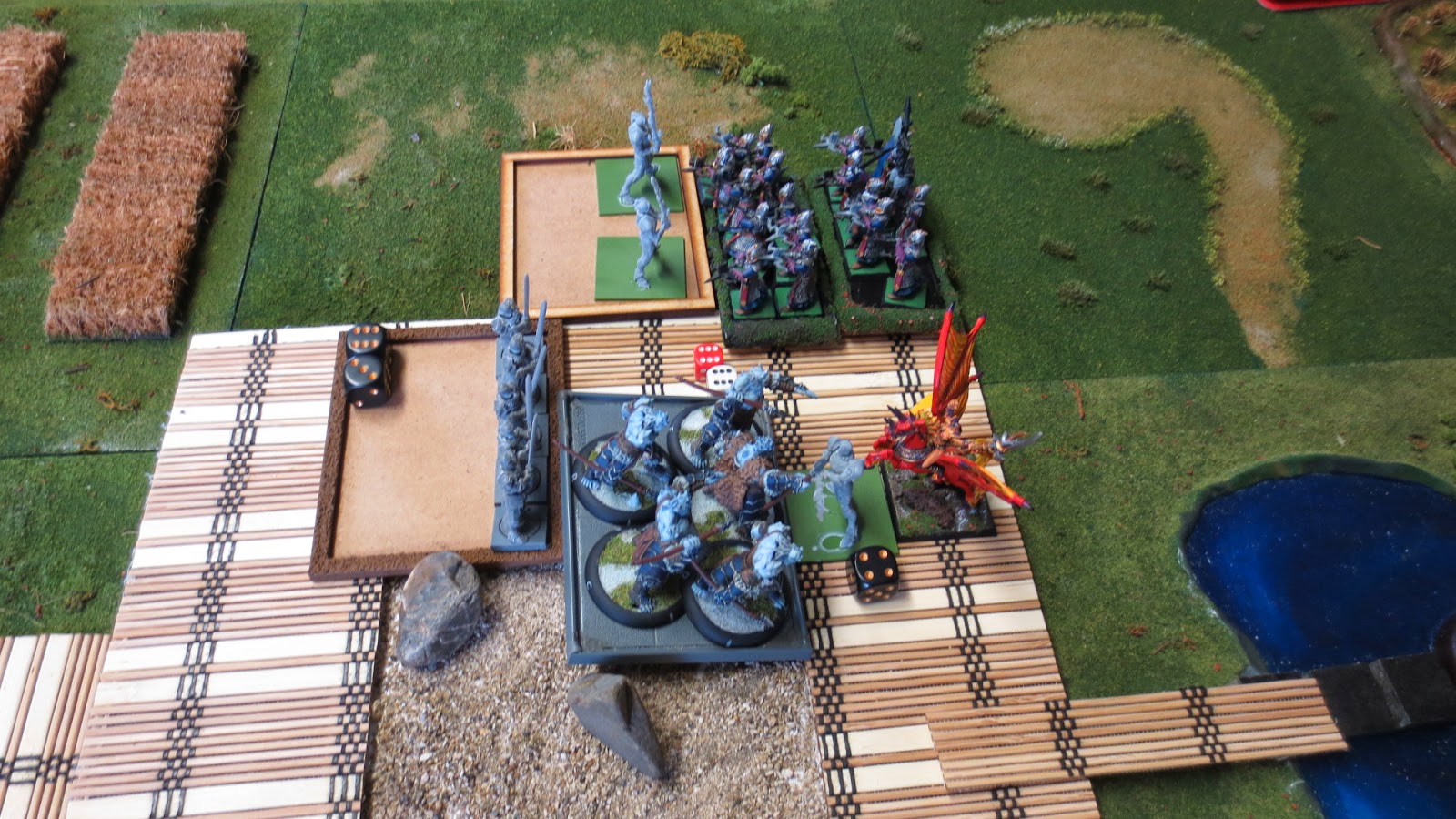 This was the most epic combat, running around the middle here. Paladins in the rear of the ogres who were facing my Ur-Elohoi who got charged in the rear by the dark pegasus. Lots of hits everywhere (especially on the Ogres and Paladins). Hilarity ensues when both Paladins and Ogres get snake eyes for breaking their opponent's nerve.

The Elohoi regiment makes ridiculously short work of the crossbowmen regiment at the top there. 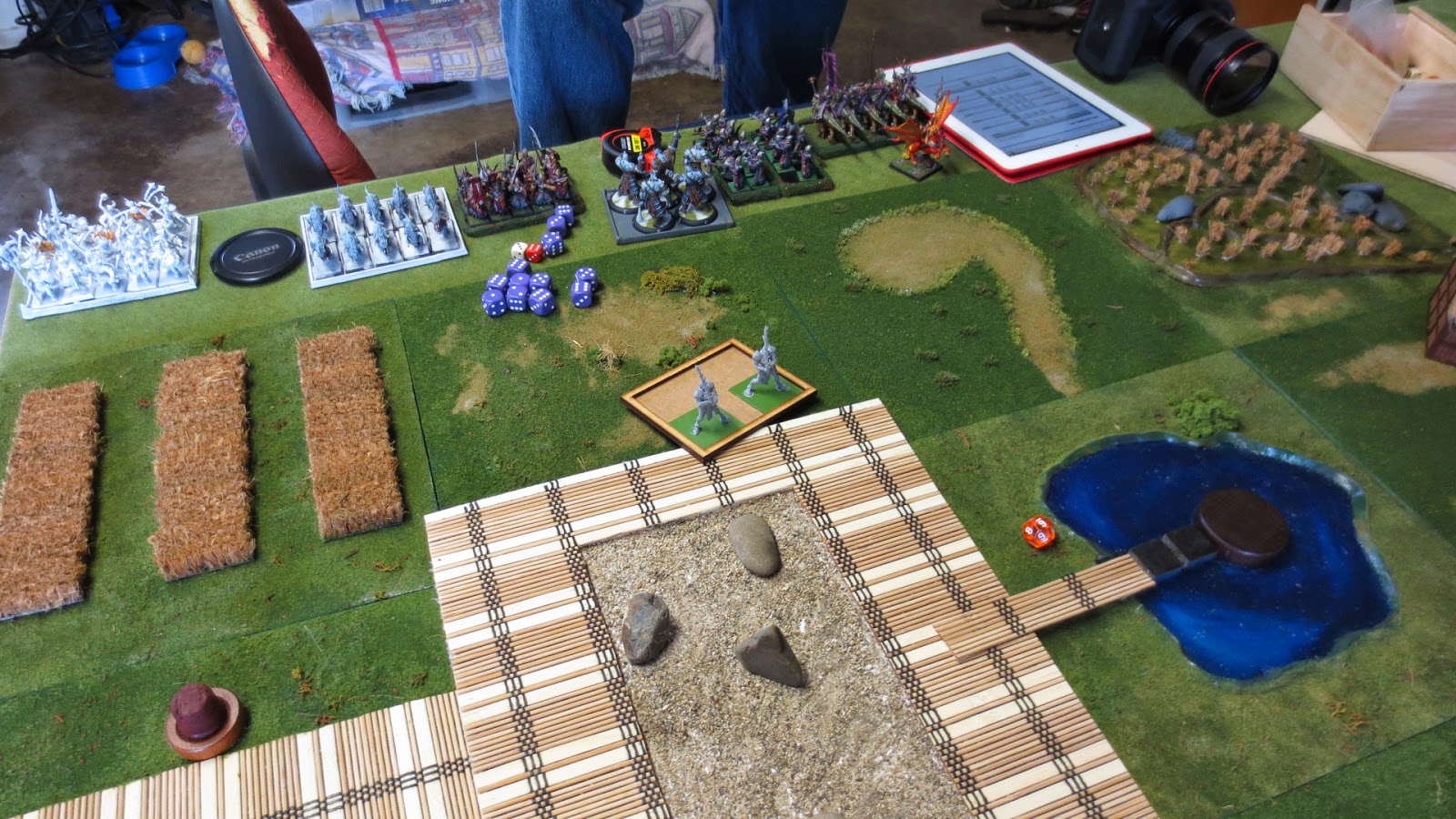 Final turn. The Elohoi regiment, virtually untouched, are the only ones left standing on the field of battle. Given that they hacked through a regiment of warriors, spearmen, and crossbowmen in consecutive turns, worth every point.

One thing we did find was that by making KoW simultaneous activation it messed up the meta for shooting. We're considering making the shooting phase first in order to combat that. Playtesting will see if that's right. We're also considering adding charge responses: Counter Charge, normal movement towards charging enemy. Evade, half move back. Stand and Shoot, make a shooting attack instead of making a melee attack.

Posted by Ravager Zero at 01:36 No comments: