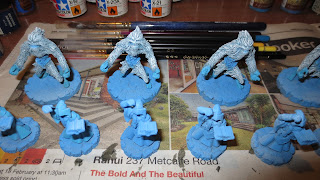 So, some more painting progress to round out the week. Wendigos all have their fur done, and the first layer of their skin. 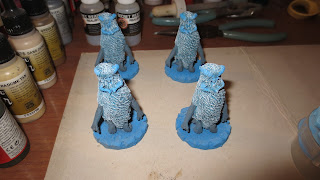 Gnoph Kehs, the sculpts have much thicker fur than the Wendigos, so even though the same techniques were used, they have more of the base colours showing, which I actually like. 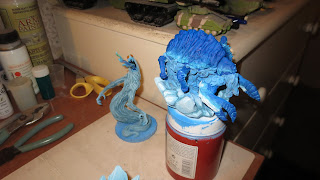 Rhan Tegoth, with some more progress. The colour scheme (or start thereof) is inspired by the electric blue crayfish. The tentacles hanging from his—its?—sides will be white/off-white.

Ithaqua is in the background, his breath painted like an aurora, and his eyes glowing a baleful orange. Not actually 100% happy with the OSL for the eyes, but we'll see what a glaze or two can do. 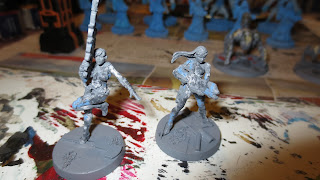 And some Infinity progress too, all camo base colours done on the Spitfire Asura and the Mk 12 armed Proxy Mk5. Next up, black-lining.
Posted by Ravager Zero at 03:15 No comments: 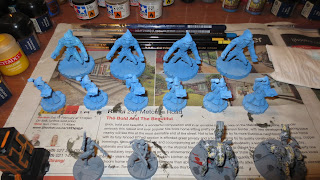 So, the smaller monsters and cultists for Windwalker. Not really anything yet, just basecoated. Wendigo on the far left has been drybrushed two stages.

In the front rank are some Infinity minis, still untouched from a fortnight ago. I need to rectify that. 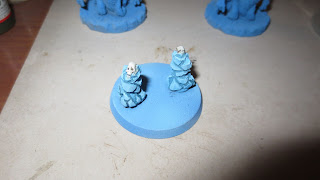 Power markers, trying to do an ice effect, yet to add power glow/OSL to it. Might try and show a translucent core effect. 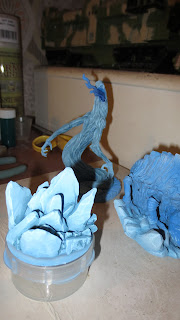 Ice Age marker, Ithaqua, and the icy base of Rhan-Tegoth. Particularly proud of the ice effect, taking about a dozen stages each. Disappointed it won't work as well on the heavily textured regular bases for everything else.

Did some two brush blending on the ectoplasm/breath Ithaqua is exhaling. Still needs a lot more work. 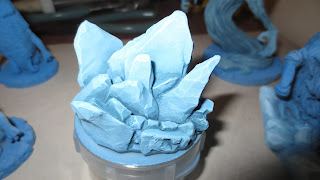 A closer look at the Ice Age marker. I'm thinking it'll benefit most from a satin/semi-gloss varnish.
Posted by Ravager Zero at 04:28 No comments:

Sacrifices were made — Black Goat complete

So, finally finished painting up the last of the Cthulhu Wars core set, with Black Goat now done. 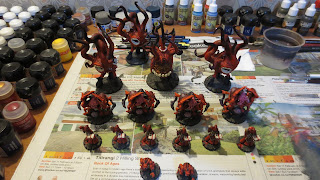 Faction shot, everyone(-thing) in all their glory. There is much redness. I chose black as the contrast due to most shub-niggurath imagery being very dark in tone. 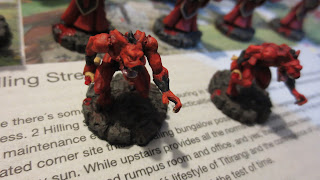 Ghouls, eaters of the dead. These guys turn up after everyone else's battles, giving them essentially free movement.

Yes, they are holding severed arms. 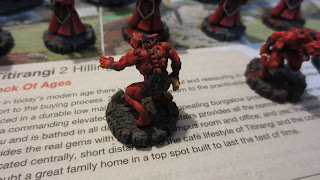 From behind, a darker red on their backs, and black/grey pelts around their waists. 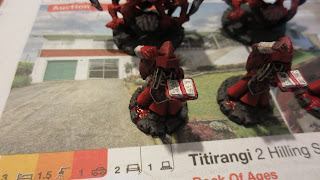 Cultists, all with bloodied hands. Sacrifice is a large part of Black Goat's shtick in the game, so I though I'd give the cultists a touch of that 'personality'. 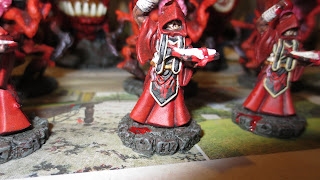 Black Goat faction symbol, painted on all banners. Annoyingly it looks almost as ant-like as it does goat-like. Still, fairly please with how well it came out against the black. 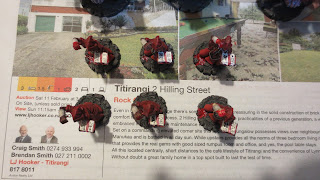 The six spellbooks. As usual, all of them are different, and each of them relates to either a core mechanic, or a faction spellbook. 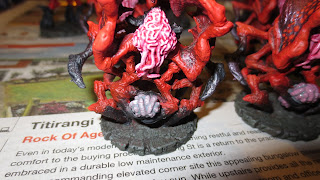 Fungi, wasn't really sure how to go about these guys, decided to go insectile in the end, with human brains. What they're carrying is up for debate, but I tried to paint it like decaying brain matter. 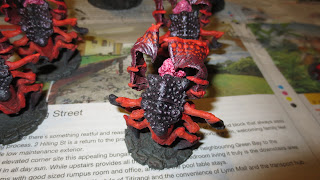 Rear carapace on the fungi. Sort of a pearlescent effect. Similar for the wings, to be like certain beetle elytra. The mottling was attempting to blend the wing surface into the 'arm' it sprouts from. 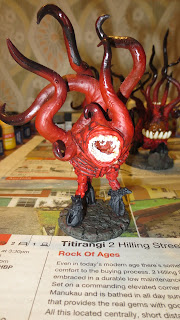 Dark Young, from the front? At least, I think it's the front… two legs and the biggest mouth. 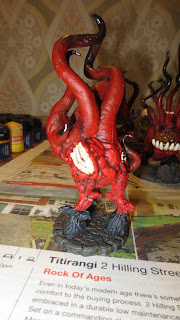 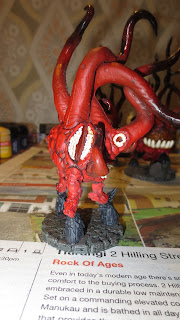 Dark Young from the other side (and the other, other side, above). As you can probably tell by now, it's hard to tell which way is forward with these guys. A mix of varnishes was used to get various effects, Satin+Matte for the hooves, Gloss for the teeth, and realistic water (feathered out via two brush blending) for the tentacles. 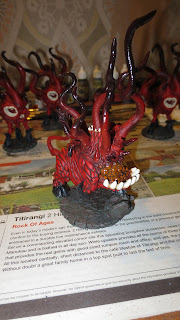 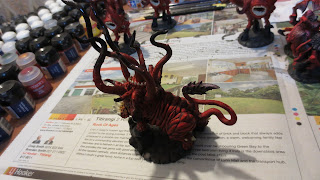 Shubby from the other side. The same varnish effects from the Dark Young are used here. 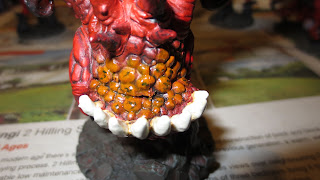 A close up of Shub-Niggurath's face. She doesn't have eyes, and I wanted to do something a little different, so each of those dark 'swirls' is supposed to be an embryonic predator of some kind, held in her egg-sacs. It is, after all, a fertility cult dedicated to monsters…
Posted by Ravager Zero at 03:59 No comments: