First up, the table.
In the middle/right is the Tower of DOOM[TM]. (This is an unholy conglomeration of 2 D5 Apartments, an L building, and a Guard Tower, along with assorted goods from Antenociti's inside).

My objectives were Assess, Ambush, Collect, and Advance.
Rob had Kill the Pigeon, Search the Crate (revealed by Ambush), Blockade, and Hold.

Rob won the initiative roll, and opted for the deployment option, choosing the edge of the board with more open fire lanes. This meant I had more cover for deployment, but my forces would be hard pressed to support each other on the left flank. 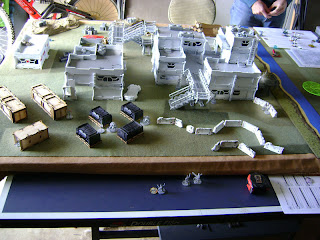 I also had to deploy first, starting with 2 models in hidden deployment, then placing everything else bar an infiltrating Naga as a reserve model. 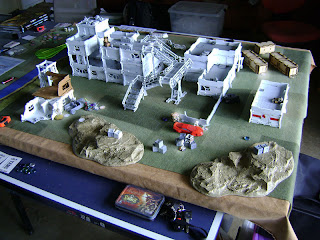 Rob's shasvastii were deployed as far forwards as possible, his Speculo appearing almost next to my Asura (but out of LoF, as I had chosen to take first turn).


During the first turn, things started badly with the Naga hacker failing to identify the Speculo not six feet in front of him (rolled a 20). He turned and ran like little bitch, re-camo-ing behind a large crate. My Asura moved up, showing everyone how its done by declaring a double a discover then rolling a 2 and a 5. Legend.

Next order saw the Asura open fire, with the Speculo failing its dodge (someone else rolls a 20.) Despite all this, the Speculo passes 2 saves, falling unconscious in the dirt. This leads to the picture below, just before my Asura delivered the coup-de-grace. This would prove to be the start of an unholy rampage on the Asura's part.


Rob's turned started with his Gwailo jumping into the building with the civvie in it, then declaring a coordinated order with a spitfire Noctifer against my Asura. I declared a dodge, rolling a crit, much to Rob's annoyance.


The next order saw the Noctifer fail to kill the Asura in spectacular fashion, taking a DA round to the face (another crit). Rob was… less than pleased with this turn of events.


What followed next has to be the most hilarious alien on human violence available in Maya or Arachne, with the Gwailo failing three times to kill the civilian.

This led to my next turn, with the Asura bashing through the door and smacking the Gwailo in the face with a power-armoured fist. This lead to another knock-out, and another coup-de-grace. Now my Asura was up to 3 kills on her own.

My Asura then walked up the left side of the field (now completely empty of Shasvastii), and collected the documents (or… uh… something) from the  spawn embryo left by the Aswang. Then she killed that too. Close combat is easy when your opponent can't fight back. More on that later.


My last act was to reveal my Dasyu on the rightmost catwalk, ready to ARO the seed soldier deployed opposite if it so much as twitched after it hatched.

This rounded out my second turn, leaving Rob free to act on his objectives, Searching the Crate, denying me my VP from Ambush. Then, with canny use of a coordinated order, using Sheskiin, a Q-Drone, and his Noctifer LT (who I only found out was the LT somewhat later) to attack my Zayin in the middle of the field.

Being a daredevil sort, I opted to shoot back at Sheskiin, who was at -9 to shoot me (Cover, Low Vis through a building, and -3 range), while I was at -3 to shoot back (+3 range, -3 Cover, -3 Low Vis). I actually hit Sheskiin, twice, but Rob finally managed to pass an ARM roll, so she didn't die.


My Zayin then had the good graces to promptly explode as everything else shooting at it ripped it to shreds.

Hoping for a lucky roll, Rob declared a dodge with his seed-soldier, who promptly ate a DA sniper round for his trouble. I love my Dasyu sniper.

This rounded out Rob's second turn, leaving us at 1 VP a piece.

My third turn started well, with my proxy 2 hacker appearing atop a roof, camo-ing again, then popping up and shooting the accursed Q-Drone. Note to self: Mimetism on TR units is broken. Somehow the proxy managed to miss both BS shots, taking a face full of HMG for her troubles. Through some jammy rolling I managed to save all but one of the hits.

She then coordinated with my Asura to launch a daring jumping shot to a nearby catwalk, while the Asura shot the Q-Drone and nearby Noctifer. The Q-Drone shot at the Asura rather than the proxy hacker, and somehow managed to win the FtF roll despite my BS of 17. Then I failed my ARM roll for the one hit that did get through.

The Noctifer had the good graces to keel over, not quite dead. My proxy then hacked the Q-Drone, ending my turn. I was surprised when the first order of the following turn was not to Reset the thing, but scoot over a slave drone to the Noctifer. Then pass a Doctor roll (Rob's doctors have a… reputation).

That done, the Malignos hacker that opened the crate then knocked out my proxy 2 hacker. This was followed by Sheskiin rounding the corner and firing at my Dasyu and proxy 1 engineer. All three combatants failed to hit anything. (Yes, I realise I should've spent the Proxy's ARO to actually inhabit the body, but thankfully it didn't have effect on the game).

Sheskiin then ducked back, finishing her move, and letting the Noctifer run to the building with the civvie in it. It had been clear from the start what one of Rob's objectives was. Almost laughably so. What made it funny was the continual ineptitude of his models in CC.

This was evidenced when once more in combat against the civvie, even with two tries, he couldn't land an effective blow. (oh, and the fact I was rolling ARM rolls like a champion for the little civvie.) This ended Rob's third turn.

My fourth turn started with the Dasyu and Proxy advancing in leapfrog on Sheskiin, putting down the Seed-solider's spawn embryo as they went. The Dasyu lost a nanopulser duel with Sheskiin, taking a wound, then as the proxy shot past, the Dasyu took another wound as Sheskiin used her nanopulser again. Then the proxy 1 finished Sheskiin off with a sustained burst of combi fire.


The second half of my turn started in spectacular style. Rob's Q-Drone was still immobilised, allowing my Asura to rip it to shreds with DA ammo. Four failed saves was quite impressive. This also gave my Asura LoF to an Ikadron Batroid hidden in the back, enough to complete the Assess objective.

My Asura then tried to follow Rob's Noctifer into the building, but tripped across the same ledge. My last order was to shoot into combat, hoping my superior BS would stop me hitting the civvie. I hit the Noctifer twice, and Rob managed to pass all four ARM rolls this time. Things were getting desperate.

As Rob started his fourth and final turn, he was well and truly in retreat, but there was only one thing that mattered, trying to kill that damned civvie. I suppose what happened next would best be described as the civvie kicking the shasvastii in the goolies, shortly before my Asura shot it in the head. It was a risky ARO, but hell, if Rob's Noctifer stayed in combat there was the slim chance it might actually do some damage.

So there, at the bottom of the fourth, we both stood on 2 VP's, and a good game all round.

My Asura accounted for half Rob's force single-handedly, and the civvie was awarded man of the match—despite being proxied by a rather stiff Garuda.
Posted by Ravager Zero at 00:59 No comments: