So, a few weeks back I finally received my Cthulhu Wars kickstarter bundle. It was pricey at the time, but now having it in my hot little hands it is totally worth it. There are some 72 miniatures in there (though that's a slight cheat because 8 of them are little power tokens, but I digress), and the largest of those are the great old ones, with Cthulhu himself standing nearly 8" tall to his wingtips. The others aren't far behind.

They all start out completely unpainted, but for a game this awesome, that just wouldn't do, so I grabbed out the airbrush, mixed up some "deep sea" colours, and got started. After something like 20? hours I have now finished one entire faction… Great Cthulhu, of course. 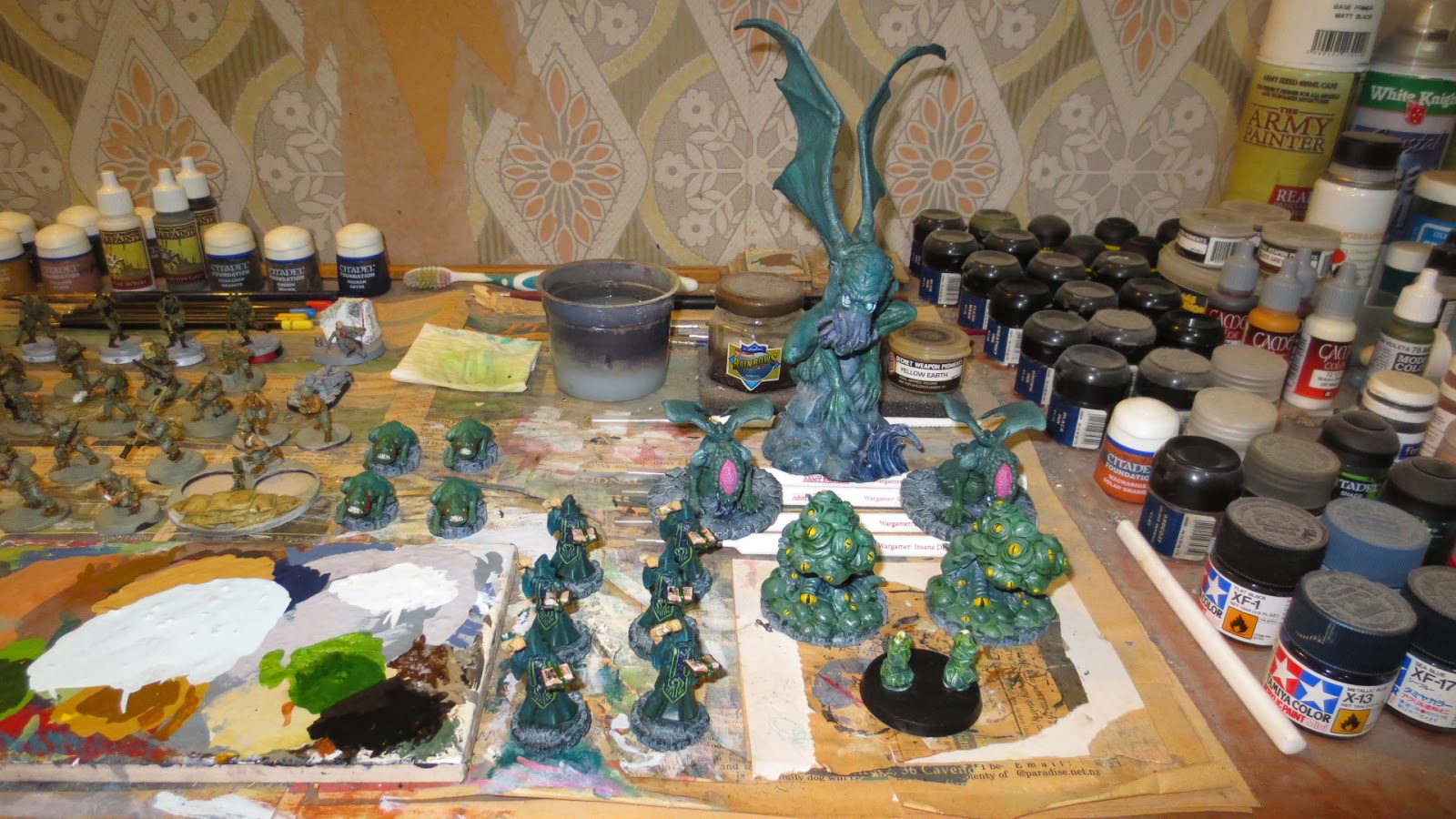 That's everything as it stands on my painting desk. 4 Deep Ones, 6 Cultists, 2 Shoggoths, 2 Star Spawn, 2 power markers, and of course 1 Cthulhu. 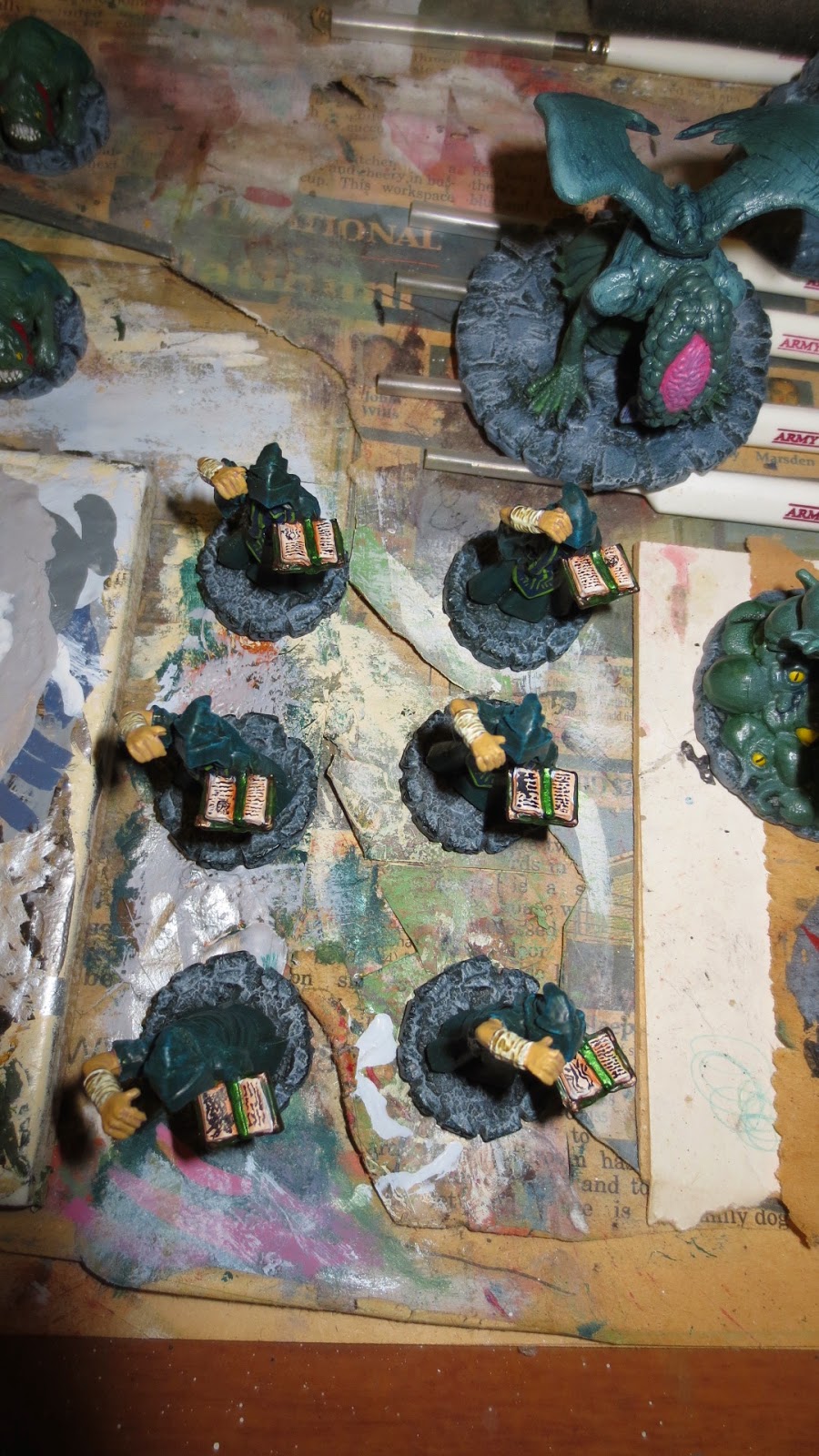 These bad boys are my cultists. In the game they are your most important units, the only ones capable of building and opening gates to the realm of the great old ones. And yes, each of those spellbooks is different.

These guys actually took the longest to paint, mostly because they have so much fine detail on them, and perhaps because I'm a little nuts. I still have to touch up some belts and daggers before varnishing them. 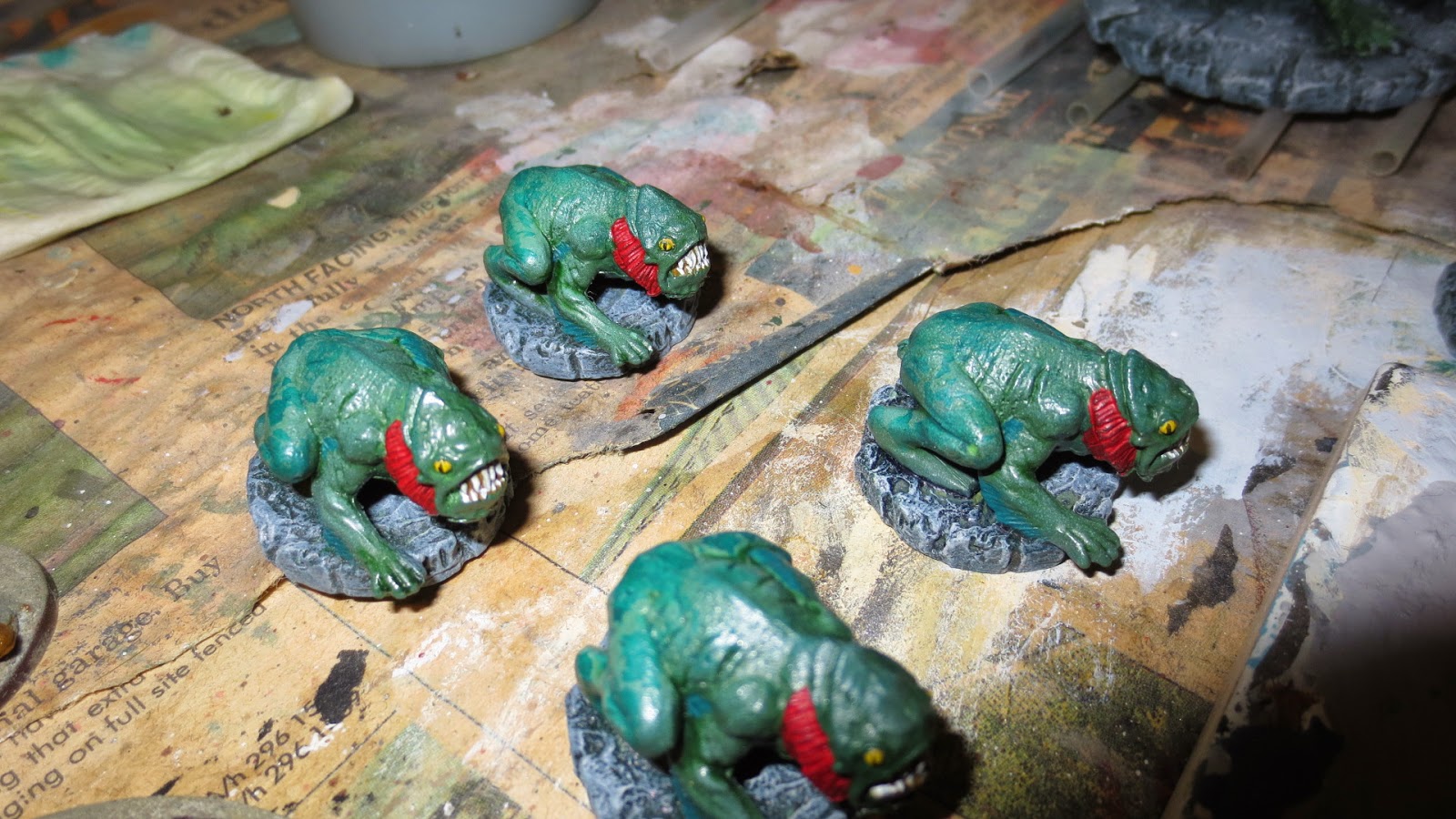 Deep Ones. Basic monsters, and good for defending cultists. Or if you want you can simply turn your cultists into one of these, preventing an enemy from capturing them. 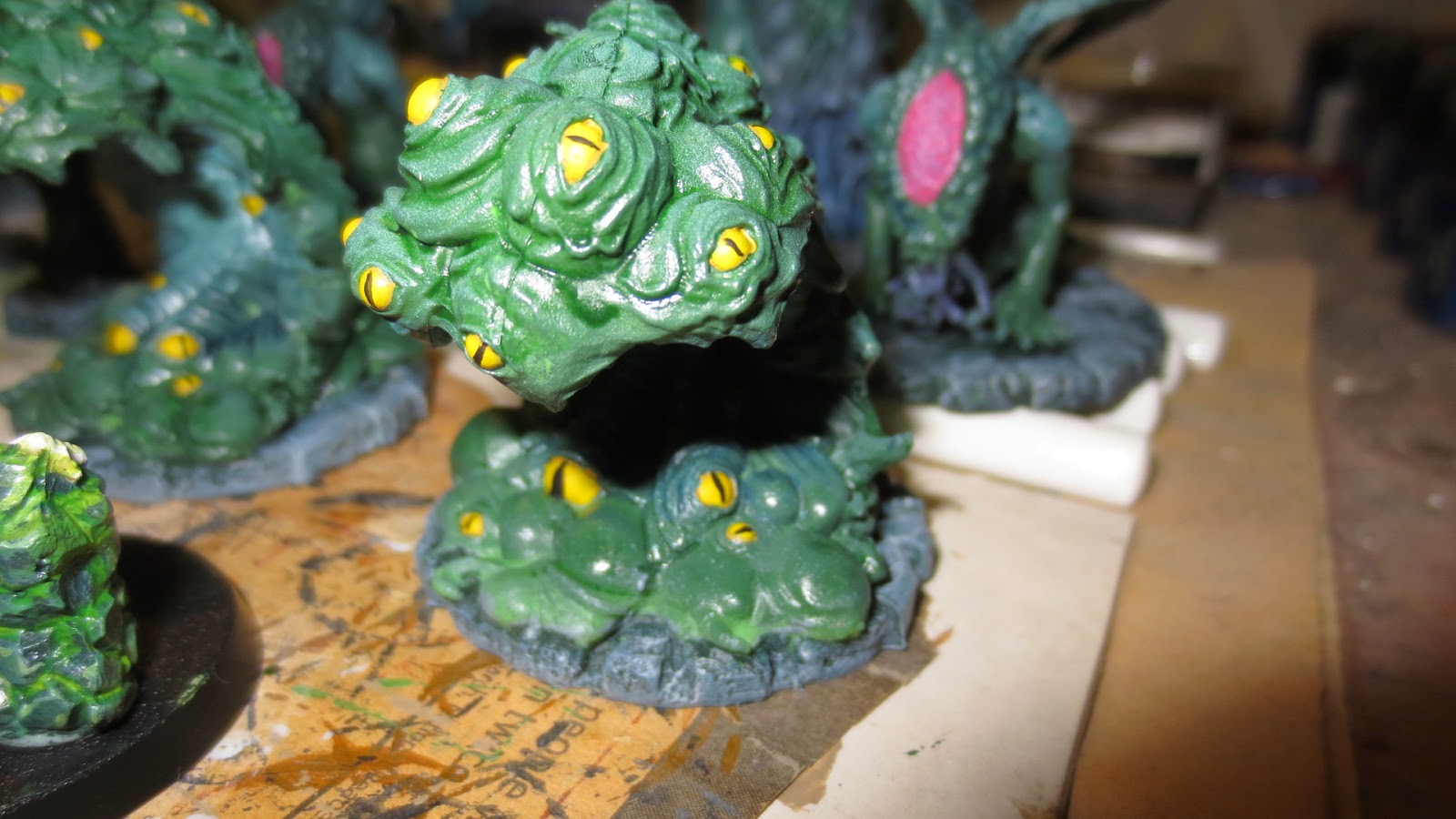 Shoggoths. These will eat anything, and gain a combat boost if they do. 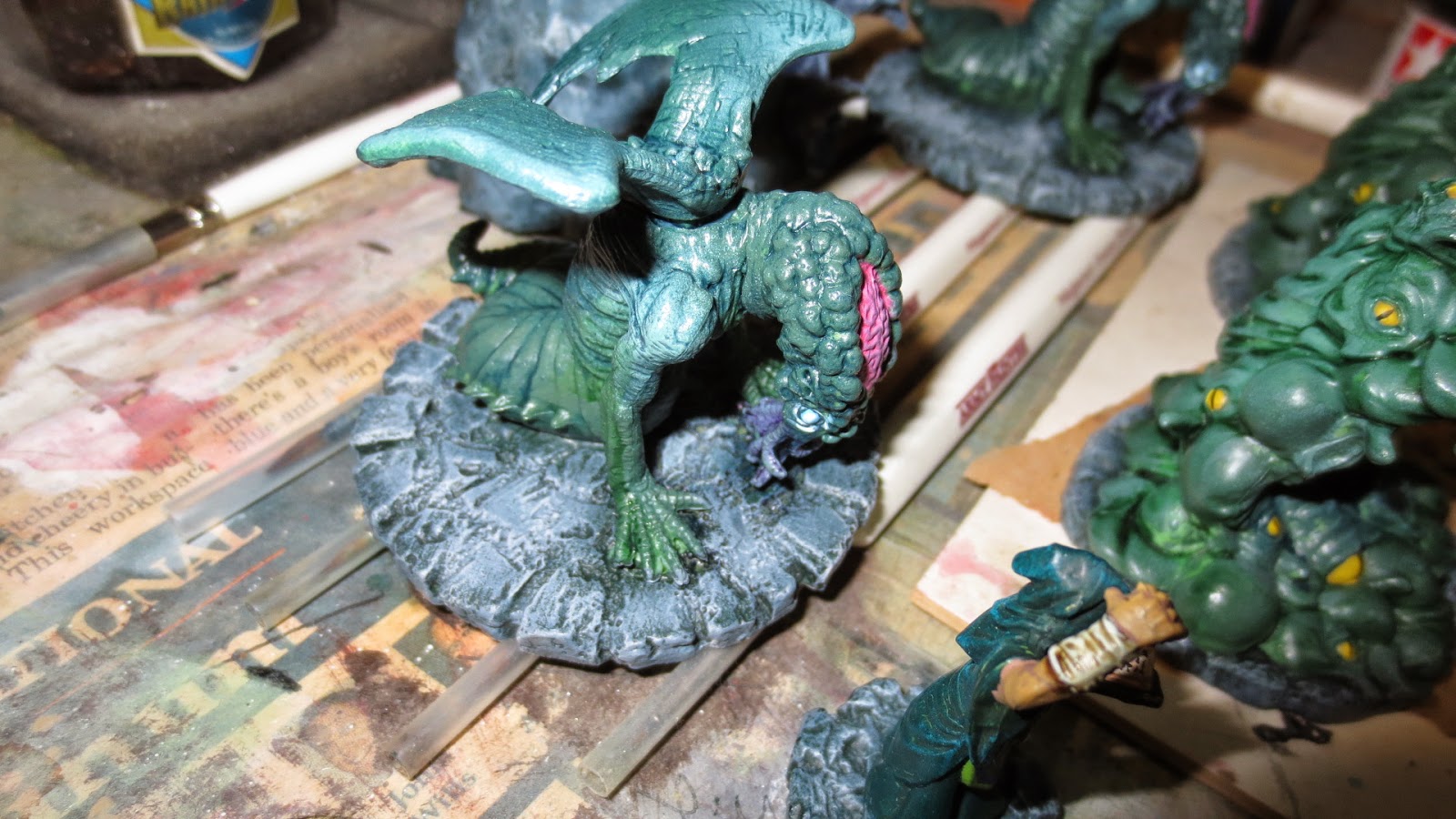 Star Spawn. With the right spellbook these guy become nigh indestructible, and are possibly the best pure combat monsters in the game. The other factions have a lot of tricksy abilities that can negate that potential though. 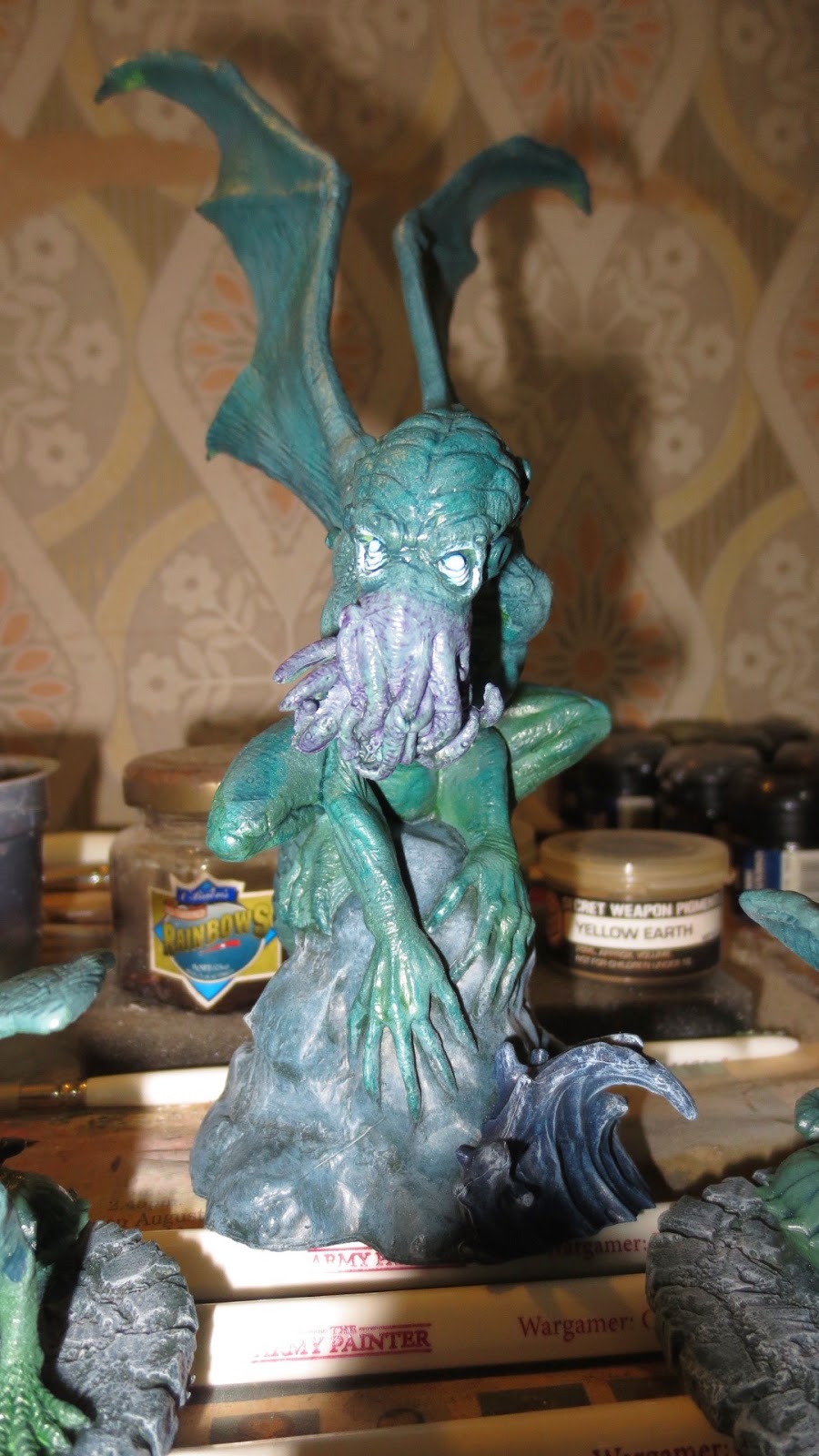 Cthulhu. Not looking so great due to some camera flash, but most of that is airbrush colour plus several washes. In the game he's the simplest great old one both to summon and to use. He's also very, very cheap to re-awaken due to being, y'know, immortal.
Posted by Ravager Zero at 00:32 1 comment: