Bit of a delay between posts, I know, but they're finally done. Sleeper has been completed. Apologies about the bad lighting, but it was an improvised setup. I might try and make a decent lightbox in the near future for better photography of stuff like this. 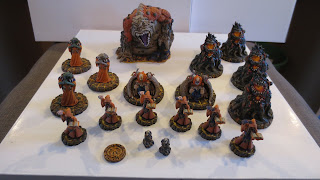 The Sleeper faction, in its entirety. Painting so much orange was an interesting challenge. I've also stayed within what seems to the meta for painting Sleeper bases and have glowing lava in the cracks on black rock. 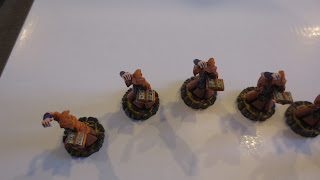 Top down of 4/6 cultists, showing off the individual spellbooks they each have. Each spellbook is either related to an actual Sleeper spellbook, or a game action (like building gates, or summoning). 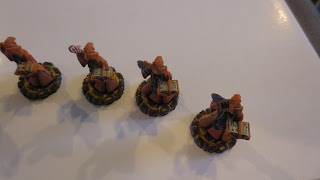 The other 4/6 cultists (yes, I caught the middle two twice). Spellbooks, and you can see the attempt at the lava effect on their bases much better here. 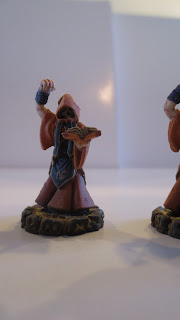 Close up on a single cultist, showing the faction glyph on the tabard, and the dagger at his belt. 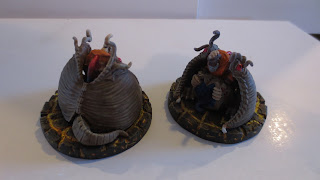 These guys are the Wizards. Not much in combat, but their spellbook is outstanding… they can take an action in the area where a battle occurs before the battle starts. Any action.

Figuring out a decent colour scheme for these guys was actually quite challenging, and in the end I had to go with a lizard style beast, and a simple human rider. 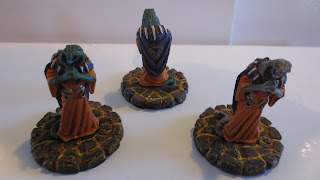 The Serpent Men, who are more useful outside of combat than in it. This is because outside of combat, they can copy the unique ability of any faction. The possibilities for insane combos are excellent.

My first attempt at snakeskin. Note that these were actually mostly painted before I started Yig and his many snakes… 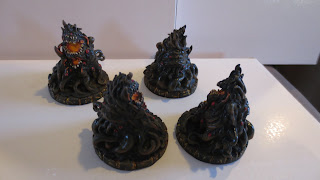 Formless Spawn… these bad boys are where Sleeper gets most of its combat heft. They're expensive, and weak at first, but the more there are, the stronger each one gets, and stronger still if Tsathoggua is present.

The OSL glow on the maws was actually easier than expected. The underglow from the bases was much harder, and involved many steps of shading and drybrushing, but I think the end result was worth it. 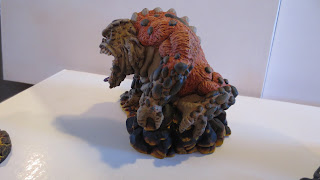 Showing off some more detail on the great beastie himself, Tsathoggua. The skin was painted to be like the lizard flesh of the Wizards, embedded with solidified versions of the material the Formless Spawn are made from. The orange fur was mostly to make it easy to tell which faction he belongs to—but it works well against the lizard skin and black rocks.

The base is painted with OSL techniques as if the lava was immediately below it. I'm not 100% sure I got the technique right, but for now, it's good enough for me. 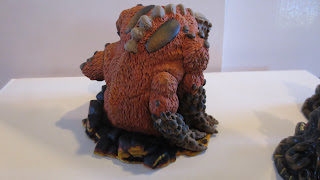 Posted by Ravager Zero at 23:36 No comments: