It's been a loooong time since I posted anything (for those actually following/checking timestamps).

I have got stuff done, although my progress is slow. I get easily distracted by writing, videogames, and playing shiny new games with the group here.

I digress, so back to the point: Tcho Tcho, in all their unnatural pinkness. 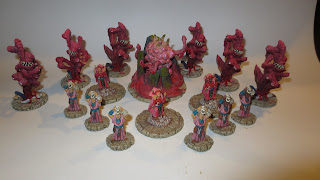 The whole faction. Unique amongst the other factions in that they have 3 High Priests, regardless of whether or not the High Priest expansion is in use.

Many Tcho Tcho Spellbooks revolve around the use, sacrifice, and recruitment of High Priests. 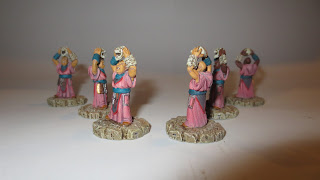 Cultists. These were the first to come with custom sculpts, rather than the standard "robed acolyte" type.

I have the custom cultists for all other factions, and will paint them in sets, after my next project is complete… 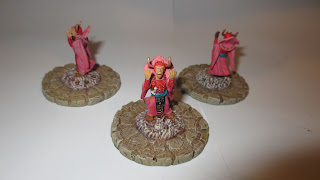 High Priests. All atop a mound of bones, chanting their blasphemies. Their key spellbook is Martyrdom, allowing a single kill against a High Priest to turn all other kills into pains instead. 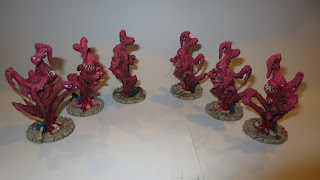 Proto-Shoggoths—not particularly powerful as monsters go (Tcho Tcho are not a combat heavy faction), but they can get a spellbook to either boost their attack, or drain enemy attacks.

These guys were painted using zenithal techniques, along with some very heavy washes and light drybrushing. Feathering was used extensively to blend the flesh colours into the pink shades. 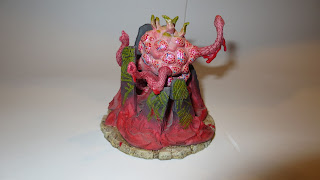 Ubbo-Sathla, restrained by stone tablets of eldritch power. Ever reaching, ever ravenous. 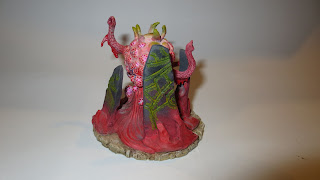 It was quite simple to paint Ubbo, most of the problem being how to block out and break up that much pink. Iridescent paint was used on the erupting masses/tumours, while green was feathered on to the top surfaces to show the limits of containment. 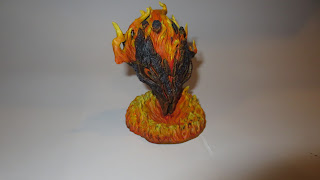 Cthugha, king of the fire vampires, and perhaps my most ambitious attempt at OSL and fire effects.

I used a lot of washes and shading down from white on the fire, rather than blending up from black. There are also numerous mid-stage glazes to try and blend the fire effects as seamlessly as possible.

The OSL I couldn't quite get on this scale, so I went with an edge wash and narrowing highlight instead. 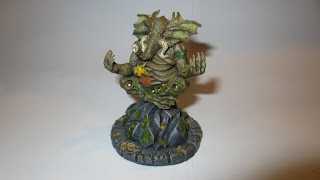 Despite the elephantine appearance, I wanted to use a more naturalistic palette, trying to make it look more like part of a forest had come to baleful life. This is also the reason for the flock, leaves, and foliage scattered on the model.