Some things finished, and some more painting progress over the last week.

First up, that which is finished 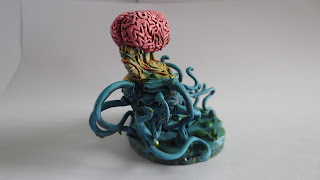 Abhoth, lord of filth and pestilence. In the mythos, things grow in Abhoth's lair, repulsive, unwholesome things that are often re-absorbed or eaten by Abhoth itself.

In the game, Abhoth spawns Filth tokens, which are a sort of monster, and Abhoth's spellbook is acquired, Filth prevent enemy gates from gathering power. 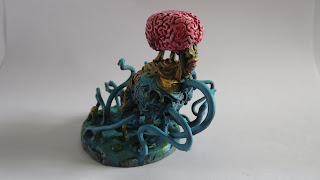 Another side shot, showing off the brain and tendrils again. Lots of ragged flesh too—and during the painting of which I learned a lot about wet-blending, an advanced technique. I'm actually trying to use more advanced techniques as I move through my collection here so I can improve myself as a painter. 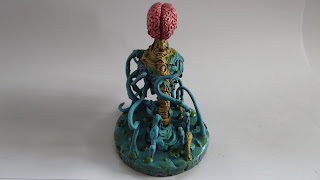 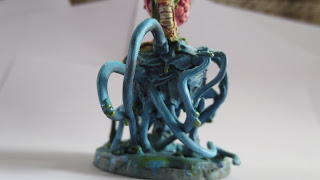 A low angle shot, showing dripping slime on the tendrils and body—and also giving an idea what those poor mythos investigators must be seeing. 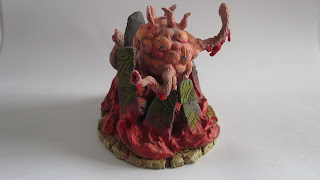 Along with finishing up Abhoth, I managed to complete the great old one for the Tcho Tcho faction.

Ubbo-sathla is a writhing mass of flesh and hungry mouths bound by arcane powers to feed the plots of the Tcho Tcho. 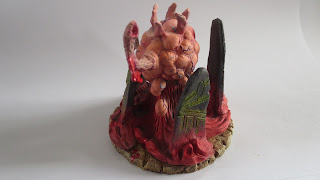 In game, he's nothing special—except he gets summoned for free in the Doom Phase if you sacrifice a priest, and his power grows even he's dead… 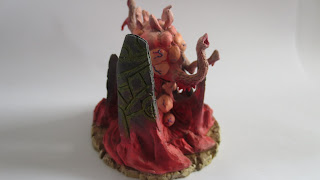 No wet-blending here, more playing with OSL (object source lighting) to show off the glow on the stone tablets. 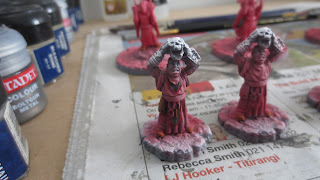 Cultists for the Tcho Tcho—these are custom sculpts, and were part of Onslaught 2. Having just received Onslaught 3 I now have custom cultists (unpainted as yet) for all factions. Expect a large picture dump to show off everything. 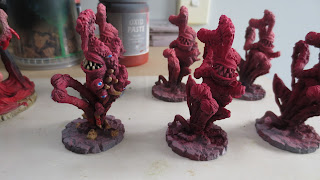 Proto-shoggoths, the only monsters the Tcho Tcho get access to. Pink make for an interesting faction colour to work with—and I'm trying to work within that limited palette, rather than around it.

That said, I have blended down to red, and then used some heavy washes & drybrushing to give better definition, but overall it still looks very pink, and characteristically repulsive, which is the point.
Posted by Ravager Zero at 06:14